The Hungry Grass by Richard Power review: last days of a doomed everyman 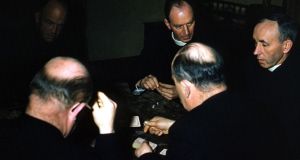 Ecclesiastical games: in The Hungry Grass (1969), Richard Power ‘evokes a rural Ireland which is both of the past and still very much of the present’

Fr Tom Conroy is an Irish Catholic priest like no other. His burden is not a crisis of faith; it is a crisis of life and how fate toyed with his destiny. His memories prevail as he battles the days, assisted by a maverick sense of irony and a blistering intelligence. He resides at the centre of a complex story which begins on the day of his death. Through the pages of this outstanding, neglected novel, Richard Power evokes a rural Ireland which is both of the past and still very much of the present as filtered through the experiences of a compelling central consciousness.

Sharp-tongued, unpredictable and well aware of the turmoil he incites, Tom Conroy is a formidable but vulnerable, all-too-human presence given to jaundiced observations. His fellow priests are uneasy when around him. One of them, earnest Fr Mahon, has always avoided Conroy’s eye, “fearful of drawing some judgment on himself”. Yet Fr Conroy proves oddly appealing as a doomed everyman.

Make no mistake: The Hungry Grass, which was first published in 1969 and is now beautifully reissued, is truly masterful, as funny as it is profound and insightful. Fr Conroy is a troubled man – “He had brains to burn . . . brains to burn” – yet regardless of his many demons, he is wonderful company and one of the most memorable creations in Irish literature.

Early in the narrative – which rewinds to the weeks preceding his death, intermingled with distant flashbacks and dream sequences – he decides to visit his sister, Kate. He plans on taking the day off, so he goes to inform his curate. The younger priest is on the lawn, practising his golf technique. Also present is a stranger in a “chunky white sweater and suede shoes”. While introductions are exchanged, the newcomer, whose name is Dickie, barely pauses as he swings the club and offers a glib “Hi”, nothing more. It proves a bit too casual. “Holy God, thought Father Conroy, what’s Ireland coming to? He wasn’t one for tugging forelocks, but there was a limit.”

Sweater man turns out to be a visiting priest, home from California. The curate mentions that “Dickie” – Fr Walsh – has some ideas about setting up a parish committee. Fr Conroy is unimpressed, and barks that “the country’s full of committees”.

Having unsettled the two younger priests, Fr Conroy proceeds to a mountain farm to visit his sister, the still-splendid Kate, who, having been disappointed in love, married beneath her. “He [Fr Conroy] always felt a twist of pain whenever he saw that vague, confident smile on her face . . . she a girl who had been taught to speak French, to play the piano, crochet, make sauce tartare, and keep accounts for a doctor or dentist.”

Kate’s husband, Mikie, is a slovenly individual possessed of limited social skills who succeeds in eating a meal without once taking his eyes off a marauding fly. Again, Fr Conroy marvels how his family could ever have allowed such a marriage.

The comedy is subtle and witnessed through Fr Conroy’s exasperated sensibility. His father died young, as did Conroy’s younger brother, Owen, and warning pains have left the good priest, a weary 63, with little doubt as to his approaching end. Despite his fatalistic acceptance, there are also his many regrets, most of which are about a life barely lived. He never had a vocation, and only entered the seminary after his older brother, Frank, had returned home, declaring the priesthood was not for him. Tom, in turn, decided to “give it a try”, and lost his claim to the family farm.

History shapes a minimal backdrop: the legacy of the Civil War; local politics; a passing reference to rural electrification; and the traditional tension with Britain, reflected in the minor resentment caused when an Englishman wins a good pony in the church raffle for which he had been pressurised into buying a ticket. (Even worse, the Englishman is a Protestant.)

England is seen as a place where Irish men go to seek work. Emigration as exile is a minor theme. There are also allusions to the social hierarchy, the farmhouse versus the cottage. So skilful is Power in the handling of the story that he allows the characters to do much of the telling through exchanges played out in pitch-perfect dialogue.

Conroy, the seminarian, with his flair for Latin and fearless responses, had once been offered the chance to attend university, yet declined. Subsequent wilfulness sees him dispatched to a poor parish. Nostalgic love for his father is balanced by a lifelong dread of his embittered mother, who, on being widowed, had withdrawn from her children and commenced her lengthy wait for death while continuing to live on in Rosnagree, the family home.

Frank never married. The fate of Rosnagree begins to preoccupy Fr Conroy, who decides that the two sons of his long-dead younger brother, Owen, are the natural heirs. Only he has never met those nephews. He travels to England via the Holyhead ferry to meet his sister-in-law, who, years before, had been obliged to pay for her husband’s funeral expenses, and all costs incurred by his family, with the money she and Owen had saved to purchase Rosnagree.

In one of several fine comic setpieces, Fr Conroy, his mind elsewhere, is approached by a friendly nuisance called Joe, about whom he had once remarked that he “thinks manual labour is a Spaniard”. The parishioner is a keen reader of newspapers and has an article with him. “There’s a bit in it about dreams. Remember what you were saying? It do say here that Shakespeare and other great writers got most of their stories out of dreams. There was a man called . . .” He searches the paper for the name. “ . . . Coleridge, now, and I was wondering if you ever heard of him, because I had a dream once that was very like the one they do say he had.” Conroy replies that he will read it “at my leisure”. But Joe intends to apply for a job, and has decided on “Curator of Manuscripts at Nottingham University.” He needs an immediate reference. “A man could do some literary work in a post the like of that. I was reading in the Sunday Express about a grocer in Wales who kept a notebook under the counter and, begod, didn’t he write three great novels.”

For all his caustic asides, Fr Conroy makes home visits, pens references for lunatics, and is horrified when he almost forgets Sunday Mass, is late and has not prepared a sermon. Elsewhere, he is bemused to discover that his housekeeper is reading The Brothers Karamazov, and for the second time. “I can’t pronounce the name, Father,” she says, but “It passes the time”.

As Fr Conroy’s health wanes, that of his politician uncle, the creepily slick James, at 86, flourishes, and he continues to attend as many funerals as possible.

Richard Power is a gifted stylist whose literary voice shares the eloquent menace of William Trevor. Both men were born in 1928, although Power died in 1970, aged 41. The Hungry Grass, his second novel, stands equal to Aidan Higgins’s Langrishe, Go Down (1966) and Tom Kilroy’s 1971 Booker-shortlisted The Big Chapel. Published in 1969, the same year as James Plunkett’s superb Dublin epic Strumpet City, The Hungry Grass is a far more sophisticated narrative, an Irish Stoner that has the pathos of John Williams’s quiet American classic but also adds biting humour. Plunkett created a giant in his Fr Giffley, but Power’s Fr Tom Conroy is a living man, an even more difficult feat to have achieved.