The FitzGeralds of Carton House – a deeply dysfunctional family: The Decline and Fall of the Dukes of Leinster 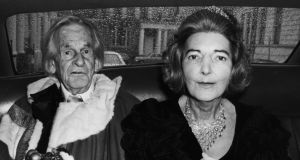 The foundations for this absorbing book were made possible with the discovery of a cache of letters written by Hermione Duncombe, the wife of Gerald FitzGerald, the fifth duke of Leinster (1851-1893).

One of Ireland’s premier aristocratic families, the FitzGeralds lived for almost 300 years in the Palladian mansion Carton House, outside Maynooth, in Co Kildare. Deposited in Somerset Record Office, Hermione’s letters have enabled Dooley, who has written extensively on the land question and the decline of Ireland’s big houses, to assess the private dimensions that accompanied the public crisis that afflicted the Anglo-Irish aristocracy in the late 19th and early 20th centuries, as social, economic and political change diluted its power, dominance and options.

Descended from the Anglo-Norman FitzGeralds, the family had been in Kildare since the early 13th century; by the late 17th century it was established at the heart of Anglo-Irish affairs. But by the time Gerald came of age, in 1872, change was in the air, and over the next 50 years nationalist revolutions, in land and politics, the first World War and the Irish War of Independence were paralleled by the family’s private experience of what is trumpeted in the book’s subtitle as including “love, debt and madness”. The reality, however, is that there is precious little love on display; this was a deeply dysfunctional family, destroyed by privilege and lack of love.

When Gerald became duke the Leinster estate was more than 28,000 hectares and yielded £40,000 in agricultural rents (£3 million in 2014 terms), but preoccupation with appearances and the desire to ensure continuity of the historic status of the FitzGeralds meant that “outward display was much more important than affordability”. Arrogant ambitions and snobbery generated large debts.

The estate was a large employer and of vital importance to the local economy, which itself created a hierarchy, with wealthier employees buying property, and the emergence of the “shopocracy”, alongside struggling tenants and lower-paid employees.

Their combined aspirations and frustrations ensured the period of Gerald’s dukedom “represented the twilight of paternalism and deference on the Leinster estate”. The emergence of the Leinster Tenants Defence Association in 1872 and controversy about leases dented the notion of the FitzGeralds as paternalistic, and borrowing on the collateral strength of the vast estate became problematic.

The narrative of these crises shifts to perhaps the most interesting part of this book, which covers Hermione’s desperate unhappiness in her marriage to Gerald (“he uses petty tyranny”) and her abject loneliness.

She summed up her misery in a letter to her sister: “I have nothing on which to expend my energy, no object or aim in life, no great interest”. Consumed with depression, what she called “the black dogs”, she yearned for diversion, which led to an affair with Hugo Charteris, a moody, gambling, cad, who treated her appallingly.

Scandalously, Hermione gave birth to their illegitimate son, Edward, in 1892, having already had two sons, Maurice and Desmond, with Gerald, though conveniently, as was then not particularly unusual, she slipped back into the marriage, and Gerald died a year later.

Dooley acknowledges gaps in the archival record; many letters “throw up as many questions as they provide answers”, and he sometimes indulges in conjecture and pop psychology to imagine what drove Hermione. This is unnecessary, as whatever ambivalence exists is more than outweighed by the clarity of her despair and what she described as her moral blindness.

Revealingly, “in none of her letters did she make mention of her concerns for public matters or public duties”. Tuberculosis and death at the age of 30 followed.

Estate trustees were now required until Hermione’s eldest son, Maurice, reached his majority, in 1908, and the chief trustee was Gerald’s brother Lord Frederick, who left no personal papers behind but who was the last of the Kildare FitzGeralds to become a public representative, as a member of Kildare County Council.

With the Wyndham Act (1903), which facilitated state-funded transfer of estates to tenants, Frederick was also faced with the sale of the Leinster estate. Inevitably, there are also gaps in this narrative, because no estate rentals or accounts have survived, “nor is anything known about the actual decision-making process regarding the sale of the estate”. But there was great media interest in its sale for £754,000 (£73 million in today’s values), and it facilitated the ambitions of those farmers well placed to buy a new social standing.

After this the issue for the FitzGeralds, who retained the residential trappings of Carton House and its demesne, was how the capital sum from the estate’s sale could be invested to sustain a ducal lifestyle for generations. Dooley, with the assistance of the opinions of contemporary investment experts, is unimpressed that so much of the capital was invested in mortgages, but it seems dubious and unhistorical that he examines the portfolio in terms of good investment practice by today’s standards.

Dooley’s return to the private lives of the family is, however, once again fascinating, and less speculative. Maurice came of age with the ducal title but no vast estate. Profoundly affected by the loss of his mother, stricken with epilepsy and a victim of sexual abuse at school in Berkshire, he subsequently ended up in an asylum in Edinburgh following a nervous breakdown. Dooley uses a good range of sources to give an insight into his condition and the taboo around it; throughout his confinement the focus of the trustees was on finances rather than his mental health. He died in 1922.

His younger brother, Desmond, had a very different experience. Educated at Eton and then Sandhurst, he was subsequently killed during the first World War, at Ypres. Edward, however, the seventh duke, was the “polar opposite of Desmond”; there was great media interest in him, and he exploited fame for all it was worth, swindling money, signing promissory notes, facing regular bankruptcy proceedings and treating women cruelly. He was also introduced to Henry Mallaby-Deeley, “ an intrepid speculator”, who agreed to pay off his debts and pay him an allowance in return for Carton and the income from the estate.

Mallaby-Deely’s control over Carton was just as well; he was “better for Carton than an impoverished and feckless heir would have been”, and feckless Edward certainly was – or, as he wrote in 1957, when he sold his life story to the Sunday Dispatch: “My road to ruin was the gay road – the road of mad parties, reckless friends and lovely women.” That road also involved four marriages, but “ruin” was relative.

In search of an heiress, Edward went to the US in 1932, married and became bankrupt for a third time, but he continued to live on an annual allowance of £1,000 from Mallaby-Deeley. He and his wife “could afford a butler, a cook, a housemaid, a between-maid, a Lady’s maid, a chauffeur and a part time secretary”. By 1965, however, the News of the World took pleasure in highlighting that he and his fourth wife were “living on baked beans” as they “dodged the creditors”. He lived until 1976.

Mallaby-Deeley was adversely affected by the Great Depression of the 1930s. His family decided in 1948, with the agreement of the trustees and Edward’s son Gerald, to sell Carton. Given the narcissism of so many of the characters in this book, it was perhaps an inevitable end to a fascinating saga, recounted with verve in this book.