‘The fact that I’m Irish’: Eugene O’Neill, US playwright and Irish revolutionary 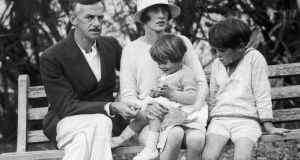 Eugene O’Neill with his wife Agnes and children Oona (left) and Shane. O’Neill’s dogged testimonials about his Irish heritage – in his diaries and letters, public proclamations and idle chatter – together lay bare the weight his Irishness had on his dramas, and thus on American theatre. Photograph: Hulton Archive/Getty Images

“The one thing that explains more than anything about me is the fact that I’m Irish,” playwright Eugene O’Neill informed his son Eugene Jr in 1946. “And, strangely enough,” he complained, “it is something that all the writers who have attempted to explain me and my work have overlooked.” O’Neill, who died in 1953 and remains the only American dramatist awarded the Nobel Prize in Literature, might be glad to know that this lapse has since been remedied.

President Michael D Higgins, an outspoken O’Neill devotee and a widely admired man of letters in his own right, agrees with the playwright’s estimation of the centrality of Irishness in his plays, especially, according to President Higgins, when it comes to his autobiographical masterwork, Long Day’s Journey Into Night.

“O’Neill’s themes,” he wrote after meeting me at Áras an Uachtaráin to discuss O’Neill’s Irish heritage, “are reflective of the great themes of both Irish and American theatre: migration and the use and abuse of memory. O’Neill belongs to both the literary canons of America and Ireland.”

(President Higgins is scheduled to address the Eugene O’Neill Society’s international conference in Galway in the summer of 2017.)

Many pre-eminent Irish writers by the early 1930s, in fact, had already claimed O’Neill as one of their own: “I was asked to be a member of the Irish Academy,” O’Neill wrote Eugene Jr in 1932 with evident delight, “being organized by Shaw & Yeats & [Lennox] Robinson, etc – and accepted. Of course, I’m ‘associate’ because not Irish born. But this I regard as an honor, whereas other Academies don’t mean much to me. Anything with Yeats, Shaw, A.E., O’Casey, [LIAM O’]Flaherty, Robinson in it is good enough for me … At any rate, I’m pleased about all this.”

Shivaun O’Casey, a director and daughter of theatrical titan Sean O’Casey, wrote of her father that “along with Shaw, Ibsen, Strindberg, Chekov and his great love, Shakespeare, he would place Eugene O’Neill”.

In 1931, O’Casey read poor reviews of O’Neill’s The Fountain in a Dublin journal that left him incensed. “Look into this man’s work closely,” O’Casey hotly retorted, “but look deeply as well, and you will find he is like unto the surge of a great orchestra, cancelling with its deep and thundering rhythms the tiny tinkle of the castanets ashake in the hands of the minor dancing dramatists.”

Joyce was noncommittal about the plays, yet conceded that the man was “thoroughly Irish”. Shaw, in the most artfully crafted left-handed compliment O’Neill ever received, called him as a “Yankee Shakespeare peopling his Isle with Calibans”.

Not long ago, on the 123rd anniversary of O’Neill’s birth in 1888, I attended the Irish American Writers and Artists festivities for their annual Eugene O’Neill Lifetime Achievement Award, a short walk from where the playwright was born in what is now Times Square. The award is conferred upon the “writer, actor, musician or other artist” who advances the stature of Irish-American culture. (That year’s recipients were Ciarán O’Reilly and Charlotte Moore, co-founders of Off-Broadway’s Irish Repertory Theatre.) At the coat check, I found myself wedged in line behind the Irish star actor and confirmed O’Neill virtuoso, Gabriel Byrne.

I asked what was next on his bucket list, now that he’d arisen as one of the playwright’s truly great male leads. Byrne responded without hesitation: “James Tyrone in Long Day’s Journey Into Night,” the character closely based on O’Neill’s father, the beloved Irish-American matinee idol James O’Neill.

Byrne is now fulfilling this long-held desire. This month in the Roundabout Theatre’s revival of Long Day’s Journey Into Night, he’ll be playing the pater familias among a superbly cast ensemble, with Jessica Lange as Mary (based on O’Neill’s morphine-addicted mother), Michael Shannon as Jamie (his ne’er-do-well older brother), and John Gallagher Jr as Edmund (the playwright himself).

“To the outer world we maintained an indomitably united front and lied and lied for each other,” O’Neill said of his tormented family, upon which the Tyrones are based. “A typical pure Irish family. The same loyalty occurs, of course, in all kinds of families, but there is, I think, among Irish still close to, or born in Ireland, a strange mixture of fight and hate and forgive, a clannish pride before the world, that is particularly our own.”

O’Neill’s dogged testimonials about his Irish heritage – in his diaries and letters, public proclamations and idle chatter – together lay bare the weight his Irishness had on his dramas, and thus on American theatre. They also reveal how such immigrant lives as his parents’, whose own parents were Famine refugees from Kilkenny and Tipperary, and my ancestors, who arrived much later, improve upon and integrate America’s cultural fabric rather than pulling it asunder.

I’ve since spent a good deal of my life in Ireland, visiting family (my sister and her husband live in Clare and run the Dolphinwatch Carrigaholt nature tour off the Loop Head Peninsula), hitchhiking, and teaching Irish literature in Sligo. It was during my months-long visits there in the 1980s and ’90s that I adopted the egalitarian impulse, the mistrust of authority, the laughter at pretension, the devotion to storytelling – traits that made their way across the Atlantic to the New World in no small part in the life and works of Eugene Gladstone O’Neill.

O’Neill never did visit Ireland, much as he longed to. But in the spirit of his fellow Irish dramatist John Millington Synge before him, he wrote about his family’s adopted motherland, the United States, as he had found her, not as she wished to be found. And he thus inspired countless members of subsequent generations, myself included, to do the same.

Once a rare neurological disease arrested O’Neill’s ability to write in the early 1940s, one of his most cherished distractions was Seán O’Faolain’s The Great O’Neill, a biography of the 16th-century Gaelic chieftain Hugh O’Neill, “The O’Neill”, Earl of Tyrone. The playwright styled his progenitor, as if describing himself, to the Irish-American novelist James T Farrell as “strong proud and noble, ignoble shameless and base, loyal and treacherous, a cunning politician, a courageous soldier, an inspiring leader – but at times so weakly neurotic he could burst openly into tears (even when sober!) and whine pitiably that no one understood him”.

One of my own favourite biographies is my relative Aodogán O’Rahilly’s Winding the Clock: O’Rahilly and the 1916 Rising. Michael O’Rahilly was my great-grandmother Eva Morris’s first cousin, and my family is as proud of our lineage to The O’Rahilly, the only officer to die fighting at the GPO, as the O’Neills had been about their line to the chieftains of Co Tyrone. (The rebel leader is still conspicuously absent in most recent summaries of the Rising, though he was immortalised in Yeats’ eponymously titled elegy, The O’Rahilly.)

The Easter Rising proved futile, as many knew it would; but the insurgence shocked the world just two months before O’Neill’s arrival, also in 1916, at Provincetown, Massachusetts, where O’Neill was discovered as a playwright and then chosen to lead another kind of revolution. The year 2016, then, signals not only the centennial of his arrival as a playwright, but of modern American drama as we know it. Once O’Neill’s plays were unleashed in New York and around the world, the groundwork was laid down for a serious American drama on a mass scale, just as one had been on April 24th, 1916, for a future Irish Republic. Though both men would ultimately triumph, O’Neill, unlike the O’Rahilly, survived to tell his tale.

Objectively, of course, there’s no equivalence between their actions when it comes to mortal danger and historic consequence. Subjectively, the kinship is there. O’Neill had never levelled firearms against his enemies, it’s true. Only a pencil, paper and the Irish urge to revolt.

Robert M Dowling’s biography Eugene O’Neill: A Life in Four Acts, from which portions of this article have been drawn, has just been released in paperback. It was a Los Angeles Times Book Prize finalist and was reviewed in The Irish Times by Joe Dowling. He will be speaking at University College Dublin on Thursday, April 28th, at 4.30pm, in the James Joyce Library, then attend the O’Rahilly family gathering in Kerry on April 30th