The drinking person’s guide to cities around the world 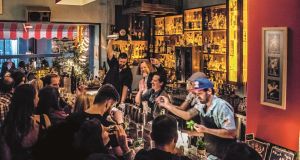 Baba Au Rum in Athens, a shrine to all things sweet and spirity

The best place to enjoy a gin adventure: Barcelona
Despite its distinct “Britishness”, gin is perhaps the spirit of Spain and in Barcelona, you’ll find everything from beautifully crafted Martinis to gin’spirational gems. Take a step back in time visiting Boadas, (boadascocktails.com) arguably the city’s oldest bar, for some classic sippin’, then head over to the aptly named Dry Martini (drymartiniorg.com) for one of Barcelona’s finest, made by the immaculately white-coated Javier de las Muelas. Finally, a visit to the beautifully styled Tandem (tandemcocktail.com) for an epic G&T will highlight why this amazing city is the perfect location for those craving a juniper-scented love affair.

The best place for time-travelling cocktails: Berlin
A city of creativity, a hot house of design, art, music, literature and flavour. Berlin is a city of contrast, colour, culture and community, but also a city of cocktails and the coolest place to be seen drinking in Europe. Start at the award-winning Buck and Breck (buckandbreck.com), which has redefined the city’s cocktail culture with innovative serves, before heading to the throwback vintage appeal of Immertreu, (bar-immertreu.de) where you can sip by candlelight (don’t even ask if there is wifi). Finally, take in the ’60s chic of Kantine Kohlmann, (kantine-kohlmann.de) which highlights that fact that you’re never quite sure what decade it is when you’re drinking in Berlin.

The best city for rooftop drinking: Marrakesh
Situated between desert and mountains, Marrakesh has it all: bustling markets, searing heat, history and incredible design. Atop all this are the wonderful roof terraces which are dotted around the city, providing respite from the heat with a well-made cocktail. The best oasis in town is at El Fenn (el-fenn.com), the funky riad which sits just inside the city walls and provides the perfect vista for a sunset drink. After dark, head to the La Mamounia hotel where the jazz notes float across the pool and into the Churchill bar, where they mix with cigar smoke and aromas of well made Old Fashioned cocktails.

The best location for quirky cocktails: Reykjavik
If there is one place on this planet that doesn’t seem like this planet, then Iceland would be that place. The landscape is straight out of a scene from Star Trek, while the locals have quirky creativity woven into their DNA. This is seen in the cocktail culture, and at Slippbarinn (slippbarinn.is) they don’t just mix up a drink using traditional bar tools, but with an adapted drill. This kooky approach is taken to another level at Loftid, (jacobsenloftid.is) where the cocktail list is written on the wall by hand. Just make sure that you leave yourself enough time to see the Northern Lights, and not just the bottom of your cocktail glass.

Fancy a culinary-influenced classic? C’est Paris!
A city that is famous for its food, the upsurge of culinary craftsmanship in cocktails has seen the classics become somewhat of a focus in Paris. Start your cocktail experience off with Bloody Maria, a Mexican twist on this classic using Tequila, courtesy of Candelaria (quixotic-projects.com), before discovering a new generation of classics at Prescription (prescriptioncocktailclub.com) where the focus is on well-crafted cocktails in a speakeasy vibe. Finally, don’t forget to seek out Little Red Door (lrdparis.com), Utterly creative with their ever-evolving menu, so there is surely a classic of the future in the making.

The best city for hidden gems? Make it Amsterdam
Just a short hop from the UK, Amsterdam is one of the most vibrant and colourful cities in Europe. The mixologists have inspiration all around, and nowhere is this seen better than in the small speakeasy of Door 74 (door-74.com), one of the city’s great hidden bars. From here, a visit to Tales & Spirits (talesandspirits.com) is a must, where they specialise in the speakeasy classic, the Old Fashioned. Still thirsty? Head to Feijoa (feijoaamsterdam.com) where the cocktail menu is a distinctly Indonesian-influenced affair for a fruity pick-me-up.

The buzz word amongst the best bartenders in Europe? Think Athens
As surprising as it sounds, the most innovative cocktail scene in Europe is currently in the home of history itself. Start out with a wonderfully wet Martini or a Metaxa Old Fashioned at the rooftop bar of A For Athens (aforathens.com) to watch the sun set. From here, head to Baba Au Rum (babaaurum.com) a shrine to all things sweet and spirity, where you’ll find an awesome selection of cocktails (and rum!) and then, when you’re in the mood for a little more experimentation, find a seat at The Clumsies (theclumsies.gr) – an awardwinning joint and certainly the bar which has got everyone in the drinks world truly hot under the collar.

Want to experience truly diverse drinking? London is the place…
I suppose we’re a little biased here, but the London drinks scene is as diverse as the city itself. If you’re planning a day trip, a distillery visit to the East London Liquor Co (eastlondonliquorcompany.com) will furnish you with botanical knowledge – and a cracking G&T. Next head over to Shoreditch and find two of our favourite basement haunts, Found (foundthebar.com) and Happiness Forgets (happinessforgets.com), before popping into Soho’s Bar Termini (bar-termini.com) for an outrageously tasty “cooked” Negroni, which throws in a little science alongside creativity. Still going strong? then head literally over the road to new bar Swift (barswift.com) and their magnificent Irish coffee, which should well and truly energise you for a night of whatever the capital still has left to throw at you…