Mrs Gaskell and Me review: A funny, heartfelt tribute to a literary giant

Nell Stevens’s book could have been grating, but succeeds through her charm and skill 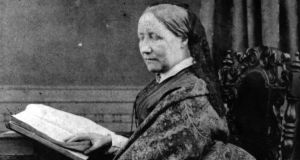 “Nature,” wrote the novelist Elizabeth Gaskell in a letter to a friend in 1854, “intended me for a gypsy-bachelor; that I am sure of. Not an old maid, for they are particular and fidgety, and tidy, and punctual – but a gypsy-bachelor.” Nell Stevens was working on an essay for a Master’s degree module on Death and the 19th-Century when she read these words in Gaskell’s collected letters. It was then, she later realised, “that my love for her crystalised, became a fixture in my life”.

Nell Stevens’s extraordinary, delightful and very moving new book offers an imagined insight into Mrs Gaskell’s world and the world of her friends, as well as tracing the tragicomic story of how Stevens herself struggled to combine academic work with maintaining a complicated relationship with a man who lived hundreds of miles away.

The narrative alternates between Stevens and Gaskell, and Gaskell’s story is told in the second person: “You hurled your biography of Charlotte into the world like a grenade, and ran away just as fast as you could.” This could have been massively grating; it’s a testimony to the charm and skill of Stevens’s writing, as well as what feels like genuine intimacy between her and her subject, that it never is.

The Charlotte in question was, of course, Gaskell’s friend Charlotte Brontë. In 1857, just before the publication of the biography, Gaskell left Manchester’s dark satanic mills for the sunny, exciting streets of Rome, where she joined a vibrant community of artists and writers and met a younger man, the American Charles Eliot Norton, who would become hugely important to her. They saw each other constantly in Rome, and remained in regular contact afterwards.

Were Gaskell and Norton in love? Stevens is sure they were, but in her brilliant 1993 biography of Gaskell, Jenny Uglow says that “it would be too strong to say that Elizabeth fell in love with Charles”, suggesting instead that her feelings for him were inextricable from her attachment to life in Rome. She also says, however, that Norton turned up every day at Gaskell’s Roman lodgings with bouquets of flowers, and for the rest of his life he kept “almost every scrap of paper she sent him”, including a scribbled note that he labelled: “This is, I think, the first note I ever received from Mrs Gaskell.” Their letters certainly suggest an intense bond.

And in the end, when reading Stevens’s book, it’s almost irrelevant whether Gaskell and Norton really did have a romantic relationship, albeit a definitely unconsummated one, or not. The Gaskell parts of Mrs Gaskell and Me don’t pretend to be a straightforward biography, nor do the parts about Stevens’s own life pretend to be straightforward memoir; there is an author’s note at the beginning saying that Stevens has “changed names, scenes, details, motivations and personalities. Every word has been filtered through the distortions of my memory, bias and efforts to tell a story.”

The facts may not all be real, but the feelings, the dynamics and above all the sense of yearning for intensity, connection and potential experience that suffuses both narratives definitely are.

Several moving chapters of the book focus on the other artistic residents of Victorian Rome; one of most poignant of these sections, which read like short stories, is the depiction of a séance organised in the city by the artist Harriet Hosmer, which asks: “Who, if given the slightest chance, the smallest hope, would not attempt to reach the people who were gone?” Stevens writes with painful, beautiful accuracy about what it is like to miss someone, whether that person has been removed by distance, by the end of a relationship, or by death.

When reading the papers of Gaskell’s friend William Story (deemed so comparatively insignificant by the authorities that, unlike those going through the archives of more popular subjects, Stevens doesn’t have to wear gloves), she realises she is examining “the detritus of a busy, thinking mind now gone . . . The people in whose company I have spent so much of the past three years? They are all dead.”

And yet Stevens’s affection for and relationship to these people is real, and very much alive. Mrs Gaskell and Me is about two very different relationships between a man and a woman. But it’s also about the eternal possibility, provided by the written word, of finding a connection with a “busy, thinking mind now gone”. At one stage, Stevens finds herself feeling “a pang, something like lovesickness, when I think that me and Mrs Gaskell can’t write to each other. We would write such good letters, I think. We would have so much to say.” In this funny, heartfelt book, she manages to say a lot.