The Contested Identities of Ulster Protestants review: grief and grievances 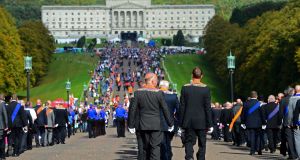 An Ulster Covenant centenary parade at Stormont in 2012: “A recurring problem for alternative voices within the Protestant community is that the very act of constructing a positive and generous worldview creates a break with the community, ” writes Robbie McVeigh. Photograph: Eric Luke

“The problem I had with this book was….” These were the words with which the late David Ervine, then leader of the Progressive Unionist Party began his contribution to a discussion on BBC television of my book, Northern Protestants – An Unsettled People, shortly after it was published in 2000. My heart sank. Ervine was a force for positive change in a community that urgently needed it. I wanted him to like the book. Then, however, he continued: “…that it was true and frightening and painful”. He went on to urge “every Protestant and every unionist” to read it. The problem I had with this book was that on page 2 I read my book described as “a deeply self flagellating tome” and a “personal exorcism of Protestant self-loathing”.

The putdown, while aggressive, is conventional. Though they are relatively young men, the chips that weigh heavily on the shoulders of Mulvenna and Burgess are ancient ones. The negativity that dismisses the questioning or critical insider as a Lundy is, in fact, explored in a compelling essay in this collection by James Greer. Lundy was the Governor of Derry who contemplated surrender during the 1689 siege, and his name is now used to denote treachery.

Greer comments that it has been the fate of unionist leaders who started out as hardliners but later embraced a measure of pluralism, to be denounced as Lundys and rejected by the electorate. Furthermore, he points out that much of what the likes of Terence O’Neill, Brian Faulkner, David Trimble and even, latterly, Ian Paisley, proposed, went on to be “quietly” accepted by those who had ousted them for it.

In his essay, Robbie McVeigh comments that “a recurring problem for alternative voices within the Protestant community is that the very act of constructing a positive and generous worldview creates a break with the community”. McVeigh argues that there are “cultural resources” available to enable young Protestants to look outwards and that they “desperately need a better offer than the current impoverished diet of Ulster Scots, a flag and militaristic, sacrificial and imperial accounts of the First World War.”

The book gets off to a weak start with an essay by Eoghan Harris. It is all about Harris and his vital part in everything. Malachi O’Doherty’s account of running media training workshops for loyalists is deft and honest. Yes, such training assists with evasion, he admits, but while others are skilled at defending themselves, “little is served by one faction being conspicuously inept”.

The Rev Brian Kennaway takes a scathing look at “Orangefest” and the “increasing dysfunction” of the Orange Order’s relationship with the media. However, as Kennaway has been arguing passionately since the debacle of Drumcree in the 1990s, the problem for the order is, in fact, that it has lost touch with reality as well as its roots. “A ‘Mardi Gras’ is not the answer to the protection of cultural identity… there is a foundation within Protestant culture beyond which it cannot go and without which it loses its raison d’etre… the authority of Scripture.” Orangefest, meant to be a renewal, “has become a byword for violence and lawbreaking”.

John Wilson and Alister McReynolds almost lost me with an overly long introduction agonising over what to call the Protestants who emigrated from Northern Ireland from 1718 onwards. Was it Scotch-Irish or Protestant-Irish or Scots-Irish or Irish Presbyterians or Ulster Scots? The authors ultimately conclude that “many Americans of Ulster descent…are simply Americans.” Indeed, they suggest that “if one finds an American who is unaware of or uninterested in anything but their American roots you have probably, paradoxically, found a Scots-Irish person.” The essay gets really interesting in its discussion of why this should be so, but frustratingly runs out of space.

Graham Reid’s memoir, haunted by the suicide of his father, is rich and poignant. The final essay is by Billy Hutchinson, who became the leader of the Progressive Unionist Party in 2011. Defensive and full of denial, the piece is inadvertently revealing about why the party is no longer progressive.

The editors are conventional too in terms of gender – there is only one essay by writers who are women. Fidelma Ashe and Caireen McCluskey employ “a radical constructionist framework to explore the complex processes through which PUL gendered identities are constituted, disciplined and transgressed”. (PUL is a newish term favoured in this book – it stands for Protestant Unionist Loyalist). Compared with women from the Irish nationalist/republican community, “activities that challenged or troubled normative gender roles were less visible and appear to have been more circumscribed in the PUL community.” Ashe and McCluskey quote Eileen Evason’s assertion that women in Northern Ireland lived, during the conflict, in “an armed patriarchy” and note that some women got involved in cross-community challenges to gender inequalities.

Some contributions to this collection suffer from that “festering sense of grievance” which the poet Tom Paulin has identified as lying at the heart of loyalism. However, there is much that is interesting and new. And the cover photograph, a statue of Queen Victoria with an Orange sash obscuring her eyes, is brilliant. Now, if you’ll excuse me, I’ll just get back to beating myself up.

Susan McKay is the author of Northern Protestants – An Unsettled People and Bear in Mind These Dead, among other books