The Brutal House: A vibrant novel that releases its energy in vital bursts 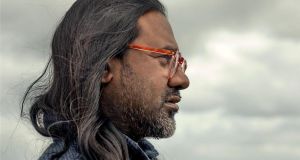 Niven Govinden’s fifth novel, begins with an act of protest. Gathered on the steps of New York’s City Hall.

This Brutal House, Niven Govinden’s fifth novel, begins with an act of protest. Gathered on the steps of New York’s City Hall, five drag Mothers (the heads of five drag families) sit in a silent, textless protest. The Mothers, who act as the guardians and stewards of a queer community, offering both love and accommodation, have come to pray. Their children have been going missing, and no-one is taking notice. These drag families, “drawn together by the air of absence that framed us”, are fierce, and have learnt how to channel their anger.

This vibrant novel is, among other things, about the many ways in which the force of that anger becomes emancipatory. In a time of greater mainstream visibility for drag culture - not only through RuPaul’s Drag Race, but through series such as Pose (currently airing on the BBC), live performance, and literature (think of Joseph Cassara’s House of Impossible Beauties) - Govinden’s gift is to explore the complex and disruptive modes of queerness.

1 When Covid subsided, Israel reopened its schools. It didn’t go well
2 Pubs in Ireland may need to reopen county-by-county, says WHO’s Mike Ryan
3 Social worker overcomes poverty to graduate with master’s degree
4 Covid-19: Cabinet looks to tighten travel restrictions and decide on pubs reopening
5 Seamus Mallon: I saw John Hume’s raw courage as he faced bloodthirsty Paras
6 ‘I’ve had my butt kicked for the past three years’: Jamie Oliver on fame and failure
7 John Hume: ‘He was our own Martin Luther King’
8 Q&A: Pubs, travel and weddings, the decisions Cabinet will make today
9 Five Covid-19 clusters found among Irish fruit and vegetable growers
10 More than 40% of help-to-buy recipients already had deposit
11 Fintan O’Toole: Supreme Court has called time on government waffle
12 Vicky Phelan: Postnatal depression made me hate being a mother
13 Ethics watchdog backs staff called ‘lazy’ by FF’s Marc MacSharry
14 How safe is it to go back to the office?
15 Rage against the dimming of the light: Campaigners fight to stop LED lighthouses
16 John Hume’s family ask people to ‘light a candle for peace’
17 Cholesterol-lowering drugs may not have much benefit, review finds
18 Weather warnings bring little cheer for holidaymakers and farmers
19 Gerry Thornley: Irish system to face its acid test in front-loaded return
20 David Trimble: After the big dinner in Oslo, somebody said why don’t we party together?
21 Manchester United alter Europa League squad as Rashford makes Vogue cover
22 Fine Gael Senator is threatened with violence on social media following canvassing post
23 Dún Laoghaire home of renowned acting mentor Betty Ann Norton for €1.5m
24 Netflix: 10 of the best new shows and films to watch in August
25 Coronavirus experience shows how Greece’s weakness is its sunshine
26 Most workers now expect choice to work from home part-time
27 Shelbourne statues row a missed chance to debate decolonisation of public heritage
28 John Hume obituary: Nationalist leader who championed ‘agreed Ireland’
29 Why are there so many angry dads?
30 24 hours in Bundoran: ‘The town is mental. No one expected it to be so busy’
31 Uefa alter penalty law for goalkeepers coming off their line
32 Firefighters battle blaze on diesel tanker on Cork-Waterford road
33 56 financial firms entered or expanded Irish operations in 2020
34 Tesla wants an electric Golf rival
35 Mass test general population to avoid another lockdown in UK, says Blair
36 Italian indulgence in a coffee, cream and cocoa dessert
37 DUP’s Brexit ads: Who bankrolled the secretive £435,000 campaign?
38 Owner of Dundrum Town Centre to sell prized assets
39 Tributes to John Hume flood in from Irish and international politicians
40 Coronavirus: Warning against blame game as 46 more cases are confirmed
Real news has value SUBSCRIBE