Brontës grew up an immigrant family with their father’s Irish accent. Charlotte married an Irishman but Anne’s work is most influenced by a feeling of being foreign 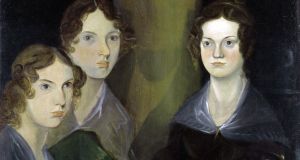 One of the oddest reactions to Sally Wainwright’s recent (brilliant) TV drama about the Brontës, To Walk Invisible, was an objection to the Yorkshire accents. Some fans had imagined the literary sisters speaking RP. I wonder what they’d have said if Wainwright had focused more on the Brontës’ childhood, when Charlotte, Branwell, Emily and Anne still had Irish accents, inherited from their father. They lost them when they went to school. Yet they never lost a sense of being outsiders, of never quite fitting in.

Both their parents were strangers to Yorkshire. Their mother came from Cornwall, as did the aunt who came to help look after them after their mother died. But it was their father Patrick who really felt foreign. He had come a very long way from the mud cabin in Drumballyroney, Co Down where he had grown up in a large and very poor family, the son of a farmhand, fence-fixer and road-builder called Hugh Brunty. Their diet of porridge, potatoes, buttermilk and bread gave Patrick a lifetime of indigestion. They owned four books, and two were the Bible. At 12, Patrick went to work for a blacksmith.

Three years later, after a local priest found him reading to himself in a country lane – Paradise Lost, doing the voices – Patrick’s life started to change. He was given an education. Within a year, he was a teacher himself. Inside a book, he wrote his name over and over, varying the spelling from Brunty to Pruty to Prunty; he was becoming someone else, and he didn’t know yet who that person would be. Astonishingly, he got himself to Cambridge, then ordained, and then to Yorkshire, to be the perpetual curate at the moorland village of Haworth.

Patrick’s job for life, and his solid stone house didn’t stop him feeling like “a stranger in a strange land”. He was never allowed to forget he was an immigrant – and his children were constantly reminded of it too. This was, after all, an era in which the Irish were always being characterised as childish, lazy, primitive, dirty and alcoholic – in 1850, the novelist Charles Kingsley disgustedly called them “human chimpanzees”.

Patrick’s daughter Charlotte always tried to downplay her Irish roots. Her first biographer Elizabeth Gaskell reinforced this, claiming to find “no trace” of an Irish accent in Patrick’s voice, that his face was “all Greek lines” and that he didn’t keep in contact with his family (in fact, he did). She wrote that “His strong, passionate, Irish nature was, in general, compressed down with resolute stoicism”, as if it was a virtue to try to be something you are not.

Gaskell doesn’t have much to say about the racism Patrick and his family faced, about the time when Patrick was shouted down at election hustings in Haworth, and 20-year-old Branwell tried to intervene. Later the villagers burned Branwell in effigy, a potato in one hand and a herring in the other. When Branwell started drinking, they snidely said he was reverting to type. And when Patrick was prescribed eye drops that smelled of alcohol, the gossip was so vicious that he had to carry a doctor’s letter everywhere he went, to prove the haters wrong. The Brontës had only to open the papers to encounter hysteria about refugees escaping the Famine and arriving in Liverpool. They were pictured, stick-thin and desperate, dressed in rags, with shocks of unkempt hair – images that may have inspired Emily to create her anti-hero Heathcliff. But of the three sisters I think it was Anne who was most influenced by her father, and particularly by his sense of feeling foreign.

In her debut novel, Agnes Grey, Anne describes her governess heroine arriving at her first job, far from home, like a “thistle seed borne on the wind to some strange nook of uncongenial soil, where it must lie long enough before it can take root and germinate, extracting nourishment from what appears alien to its nature, if indeed it ever can”. Agnes doesn’t take root. Instead, from the margins, she mercilessly scrutinises her callous, entitled employers.

The heroine of Anne’s second novel, The Tenant of Wildfell Hall, is also an outsider. Helen arrives in a Yorkshire village wearing black and trailing mystery. Her neighbours joke that she might be a witch, and use her as a warning to their daughters not to “try to be different”. Helen is a fugitive, who has broken the law by leaving her husband. He was abusive, not just to her but to her young son, but in Victorian England, she would never have got a divorce, let alone custody of their child, so she has to flee in the night.

This story was inspired by Patrick’s advice to a woman who came to ask him what to do about her violent alcoholic husband. As a clergyman, he might have been expected to tell her to stay, to talk about abstinence, to talk about forgiveness. But he told her to leave, even though it was illegal, even though society might shun her. Because Patrick had never been accepted himself, he cared less about society and convention than about moral courage. Anne saw him baptise illegitimate children when many ministers wouldn’t. She saw him oppose capital punishment, work tirelessly for the poor, and even call for revolution against pernicious legislation, urging people to “obey God rather than man”. When Anne met the woman he had tried to help, she made Patrick’s startling advice the engine of her most radical novel.

The Tenant of Wildfell Hall was published in 1848 and became an instant bestseller. When critics called it coarse and unwomanly, Anne hit back with a preface that argued that women could write as boldly as men, and that it was not wrong to try to save people on the page. Within weeks of writing the preface, she lost her brother, then Emily, and then found she also had TB. If she had not died in 1849, at just 29, she might have pursued a more political agenda off the page too, connecting with women who were campaigning for women’s rights, and against domestic violence.

She might also have visited Ireland. Only Charlotte managed that, spending her honeymoon (with an Irish curate) in Banagher, in Co Offaly. While she arrived feeling ambivalent both about Ireland and about her new husband, she decided, after seeing him “in his own country”, that she had made the right choice.

Take Courage: Anne Brontë and the Art of Life by Samantha Ellis is out on January 12th from Chatto & Windus, along with new editions of Anne Brontë’s Agnes Grey and The Tenant of Wildfell Hall, from Vintage Classics