Podcast of Joseph O’Connor in conversation will be recorded in front of a live audience in association with the Irish Writers Centre, Parnell Square, on September 2nd 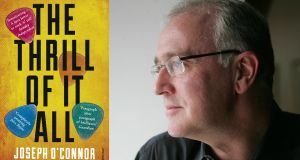 Joseph O’Connor’s The Thrill of it All uses layered narrative textures with both serious skill and engaging lightness so that the core drama emerges with clarity and wit,” wrote Colm Tóibín in the Observer’s Books of the Year, 2014

The Thrill of it All by Joseph O’Connor is the new Irish Times Book Club choice.

At college in 1980s Luton, Robbie Goulding, an Irish-born teenager, meets elusive Fran Mulvey, an orphaned Vietnamese refugee. Together they form a band. Joined by cellist Sarah-Thérèse Sherlock and her twin brother Seán on drums, The Ships in the Night set out to chase fame. But the story of this makeshift family is haunted by ghosts from the past.

Spanning 25 years, The Thrill of it All rewinds and fast-forwards through an evocative soundtrack of struggle and laughter. Infused with blues, ska, classic showtunes, New Wave and punk, using interviews, lyrics, memoirs and diaries, the tale stretches from suburban England to Manhattan’s East Village, from Thatcher-era London to the Hollywood Bowl, from the meadows of the Glastonbury festival to a wintry Long Island, culminating in a Dublin evening in July 2012, a night that changes everything. A story of loyalties, friendship, the call of the muse, and the beguiling shimmer of teenage dreams, it is a warm-hearted, funny and moving novel for anyone that’s ever loved a song.

Reviewing the novel in The Irish Times, fellow author Peter Murphy wrote: “Stylewise the new book signals O’Connor’s return to the fizzy tone of his journalism and early novels, incorporating diary entries, interviews, reviews and memos. It is as if, having transformed himself into a heavyweight novelist by dint of the scholarly graft required to produce work on the scale of Star of the Sea or Redemption Falls (or the underrated chamber piece Ghost Light), he now fancies a bit of fun, swapping the high style of those period epics for a talky first-person narrative. It is pure pop fiction, as if the boys (and they are predominantly boys) from Q or Mojo took to channelling Nick Hornby or Tony Parsons. Except The Thrill of It All is a darker tale than it first appears.”

“Joseph O’Connor’s The Thrill of it All uses layered narrative textures with both serious skill and engaging lightness so that the core drama emerges with clarity and wit.” (Colm Tóibín, Observer, Books of the Year, 2014)

“Occasionally, you read a sentence that you know couldn’t be bettered: Joseph O’Connor’s new novel is jam-packed with such sentences – paragraph after paragraph of brilliance” (Guardian)

“O’Connor at his playful and narrative best… shot through with electricity, packed with sentences that send you spinning, full of joy and sadness and swerve. This was a book to make my tired heart soar. Of all the Irish writers working today, Joe O’Connor speaks better than anyone of what is genuine, what is necessary, and what is ennobling. A thrill indeed.” (Colum McCann, winner of the US National Book Award and the Impac Award)

“[O’Connor] is warm without being sentimental, and he cuts effortlessly between comedy and tragedy. Music nerds will love the most satisfyingly voluminous playlists since High Fidelity” (Kate Saunders, The Times)

“A novel about music, family and friendship...O’Connor brilliantly evokes the 1980s... This novel is shot through with humour, patois and all the human contradictions that make the characters truly memorable.” (Mail on Sunday)

O’Connor is the author of eight novels: Cowboys and Indians (shortlisted for the Whitbread Prize), Desperadoes, The Salesman, Inishowen, Star of the Sea, Redemption Falls, Ghost Light and The Thrill of it All, as well as two collections of short stories, True Believers and Where Have You Been?, and a number of bestselling works of non-fiction. He has also written radio diaries, film scripts and stageplays including the award-winning Red Roses and Petrol and an acclaimed adaptation of Daphne du Maurier’s novel My Cousin Rachel.

Join us over the next few weeks as the author contributes a range of articles, which shed light on his influences and inspiration. Other writers will also be contributing and readers are invited to comment or send in their questions to bookclub@irishtimes.com which the author will endeavour to answer.

The series will culminate with a podcast of Joseph O’Connor in conversation with Martin Doyle, Anna Carey and Sorcha Hamilton, which will be pre-recorded in front of a live audience in association with the Irish Writers Centre, Parnell Square, on Wednesday, September 2nd, at 7.30pm. The recording will be followed by a Q&A and there wilbe live music. Admission €5, €3 concessions, to include a glass of wine. http://irishwriterscentre.ie/