Streets Like These: Lucy Caldwell on Van Morrison’s influence

Van Morrison’s music is woven deep into the fabric of my childhood. But even more than these clusters of memories, his music seems the very soul of my childhood places 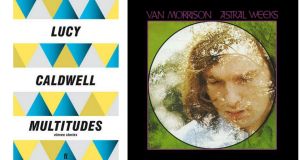 Lucy Caldwell: Van Morrison was just 23 when he wrote and recorded Astral Weeks. I took a full decade more, and then some, before having anywhere near the skill and technique to write truthfully about my own East Belfast childhood. I don’t claim for a second that one is akin to the other. But the music of Van Morrison in general, and Astral Weeks in particular, is something of a guiding spirit to my stories 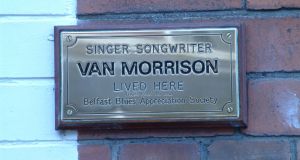 Orangefield, Hyndford Street, Abetta Parade, Cyprus Avenue, North Road, the Sandy Row and the Connswater River, “walks up Cherryvalley from North Road Bridge railway line”: it often feels I came to know my own streets through the music of Van Morrison before I knew them myself 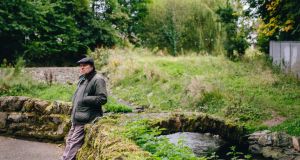 Van Morrison in 2014 in the Hollow, where the Knock and Loop rivers join to form the Beechie river, properly known as the Connswater river, in east Belfast. Photograph: Exile Productions

I’m likely remembering not one particular journey. On summer weekends, or special occasions, or most excitingly of all, if my Dad was test-driving a new car, we would drive out of Belfast along the coastal roads of the Ards Peninsula; and in the car Van Morrison would be playing. Sometimes the Chieftains, or Leonard Cohen, but I remember most of all the music of Van Morrison, a double cassette-tape of Hymns to the Silence, as my sisters and I day-dreamed and drowsed against each other in the back seat, cosy and warm and lulled by the car and the music.

In the strange way that memory works, this has come to be talismanic to me: deeper and truer and somehow more meaningful than anything that might have actually happened. A transfiguration of the mundane, a momentary glimpse into something beyond; a sense of something I can’t quite articulate, but have come back to time and again in my fiction.

Van Morrison’s music is woven deep into the fabric of my childhood. My Mum dancing in the kitchen to Moondance. My Grandma’s favourite hymn, Be Thou My Vision. Brown Eyed Girl playing as I walked back up the aisle after getting married. A magical trip I made with my Mum, just before I was pregnant with my son, on an unexpectedly sunny autumn day, retracing Coney Island…

But even more than these clusters of personal memories, his music seems the very soul of my childhood places.

Orangefield, Hyndford Street, Abetta Parade, Cyprus Avenue, North Road, the Sandy Row and the Connswater River, “walks up Cherryvalley from North Road Bridge railway line”: it often feels I came to know my own streets through the music of Van Morrison before I knew them myself.

The city I lived in was not the city I saw on the news, the one that family friends in England refused to visit, the one about which German penpals begged for lurid details. And besides, you don’t always pay attention. You walk every day from Cabin Hill Park down the slope of the King’s Road to Cherryvalley and King’s Square (the clinic, the post office, the newsagent, the bakery); you take a bus to the Sandy Row to buy new shoes for school; Connswater is the big new shopping centre. And then one day, for no reason at all, your Mum takes a detour back from the Ormeau Embankment down Hyndford Street, through Orangefield, along Cyprus Avenue, and tells you that these are the places in the songs. I remember suddenly paying attention. I remember asking to go back to those streets, those places, and looking at the street-signs. These places weren’t just places any more: they were something more-than, something sacred.

I still get that frisson when I hear Duke Special singing, in a Belfast accent, “I got soul by the Connswater River…” (Some Things Make Your Soul Feel Clean) or come across a poem such as Ballyhackamore by the underappreciated Roy McFadden:

There is magic in the precision of “Paddy Lambe’s and its sawdust”, of “Smart’s Butchery with its sawdust”, of “the church with the iron bell”, of “the shop on the corner / of Earlswood Road”. I wrote myself and my city into Multitudes, in a way I have never written before, and writing the people and the places opened a trapdoor to more memories, specific memories of particular places at particular times, which I hadn’t realised I’d lost, or meant so much to me. Van Morrison understands this, and it is in his music that I first had intimations of it: the power of naming, the power of litany. Indeed, not being from a church-going family, he was my first introduction to the power of litany: of repetition, and through repetition the transformation of the mundane into something else, something greater.

Eamonn Hughes says in his introduction to Lit Up Inside, the selected lyrics published by Faber in 2014, that: “From his earliest writing, back streets can turn into mystic avenues”. That sense occurs again and again in Van Morrison’s lyrics, the hope and the fleeting possibility of transformation, transfiguration.

Any significant writer creates their own world, Hughes goes on to say. Though Belfast may begin as a real place, it is ultimately more important as a site of the imagination. As such, it is not confined to the actual city of that name but is instead a terrain that can expand and contract as creative needs dictate.

My Belfast, my East Belfast, even, is not that of Van Morrison’s, not entirely. But mine wouldn’t exist without his. My previous novels have taken epigraphs and even titles from the poetry of Louis MacNeice – my first from a line in Selva Oscura, my second from Meeting Point, my third from London Rain. But with Multitudes, my hymn to being young and growing up in Belfast, story after story suffused with yearning, shot through with the intensity of longing, with uncertainties about belonging, the dream of a place where you might more truly belong, it had to be Astral Weeks.

Those plaintive, shimmering lines towards the end of Astral Weeks played over and over in my head as I was writing, as I was not-writing, as I was walking the streets, as I was pushing a buggy and rocking a baby and watering the plants in terracotta pots on my little balcony and all of the thousands of other, banal and quotidian things I did in the two, three years as the collection was finally coming together.

Astral Weeks is a young person’s album. That’s not to say I don’t hope to appreciate it in a decade, two, three decades’ time, and who knows, perhaps in more, and deeper, ways – but it captures, for me more than any other record, the intensity of growing up, the pain and the momentary joy and most of all the almost unbearable longing. Van Morrison was just 23 when he wrote and recorded it. I took a full decade more, and then some, before having anywhere near the skill and technique to write truthfully about my own East Belfast childhood.

Multitudes by Lucy Caldwell (Faber, £12.99) is this month’s Irish Times Book Club selection, which we shall be exploring in a series of articles and essays. The series will culminate in an interview by Laura Slattery, which will released as a podcast on September 30th