Slip of a Fish review: An impressive portrait of motherhood, loss and mental fragility 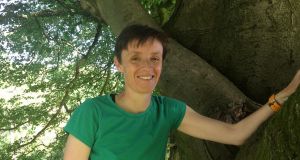 Amy Arnold: her novel is a portrait of motherhood, loss and mental fragility

Book Title:
Slip of a Fish

The independent publisher And Other Stories, based in the north of England, decided to publish only female authors in 2018, prompted by a talk the author Kamila Shamsie gave at the Hay Festival some years previously on redressing gender imbalance in the book world.

Heralded as the only publisher to take up Shamsie’s call to arms (though Irish readers might point to Tramp Press’ recent catalogue), its 10 books this year are all by female authors.

Whether you come down on the Lionel Shriver side of things (“rubbish”) or think that such a response is a worthy effort to reset an age-old problem, And Other Stories says the initiative has given it a chance to publish new authors, with only one of the 10 previously published by the imprint.

Known for its translated fiction in particular, titles this year have ranged from a rediscovered classic of the Argentine writer Norah Lange to the upcoming UK debut of Dominican writer Rita Indiana.

In addition to these new novels in translation, the publisher ran a competition for writers based in northern England, which was won by Amy Arnold’s Slip of a Fish. An impressive effort for a first timer – this is the Cumbrian writer’s first published piece of fiction – the novel is a portrait of motherhood, loss and mental fragility told by a narrator that is increasingly unable to communicate with those around her.

There are echoes of Eimear McBride’s A Girl is a Half-Formed Thing in the verbal and mental breakdown, and in the glimpses of past trauma, though Arnold’s prose is much less intricate. It becomes an issue as the narrative continues down a route of fragmented interior thought where the stylistic use of repetition needs either stronger imagery or more depth to sustain interest. Initially beguiling, the narrator Ash’s voice gets lost within itself and leaves little space for the reader to accompany her into oblivion.

References that seem important in early chapters, inviting readers into the story, become vague and disjointed. What has happened with Papa, with yoga teacher and former lover Kate, with Ash’s relationship to her child Charlie, even with the Second Core watch her husband Abbott wears? These are questions that perhaps don’t need to be answered but their drifting to nothing gives an unsatisfactory feel to the narrative as a whole.

There is much to recommend in the debut however, not least Arnold’s ode to language. She is a writer preoccupied with the inadequacies of the spoken word in relating personal trauma. Ash has a rich interior life, which becomes increasingly vivid and fantastical as she withdraws from the world around her. A sense of mystery is evoked from the outset: “I spoke a lot in those days. I was always speaking.”

It is hard to reconcile this idea of Ash with the current reality – a woman unable to engage with her husband or child, even to perform everyday tasks. The difficulty of life for the family comes through in small, carefully chosen details: Charlie’s unwashed hair is noticed at school; other mothers take care of the little girl in the evenings; busybody neighbours drop over with unsolicited offers of help and insults masked as advice.

The use of repetition throughout the book – “The flowers had shot up. They’d shot up, the flowers” – gives a trancelike state to proceedings

Recent novels from emerging writers that focus on fractured families and mental illness in similarly inventive fashion include How Saints Die by Carmen Marcus and Claire Fuller’s Our Endless Numbered Days. As with the latter, Arnold’s book asks what happens when words cannot be trusted. In Slip, the damaged Ash takes a literal approach to the question. As her controlling husband continually urges her to rest, her only recourse is to pick apart his words and sentences: “Why would he say new beginning when all beginnings are new?”

Ash is envious of others who can speak, like school mother Lynn, who may or may not be having an affair with Abbott: “The ease of it, I mean. I mean, the way the words slipped out one after the other. She was so used to words. She was bent over, she was doing something inside the car and the words were slipping out, one after the other.”

Exacting in her interior monologue, Ash is far less sure of what she witnesses in the wider world: “I was standing right there and he had her breasts and his hand in our letter box and he couldn’t have it all, but he did.”

The use of repetition throughout the book – “The flowers had shot up. They’d shot up, the flowers” – gives a trancelike state to proceedings as Ash goes deeper into herself. Mixed with flashbacks of intimate moments with ex-lover Kate and playful scenes with Charlie, her present isolation is glaring and sympathetic. Arnold has written an absorbing, sometimes frustrating debut of a woman obsessed with linguistics because she can’t find the words to express herself: “Vulnerable can have three syllables or four, depending on who’s saying it.”