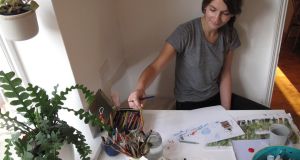 Do you think you know London? Hester White, who narrates Laura Carlin’s debut novel, confronts us first with this question. Hester did once, or thought she did. Raised in a parsonage in the Lincolnshire Wolds, she would listen raptly when her father returned from his travels, imagining a wonderland of “wherries and steamers”, where one might “take a seat on Shillibeer’s omnibus…stopping at The Unicorn for beefsteak with oyster sauce”.

But Hester’s father, by the time we encounter her, is long dead, and her childish illusions have been abandoned. Orphaned at 11, and lacking better prospects, she has been taken in by the family of his former gardener. Consigned to insalubrious lodgings among the backstreets of Bethnal Green, Hester now counts “foglers, lifters and murderers” among her neighbours. Her London, she assures us, “isn’t the one Papa visited, or the one you might think you know”.

The year is 1831, and the streets Hester has come to know are lightless and filthy, teeming with thieves and vagrants. With its chipper rogues and multifarious squalor, it is, perhaps, a rather more familiar milieu than Hester seems to think, but it is brought to life with such grimy vitality that it seems a shame to leave it behind. But for our heroine, understandably, it has few attractions. Her Uncle Jacob is a drunkard and a lecherous pig, her Aunt Meg a figure of dubious charity. The urchins of the locality, meanwhile, have been disappearing with unsettling frequency. Entrusted one morning with the household’s last shilling, Hester seizes her chance.

Her escape hinges on the vaguest of plans, and gets off to an inauspicious start when she falls under the wheels of a carriage. Its occupant proves to be an imperious young physician named Calder Brock, who scoops her up without a word and deposits her at his Westminster townhouse. There she is fussed over by servants while her injuries are tended to, and if she is suitably awed by her good fortune, she is also understandably curious. Just who is this Mr Brock, and why has she been so richly favoured?

His explanation is reassuring, if mildly improbable. Mr Brock, it transpires, is a member of the much-feared London Society for the Suppression of Mendicity, but favours enlightened methods and means to demonstrate to his colleagues “that even those from the gutter can be educated”. Hester plays along – she was educated by her father, but knows when she is on to a good thing – and is promptly whisked off to Waterford Hall, family seat of the Brocks, there to convalesce in the country air while undergoing an improving course of instruction.

All, needless to say, is not quite as it seems. There are dark mutterings among the servants, and Hester has misgivings of her own. A young scullery maid has joined the ranks of the missing, while Rebekah Brock, her benefactor’s sister, is said to show an excessive fondness for certain of her ladies’ maids.

But it is the enigmatic Rebekah, Hester soon learns, who is to tutor her in the ways of gentility. Hester proves an apt pupil, and the two soon establish a hesitant rapport. Intimations of a deeper attraction grow, but a misunderstanding intervenes before any declarations can be made. The obligatory reversal of fortune follows, and by the time Hester returns to London, sunk in dejection and beset by deepening mysteries, all the trappings of a satisfying melodrama have been assembled.

And this, to be clear, is no bad thing. After all, Wilkie Collins fashioned some of the most glittering entertainments of the 19th century from these very materials. But before Wilkie Collins, there was the penny dreadful, and it is to the tawdry pleasures of that genre that Carlin’s tale – with its unmistakable echoes of popular novels like The Mysteries of London – pays its most overt homage. The results are splendidly diverting, for the most part, but as in all such exercises, there is the looming danger of pastiche. While a degree of staginess goes with the territory, Carlin is inclined to trowel on the period mannerisms (no one hurries, in this novel, when they can “make haste”), and to couch the most ordinary passages in such an excess of descriptive upholstery that the reader feels threatened at times with suffocation. In one scene of domestic contentment, “the repast is plated” while “the fire is obediently giving off heat”, which is not only cloying but faintly perplexing. By dint of sheer exuberance, though, this spirited and highly readable debut makes such excesses seem forgivable, leaving us a little bloated, in the end, but certainly not unsatisfied.