Seamus Heaney’s hearth language: The words the poet grew up with in Co Derry 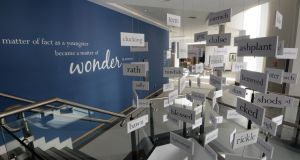 The point about dialect or hearth language is its complete propriety to the speaker and his or her voice and place. What justifies it and gives it original juice and joy is intimacy and inevitability. I’ve always confined myself to words I myself could have heard spoken, words I’d be able to use with familiarity in certain companies.
Seamus Heaney, Stepping Stones, page 129

Language, the medium used by the writer, is a living thing; it changes over time. Each year words in common usage are added to dictionaries. With the rapid progress in science and technology in the past 20 years, many of these additions have their origin in these subjects. Of course sometimes is merely an added layer of meaning to an already existing word, such as the word mouse.

Concurrently, words are lost to language. Words die from lack of use. Words thrive when they are part of everyday vocabulary, spoken and written.

In many of his writings Seamus Heaney uses hearth language or dialect. His phrase hearth language is apposite. It is the language we learn and use at first within the family and then as our horizons widen, within the local community. In these places we are secure, at home and understood.

We are using dialect, regional linguistic variation, variations of pronunciation, vocabulary or grammar of the language used by a particular group in a community or country. Dialect gives a sense of rootedness, of access to a specific culture, a notion of belonging, a stand against the idea of a state having a monolingual identity.

Since it is common to one particular community or class there may be a feeling of social and cultural inclusion for those speaking a particular dialect and, conversely, of exclusion in those who are not familiar with it. So, to fully engage with a piece of writing it is better not to feel excluded, by gaining some idea of what dialect words might mean.

This glossary concerns itself with a small area of the north of Ireland, a region where people speak English, an English enriched by dialect words having their roots in Irish and Scots Gaelic, Lowland Scots, Anglo Saxon and Elizabethan English. For centuries these words were in common use, but I have found that this aspect of language is changing.

I am almost of an age, come from the same region and have the same background as Seamus Heaney. The words he uses are familiar to me, were used in my childhood home and the community in which I grew.

But in my work as facilitator for reminiscence groups, and in schools and adult groups for creative writing I have come to the realisation that understanding of our local dialect has diminished, and in some cases, disappeared.

This is due to many things. Globalisation promotes levelling of language This is reinforced by access to technologies – television, social media, computers – which use language with a vocabulary created to be understood by people wherever they might live. It is also a result of decisions made about what vocabulary we need to function in the modern world.

The Lost Words, by Robert MacFarlane, is a book which responds to the withdrawal from dictionaries of words concerning the natural world. In his introduction MacFarlane says, “Once upon a time words began to vanish from the language of children. They disappeared so quietly that at first almost no one noticed – fading away like water on stone.”

I feel that is exactly is what is happening with our local dialect, the vocabulary used by Seamus Heaney. While reading his poetry with groups of local children and young adults, it is clear that these words are no longer hearth language. And if people from Seamus Heaney’s own home place are having difficulty understanding some of his words, how much more difficult it must be for those for whom English is not a first language or who do not share his cultural and linguistic background.

While elucidation, and it is hoped to at least some extent, preservation of dialect was the initial impetus for this glossary, other considerations were taken into account. Society, farming, expectations have changed a great deal in the generations that have passed since Seamus Heaney first published his work. So some of the customs he mentions, ways of family life and of working, have been given longer explanation to clarify them.

This glossary has been written in the hope that it will help readers of Seamus Heaney’s poetry and plays, that the explanations will enrich their reading and that it helps preserve his hearth language.

fother Local pronunciation of fodder, the hay given to cattle in the winter months

gully knife A large sharp kitchen knife; originally the knife used to kill a pig, by cutting its gullet

haggard A sheltered spot near the farmyard where stacks of hay were kept during the winter. It made it more convenient for the farmer getting fodder for the livestock, which overwintered inside. Stacks of corn could be kept there too, waiting to be threshed.

hirpling Limping; walking with difficulty; hobbling; to move in a manner suggesting a painful affliction.

jamb-wall A wall built in the hallway of a house. It did not extend the full length of the hall, but left an opening into the kitchen. It was built mainly to prevent those in the kitchen suffering from draughts from the outside door. Some jamb walls had a little window in them.

From Aftergrass to Yellow Boots: A Glossary of Seamus Heaney’s Hearth Language is published by Colmcille Press