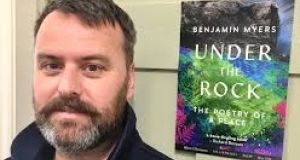 Under the Rock: The Poetry of Place

In Under the Rock, Benjamin Myers, the novelist perhaps best known for The Gallows Pole (2017), a darkly brutal story set in 18th-century Yorkshire, returns to the windswept landscape of the Calder Valley, turning his hand this time to nonfiction. Set mainly in a 10-acre wooded site beneath the looming crag of Scout Rock, above Mytholmroyd (the home of the poet Ted Hughes), Under the Rock is a hybrid piece, combining notes on archaeology, geology, film, literature, and ecology to create an atmospheric exploration of the landscape and its history. At times, Myers’s talent for a certain sort of MR James-style English noir creeps into this work in a way that feels uncomfortable – he describes Saddleworth Moor, with its dark history, as “cursed”, a state he also assigns to another plot which “no locals would consider entering” because “they deem [it] cursed down the centuries”. Nonfiction, in this case, makes something ghoulish of his propensity for creating an atmosphere. Elsewhere, however, poetry, photography and field-notes intersperse the narrative to great effect. A compelling creative exploration of a place and its past. Seán Hewitt

The Physics of Everyday Things

The book is set over a day and features an imaginary interlocutor called “You”, who does various things such as having toast for breakfast, driving to a clinic to have an X-ray on a sore ankle, going on a business trip on a plane and so on. This provides the framework for Kakalios to explain the physics behind much everyday technology that we depend on such as a toaster, an electronic toothbrush, GPS navigation, credit cards, ATMs, X-rays and MRI scans, metal detectors and airplanes. Basic scientific concepts such as the principle of the conservation of energy and the creation of electro-magnetic power explain how a huge array of devices work. Certainly the dominant role of physics in our technology-dependent lives comes across clearly but it’s doubtful if the book achieves its ultimate objective (to makes physics more easily understood) because it’s not written in layman’s language. It reads like a manual, employing dry, technical terms, with its far too few illustrations looking like they were drawn by hand. Brian Maye

The Lost Soul of Eamonn Magee

Having read countless boxing books, many provide a useful list of acronyms for the various official bodies that govern the sport. This book is probably the first one I’ve read that includes acronyms for Irish republican groups and loyalists in Northern Ireland. This information is at the beginning of this book, setting the tone of Eamonn Magee’s biography from the first bell. It’s a rough and ready ride, and Paul D Gibson does a good job in not flinching from the story. It’s unlikely to change your preconceptions of Magee after reading it, but then that’s unlikely to bother the Belfast boxer. Carl Frampton in his cover blurb compares Magee to Johnny Tapia, which is a decent shout for anyone who knows the career of the American boxer. Tapia is dead several years now though, whereas Magee, perhaps surprisingly to himself if and when he thinks about it, is still around to tell his tale. After reading it, one can only hope he finds some peace and contentment in life now. NJ McGarrigle

“What do you do next, after you’ve changed the world?” The tagline of Lissa Evans’s wonderful new novel is a question many Irish women are asking ourselves right now. It’s also the challenge facing Mattie Simpkin, the charismatic ex-suffragette at the heart of Old Baggage. It’s 1928, universal suffrage is finally being introduced in Britain after 10 years of partial voting rights for women, and Mattie needs a new outlet for her considerable energies. When she encounters an old comrade who has embraced fascism and founded an Empire Youth League, Mattie decides to put together a counter-organisation, the free-thinking, adventurous Amazons. It’s a decision that will ultimately disrupt not just Mattie’s life but also the lives of her friend Florrie and Ida, a working-class Amazon whose membership of the group sends her life in an unexpected direction. Perfectly paced, emotionally engaging, beautifully written and often very funny, this is an enormously satisfying book populated by memorable, sometimes infuriating characters whose complicated relationships with each other always feel utterly convincing. Evans’s next book can’t come soon enough. Anna Carey

A Place For Us

This is a book of firsts – it is both the writer’s very accomplished debut novel as well as the first story published by Sarah Jessica Parker’s imprint at Hogarth. Yet the story it tells is not new. In fact, it is sometimes painful how relatable it can be. Exploring familiar themes such as love, identity, spirituality, shame and desire, these are even more fraught as Mirza’s Indian-American family is straddling two very different cultures. Opening on the evening of the eldest daughter Hadia’s wedding, the event is more importantly the family’s reunion with estranged son Amar. Telling the story via multiple perspectives, the author paints an incredibly textured and compassionate portrait of the characters’ lives. Their love for one another is undeniable, yet their inability to communicate it is devastating. As they collectively and individually struggle with the expectations of their heritage as well as contemporary life, A Place For Us is a timeless, yet also timely, family epic. Aisling O’Leary

Story of a Marriage

At what stage in a marriage does power become passion, or passion become power? Jon and his wife have been married for 20 years and their relationship originated with dishonesty and hurt. Jon’s habit of viewing his wife through a gaze results in a narrative suffused with sexual control and an obsession which teeters toward unhealthy expectation. Jon loves the idea of his wife; his ownership of her love and affection; his role as her husband: “I lived as though my life only took place before her eyes.”

Translated from Norwegian by Deborah Dawkin, this novel is a masterful collection of words. Jon subtly controls the story and attempts to narrate his wife’s thoughts. Their marriage becomes consumed by his overwhelming desire to manipulate his wife into becoming a malleable partner he can enter and inhabit. Jon’s approach to love and affection is both desperate and confused. Gulliksen has created a work of fiction which is forceful, effective and pathetically poignant. A sensual and significant novel, deserved of attention. Margaret Madden