Recalling the Celtic Tiger: Insightful overview of the excitement and excess 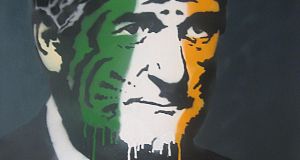 The so-called Celtic Tiger was a dramatic period in Irish history when a troubled and economically backward country suddenly seemed to have discovered Aladdin’s lamp and all its wishes came true. It was liberating, exhilarating, self-delusional and ultimately disastrous and we are still living with its dodgy legacy. It left us with a morning-after hangover of €206 billion of public debt – or, if it sounds more cheerful, €42,500 for every person in the State. Its equal and opposite reaction – the years of austerity in which we were supposed to purge our sins by self-flagellation – damaged many lives. Yet it is also strangely veiled in amnesia. It hovers over us like a haze of embarrassment – that mad binge when we made a show of ourselves and that we prefer not to remember in too much detail.

It is not too much of an exaggeration to say that the Celtic Tiger itself was a problem of epistemology – it was about the ways in which a society could fail to know itself. Even the name is problematic. There was nothing Celtic about the long boom in the Irish economy that lasted from 1994 to 2007. And it was not a Tiger economy. The term properly refers to the south-east Asian model of rapid growth that centred on state-led industrialisation. The State was certainly a huge force in what happened in Ireland (for both good and ill) but the boom was largely driven by foreign direct investment by US-based transnational corporations.

1 Taoiseach claims Sinn Féin not ‘a normal political party’
2 Who are Ireland’s 17 billionaires?
3 52 places to go in 2020: Here’s where the New York Times says you should visit
4 Yacht captain guilty of drunk sailing had ‘God given right’ to be on Liffey
5 Over 65s are expected to ‘crawl into corner and die’, says election hopeful Valerie Cox
6 My father in a nursing home wants to gift me his house
7 Man who killed Jastine Valdez shrugged before being shot by gardaí, inquest told
8 Man shot at in taxi claims bail conditions made him ‘sitting duck’
9 Revealed: Ireland’s favourite takeaway and favourite takeaway dish
10 Rob Delaney: ‘As my career took off, my son got sick...then he died’
11 Irish Times poll: Health and housing are most important issues for voters
12 M50 tolls payment case against Keane Mulready-Woods withdrawn
13 Proposed rules for Trump impeachment trial outrage Democrats
14 State subsidises public sector retirees to cover gap until State pension
15 Find out if your local TD is a landlord or owns multiple properties
16 Are there annual limits on inheritances or gifts to a child?
17 Mother (93) has right of residence upheld despite judgment against son
18 Ipsos MRBI poll: Fianna Fáil edges ahead of FG as SF surges
19 Rape trial finishes following death of the accused
20 Fintan O'Toole: Safety-first politics has had its day
21 Gardaí suspect botched murder attempt was bid to avenge Mulready-Woods death
22 War of Independence discovery reveals IRA spy network
23 Fianna Fáil will be happy, Sinn Féin thrilled but keep an eye on the Greens
24 Election 2020 fact check: Have consultant waiting lists increased by 140,000?
25 Buried for 50 years: Britain’s shameful role in the Biafran war
26 Gay man awarded €27,000 for harassment over his sexual orientation
27 Netflix: The best 101 films to watch right now
28 Patrick Stewart returns to Starfleet: ‘It’s inconceivable to me that I should retire’
29 Murder accused told gardaí he cut up woman’s body to make her lighter
30 Dublin City Council throws out Iveagh Markets application
31 Gardaí investigating Keane Mulready-Woods murder arrest man
32 Seven reasons to watch Paris Hilton’s new cooking show
33 Election 2020: Strong economy not enough for voters who want hard signs of prosperity
34 Gerry Thornley: Saracens very late to apologise for repeated cheating
35 Dr Eva’s Great Escape is everything Dermot Bannon’s recent show was not
36 First US case of coronavirus confirmed as Chinese officials race to stem spread
37 Swiss police suspect Davos plumbers of being Russian spies
38 More than 23,000 people apply to be Great Blasket caretakers
39 What to say to someone who has cancer
40 Conor McGregor hails Donald Trump as ‘USA goat’
Real news has value SUBSCRIBE