Ramallah: a city under siege seen through the eyes of its writers

To many writers, Ramallah is an ideal, a mirage, a glimmer of hope that isn’t real 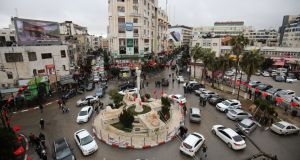 Some cities are built from scratch, on empty land. Some seem to have always been there, deriving their importance from their unique location. While others exist only in the imagination, the stuff of legends and tales handed down by grandmothers. Ramallah is not like any of these; a seemingly modest city with a short and relatively peaceful history, it is a city of ordinary stories, rather than heroic myths. To its many, regular visitors, it’s a relaxing place to spend a summer vacation; to its residents, it’s just home.

And yet, with its unassuming nature and convenient geography – sprawling along a ridge of the Samarian Hills, nearly 3,000ft above sea level – Ramallah has managed to take its place as a pivotal city in modern Palestinian life. To historians from afar, this might seem like an accident, but it’s an accident that a lot of thought and planning has gone into.

Ramallah is host to several important government ministries, not least the Mukata’a compound, the Palestinian Legislative Council Building and the headquarters of the Palestinian Security Services in the West Bank. This means that Ramallah is the political centre of modern Palestine – a kind of de facto, if unrecognised, capital.

The only thing that casts this status in doubt is the historical and political status of Al-Quds among Palestinians. Perhaps because of this uncertainty, Palestinians in general have an ambivalent relationship with this city, which acquired its pivotal status only after the Oslo Accords, in the so-called Oslo Years (1993-2000). This ambivalence to Ramallah and its status is part and parcel of Palestinians’ ambivalence to the Oslo Accords themselves, which created a short-term peace (of sorts), and allowed for some self-government, but led to no long-term plan, or any restoration of the kind of free movement enjoyed by Palestinians before the first intifada.

To many writers, Ramallah is an ideal, a dream, a promise. Many expatriates returned to the city in the 1990s, in the wave of optimism generated by Oslo, having spent decades in exile, longing to return to at least part of their homeland. Their expectations on returning were sky-high, and were only shattered by the reality they found in the on-going occupation.

In his novel I Saw Ramallah, the poet Mourid Barghouti experiences this moment, looking at the gun being carried by the IDF soldier at the crossing: “His gun took from us the land of the poem and left us with the poem of the land. In his hand he holds earth, and in our hands we hold a mirage.” Ramallah represents this mirage, this glimmer of hope that isn’t real, to many writers.

This is Ramallah for you: a horizontal city – ranged along the contours of a hilltop ridge, where so much is new – surrounded by much more vertical cities, whose topography tips over the sides of steep, vertiginous valleys, or gathers around mountain tops, cities deep with history.

It is a city of contrasts, with a sophisticated cafe culture and modern restaurants as well as working-class falafel shops and markets. A city of businessmen and NGO staffers, modern companies and haphazard buildings that almost obliterate the historic limestone houses hidden among them, with their ancient, subtle architecture whose original families have since been lost to the diaspora. It is a city with three refugee camps in its centre: Al-Am’ari, Al-Jalazon and Qalandia. A city of deprivation and neglect, not to mention continuous raids, demolitions and arrests by the IDF.

The stories gathered for this anthology highlight the contradictions that make up Ramallah – a modern city but an occupied city; a home but also somewhere to escape. Roads feature prominently in many stories, including the time of the Second Intifada (2000-2005) when the official routes between Ramallah and the neighbouring towns were blocked or too dangerous, necessitating unusual modes of transport for hundreds of commuters – like donkeys to traverse the dirt tracks and circuitous mountain routes – who would arrive at their workplaces in ministries and corporate offices splattered with mud.

This was a profoundly traumatic time for all Palestinians, which saw the invasion of Ramallah and a two-year long siege of Palestinian Authority President and PLO leader Yasser Arafat in his Mukata’a compound and curfews that could last for over two months. This era is the setting of Ibrahim Nasrallah and Khaled Hourani’s stories – a time when love and death competed for the heart of the city.

In Ibrahim Nasrallah’s historically accurate, but seemingly implausible Love in Ramallah, we read about love stories blossoming in very different places: on the road from Nablus to Ramallah and in the city itself; always outside, never indoors. We read of the man who is forced by Israeli soldiers to kiss a girl he doesn’t know so their packed bus can pass through a checkpoint, and of the man who blows a kiss to his wife through the window as military jeeps invade their neighbourhood to make an arrest.

In Anas Abu Rahma’s tale, the protagonist is a villager who yearns to see the sea, in a city very far from it, and to be loved by a city girl before strange nightmares overcome him. Ziad Khadash’s story, Get Out of my House, tells of a man who comes home to find a strange woman in his house who is adamant that it’s her house and that he has to leave before her husband returns. Here we glimpse the ephemeral life of the refugee, returning from his home in the camp, leaving his library behind to be ruined by soldiers going through his stuff, and living alone in a city he doesn’t belong where he has to continually prove his identity or his innocence.

Liana Badr’s story A Garden that Drinks Only from the Sky goes to the roots of life in Ramallah and the unique experience of being occupied. Here we see the Ramallah that has its land expropriated for the construction of Israeli settlements that now surround it on all sides. In this story, we meet Najaah living in her house on the western reaches of the city, making all her food at home from the bounty of the small plot of land that she lives off, along with her mother: Labnah, cheese, apricots, olives and home-baked bread. When the rain stops falling on her tiny paradise, she travels to the Ibrahimi Mosque in Al-Khalil to pray to Allah for the rain to return and there she finds love for the first time.

The tales of independence, personal identity and individuality in this collection mirror the allowances Ramallah makes for your life. It is a city that allows you to think freely, unlike many other Palestinian cities. But it also questions absolute freedom from the outset by asking about the limitations on freedom and what is acceptable, what is original and what is incidental, what is real and what is as Barghouti says, a mirage.

It brings us to the bigger and much more intractable question (as Palestinians we are obsessed with the big questions): what kind of a Palestine do we want as a people and as individuals – as artists, writers, blacksmiths, carpenters, politicians, business owners, prisoners, the lost and the found? A Palestine in our image, far from the vision others want for us to embody?

Ramallah is a city that is being suffocated by settlements and checkpoints from all sides, yet is filled with a desire to open up and advance. It is a city with an ability to adapt and blend in, to take on the forms around it, and it has enough hustle and bustle to let you disappear in it and feel like you have all the freedom in the world. And yet it can deprive you of this freedom as quickly as you turn a corner, all the while convincing you that it has a point.

Maya Abu Al-Hayat is the editor of The Book of Ramallah, translated by Mohammed Ghalayini and published by Comma Press on March 4th