A columnist who gives herself wholeheartedly, without inhibition, to her readers 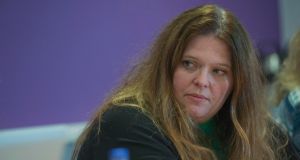 There are people – men mostly; the kind of men who are still deep in mourning for the passing of the bedsit – who take a loud and self-indulgent pleasure in hating every word penned by female columnists.

They are offended on a visceral level by the notion of people with ovaries getting paid to write about things that only people with ovaries could possibly be interested in. Life, for example. Relationships. Families. Abortion. Religion. Grief. Homelessness. Human rights. Rape. Nonsense stuff like that.

Meanwhile, these individuals treat newspaper reports on games played by grown men chasing balls around grassy rectangles with the gravity of a dispatch straight from Aleppo. Irony is apparently not a concept with which they’re well acquainted.

Anyway, to these individuals, Róisín Ingle represents the apogee of everything that’s wrong with Irish society, and they occasionally write and tell her so.

To the rest of us, she encapsulates, if not everything that’s good about Irish society, then many of its better qualities. Humour, usually of the self-deprecating kind. Warmth. Empathy. Low-level chaos. Insightfulness. Quiet strength. An ability to formulate a view on literally any topic. An appreciation for batons of deep-fried potato.

Here’s where I declare an interest. Please look away now, men-in-the-bijou-one-beds-formerly-known-as-bedsits, because not only am I a fan, I consider Róisín a friend.

Technically, though it pains me a little to write this, we’re not actually friends in any conventional sense of the word. We have shared a regular email correspondence over the years that I was a columnist for this paper, and she was my editor. But we’ve only actually met a few times in person. When we do, we always seem to bypass the small talk and get straight into the big stuff.

So really, I have no right to consider her a friend. It is presumptuous in the extreme. But I do. And if you’re a regular reader of her columns, you may consider her a kind of friend too. Because it’s impossible to read her every week and not develop a sense of connection with her.

While Róisín writes insightfully and often with an unexpected perspective about issues relevant to the whole of society – Ann Lovett, the Graham Dwyer trial, the Berkeley tragedy – it is when it comes to her personal life that she may be at her best.

She gives herself wholeheartedly, joyfully, hilariously, sometimes tearfully, and almost always without inhibition, to her readers. She writes about her mother, and her mother-in-law-in-waiting, the inimitable Queenie (who has, by all accounts, acquired a substantial fanbase of her own).

She writes about the ups and downs of love and her relationship with the vest-ironing, foot-massaging, Liverpool-loving Portadown fella, with whom a proportion of women in Ireland must be a tiny bit besotted.

She writes about grief and loss: in one of the most poignant and deeply personal pieces here she writes about the experience of not having had a father since she was eight.

Her readers cheered her on a few years ago when she decided to stay blissfully childfree, and then again a short while later when she became pregnant. We were with her for the scan which revealed not one heartbeat, but two. We were there the time she accidentally ordered a doll’s house-sized bathmat and the time she accidentally went to a wedding to which she wasn’t invited.

But it’s not true to say that she is entirely without inhibition. Because like most columnists who plunder their own lives for material, there are corners of it she keeps private. Until this book came out, there was one subject in particular about which she had never written. An Experience, as she puts it, which is shared by about 12 Irish women every day. An Experience that is so commonplace you could argue that it’s an ordinary part of modern life, and yet so taboo that many women who go through it tell absolutely no one. In that sense, it is, you could argue, a quintessentially Irish Experience. She went to England to have an abortion.

She never wrote about it before for the most understandable, human reason: she didn’t want people to think less of her. She changed her mind, she reveals in the introduction, not for a single reason but for 100,000 reasons: every Irish woman who has had to travel for an abortion.

And for two more reasons in particular. “If my daughters ever come to me and say they are pregnant when they don’t want to be, I don’t want them to have to get a boat or a train or a plane,” she writes.

The response since she wrote those words has, she revealed in a recent column, been overwhelming – not in the sense of the many mailbags full of Basildon Bond paper with nasty words scrawled in green ink she was expecting, but overwhelmingly supportive. Her readers wanted her to know that, whatever their own views on abortion, they understand.

And that seems particularly appropriate because Róisín’s great gift as a columnist isn’t, I realised as I read this volume, her wit or her relentless curiosity or her acute observational skills or her distinctive voice or her ability to take an unexpected view on an issue of the day, though she has all those in spades.

Her greatest gift is that she gets it. She understands. She feels it. She is capable of having her heart broken by a little girl in French plaits who is crushed when her father shouts at her in the chipper to stop singing. Or by a 20-year-old business student who writes to her about grief from Berkeley.

Jennifer O’Connell is a former Irish Times columnist who now works in Silicon Valley Public Displays of Emotion is available at irishtimes.com/irishtimesbooks for €14.99 (including postage within the Republic) and in bookshops