Dennis O’Driscoll’s poems are preoccupied by mortality and a sense of alienation, while Frank Ormsby’s poems are a mordant miscellany with a confident voice 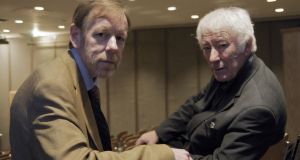 In Rainer Maria Rilke’s great essay On Dolls, the poet remembers the alienating discovery that the doll, no matter how much attention is lavished on it, must remain its own inert thing, separate from whatever we project onto it. For Rilke this marks a rupture, an example of how human consciousness, try as it might, is never at home in this world we live and die in. Such a sense of alienation and rupture, of wrong beginnings, is evident on almost every page of Dennis O’Driscoll’s Collected Poems (Carcanet, £19.99).

In the book’s first poems O’Driscoll writes about his parents’ early deaths, which orphaned the poet and his siblings: “looking forward becomes looking back / until there is nothing either way but death”, he writes in Siblings, a poem which also established O’Driscoll’s characteristically unsettling and matter-of-fact tone: “We have spent a year without him – his thoughts / scattered, his burden of organs eased.”

His shocking double bereavement skews O’Driscoll’s perspective as a poet: wherever he would look, in his three decades’ work, death is in the offing. Striking individual successes include the darkly gothic relish of poems like Someone (“Someone is dressing up for death today, a change of skirt or tie / eating a final slice of buttered sliced pan, tea”) and the account of his own conception, Job (addressing his parents, he asks, “Could they not have turned over / or taken more care?).

Preoccupied with mortality, the poems appear bewildered by good health and pleasure. O’Driscoll defuses Romantic idealism about life on Earth, offering instead a jaundiced, omniscient, sometimes bitterly Beckettian reflection on being “born astride a grave”. Indeed, there is a caustic revision of one of Beckett’s most-quoted lines in Or Bust: “Quote that witty quip you heard at Rotary: . . . something . . . something . . . fail again better”, while in Spare Us, he writes: “Spare us the spring” and “And spare us, no less, the need / for wonder”.

O’Driscoll’s distaste for “wonder” in response to the bare facts of life was, perhaps, fortified by his working life as a lawyer and civil servant: the fine detail and jargon of legal instruments and management provided him with a vocabulary which was at least one remove from Ireland’s lyric tradition. Like his contemporaries in the civil service, Thomas McCarthy and Gerard Fanning among them, there is close attention to the world of work and its rhythms, especially in The Bottom Line, which explores, over 550 lines, the workplace’s cramping, unsatisfying rituals: “You will slave till pension day, / eluded by advancement, satisfaction, wealth. / In your head, some plangent melody repeats”. Later long poems are broader and more scrapbook-like: in Skywriting, Dear Life, Time Pieces, Before and Breviary, the absence of god, like the absent parents of the earlier poems, is the condition and prevailing weather in which the poems are composed.

O’Driscoll’s insistent anti-lyricism was grounded in his extensive reading of his contemporaries, and his refusal of the many cliches he found there. His critical aesthetic circumscribes his work, and, reading 500-plus pages, a reader will question his cussed use of awkwardly literal idioms, never quite “exiting from / spreadsheets, flagging tomorrow’s / priorities on your electronic diary” (Museum).

His voice, though, is one of the most distinctive of his generation, a generation to which his work stands at a critical angle. His contemporaries are, too, the explicit subject of satires that judiciously target “say anything” pomposity: The Next Poem consists entirely of a preamble which concludes with: “As I said, it’s quite short. And you have to picture it set out on the page as five sonnet-length trapezoids. Here’s the poem.” At which point O’Driscoll’s poem ends.

War Poet also targets writerly vanity: “His will be the war poem to end all war poems. A sure-fire competition winner.”

Such satirical bullseyes would surely appeal to Frank Ormsby, one-time editor of The Honest Ulsterman, whose The Darkness of Snow (Bloodaxe, £9.95) is sometimes as mordant as O’Driscoll’s work. Ormsby is good company, confident about his audiences and the voice he brings to them. In My Father Again, the poet is visited by a ghost who hopes “this time / I’ll produce a real poem / The Ballad of Paddy Ormsby”, but must leave, unsatisfied: “So again you plunge into the unshaping night. / I slip the latch. Already you are out of sight.”

There are poems here for his Belfast friends, Ciaran Carson and Michael Longley, engaging poems about a Fermanagh boyhood, and a sequence responding to paintings with character sketches, although it is difficult to see what exactly Ormsby adds to the paintings other than introducing a space for him to write about women.

Two other, very different sequences round out a book whose miscellaneous nature does not serve its best work as well as it should. The Willow Forest imagines the post-war trial of a tyrant, seen through the eyes of an interpreter, whose own, self-reflexive testimony is the sequence’s most compelling: “I think of the places where the truth was lost: / in the corner of a bar where six men met - / or was it five? [. . . .] As one Professor of Politics dared to remark, / ‘We’re all revisionists now and shall be again.’”

And Ormsby is at is best in The Parkinson’s Poems, which maintains a level calm even as it is quite clear about the disease (“My party piece is called / The Plane in the Storm”), the medication, the side-effects and the accompanying hallucinations:

with a taste for line dancing

At times they exude

a kind of homelessness,

crashing at my pad.

They have the fearsome

Whatever it is they are waiting for,

they will wait forever.

John McAuliffe’s fourth book is The Way In (Gallery). He teaches poetry at the University of Manchester’s Centre for New Writing