Eileen Battersby: Belarusian author is a witness with a profound grasp of humanity 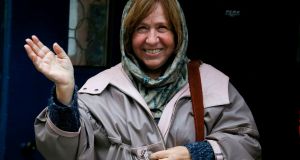 Svetlana Alexievich the 2015 Nobel literature winner, waves after a news conference in Minsk, Belarus, yesterday. The judges described her work “a monument to suffering and courage.” Photograph: Sergei Grits/AP Photo

It takes courage to see the truth; it takes even more to confront it, describe it and present it against the odds. This year’s Nobel Prize for Literature has been won, unusually, by the favourite, Belarus writer and journalist Svetlana Alexievich (67), a truth-teller of rare tenacity and human insight. Her win is a cause of celebration and a reminder that great writing can also be based in the real.

“Reality is the thing that I have lived by and with,” she has said. For her as a non-fiction writer shaping narratives of witness, reality must be made real. She is the 14th female literature laureate of the 107 writers honoured to date.

Born in Belarus – close to the birthplace of another gifted master of reportage, Ryszard Kapuscinski, author of Imperium (1994), a book charting experiences Alexievich understands as part of her past – she is a career journalist who has based her approach on the study of emotions created by and defined through the events of history.

An earlier book, War’s Unwomanly Face (1988), in which she interviewed women soldiers who had served in the second World War, is yet to be translated. She also dared to tell the truth about the 1979 Soviet invasion, and subsequent occupation, of Afghanistan in a work that was widely criticised by the Soviet authorities.

It was Alexievich who defied the Russian and US governments to alert the world not only to what happened on that April day in Chernobyl in 1986, but to report on the ongoing and horrific legacy of a nuclear explosion, as both governments preferred to downplay the tragedy and only acknowledged the immediate death toll, although its long-term effects are comparable to that inflicted on Hiroshima in 1945.

Many of the dead at Chernobyl died instantly in the initial explosion at the reactor; for others dying was slower and continued for years after the international journalists had moved on elsewhere. In the process of researching her magnificent account, Voices from Chernobyl, Alexievich sustained a 10-year vigil, despite being cautioned about the dangers. She interviewed more than 500 people, hearing stories of grief, helplessness, fatalistic resignation and anger, many undercut by Russian humour at its blackest.

Above all, she engaged with a human tragedy. She calls herself a reporter, and is a very fine reporter and oral historian, but she is also a witness with a profound grasp of humanity.

According to her US publisher, John O’Brien of Dalkey Archive Press, who spoke to The Irish Times from Chicago soon after the announcement: “Alexievich is exactly what this prize is supposed to be about – truth, morality and the courage to go against the accepted view. She is also a very good writer. I felt she would win; she had been a frontrunner before and it’s funny I’d been saying that she would win, but when I got a message from Europe early this morning, 6am my time, telling me ‘you’d better reprint the book’, I stopped for a moment and wondered ‘now what’s all this about?’ But then I knew and well . . .” Her win has attracted widespread interest in the US.

O’Brien’s bemused reaction was well matched by that of Alexievich, who didn’t at first understand the phone call from Stockholm. When she did grasp the meaning, her response was a universally understood “fantastic”. Ana Perez, of Hispa in Madrid, publisher of outstanding fiction from Spain, was equally delighted yesterday when she contacted me to say that Alexievich was a great writer. Before setting up Hispa, Perez had worked as an editor for a Spanish publisher specialising in writing by women from Eastern Europe.

“It was 2008 and although I didn’t meet her, I worked on this powerful, raw narrative, a book of voices, and couldn’t believe how I had not been as aware as I should have been of what had happened in Chernobyl. It was part of a series called Voices from the East.” Perez referred to it as “a book one never forgets”. It is true: the images are devastating because Alexievich spoke to survivors who had entered a living hell; she watched how radiation poisoning physically dismantled affected human beings as they told her their stories, and their families could only watch.

At the time she began working on the Chernobyl she was pregnant, but concealed the fact, instead saying that she already had two children. “Firemen and helpers were sent in to the initial disaster area,”says John O’Brien, a pioneering champion of both fiction and non-fiction in translation, “and later, other workers were ordered in to clean up and they knew they were going to their deaths, enticed by a car their family needed or for pathetic amounts of money for their loved ones. It is a shocking story.”

He recalled having first come to hear about Alexievich by chance. “I was speaking to the publisher of Glas, a small Russian literary journal at the London Book Fair. Like all small magazines and presses, she had no money and she was asking me about grants. She gave me a copy of the latest issue; that would have been about 2002. I began reading an Alexievich article and was really impressed by the writing, especially the tone – the anger and the irony.”

In the following year, 2003, he acquired the rights to Voices from Chernobyl, but first commissioned the writer Keith Gessen to do a new translation. Voices from Chernobyl won the 2005 National Book Critics Circle Award in the US. For O’Brien, who also publishes Norwegian Jon Fosse, another Nobel contender, Alexievich’s win is about literature and also the importance of translated writing.

She is a small, sturdy woman with a kindly face and a sense of humour. Her empathy has proved vital: people respond to her. Alexievich possesses a belief in justice and has devoted her vision towards chronicling the Soviet, and particularly the post- Soviet, experience. Her view of history is based on the individual; the personal emotions and communal suffering that plot the story of a country, her country. Winning the Nobel literature prize means she can listen to further stories and place the individual centre stage in a world increasingly under threat.

Many observers – me included – suspected that the Hungarian master László Krasznahorkai, whose works include Satantango (1985) and most recently Seiobo There Below (2008) would win, and no doubt in time he will. But this year belongs to the courageous Belarusian whose theme is the ordinary person at the mercy of the greater evils of our world.