No longer forgotten: women activists from the decade of centenaries

As we develop a critical mass of gender-focused material, no one can say women were not involved in every aspect of Ireland’s revolutionary past 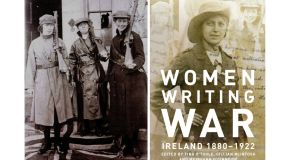 Women writers, academics and activists have all worked to ensure the inclusion of women in the Decade of Commemorations. There was official acknowledgment that gender parity had to be an underlying principle informing commemorative events. There is a hunger to know more and, thankfully, a new generation of researchers, building on the foundations of scholarship that started in the 1970s, who are deploying their skills, often using innovative methodologies, to uncover previously unknown material. From the evidence, not only were women there, but their conception of revolution was all-encompassing, full of generosity and compassion.

Olivia O’Leary, commenting on the conference in Lissadell this May, entitled Ireland’s Women – revolution and remembrance, declared that the experience was for her “listening to history with the gaps filled in”. The focus then was on Countess Markievicz, but from the Land Wars, the Boer Wars, the Cultural Revival to the Easter Rising and subsequent War of Independence, Irish women have been involved in key events in a large variety of ways. They questioned institutions and conventions and worked to make a better world. As we develop what is becoming a “critical mass” of gender-focused material, no one can say that women were not involved in every aspect of Ireland’s revolutionary past.

Moving away from the silos of individual disciplines, such as history and literature, helps to shed new light on the familiar, in addition to unearthing new material and new heroines. Women activists in the late nineteenth and early twentieth centuries had many identities: radicals, revolutionaries, queer activists, carers, as well as women who remained attached to the domestic sphere, to mention only a few possibilities. What they had in common is that all sought to make a difference to the society in which they lived. In a period when the humanities have struggled for resources within the academy, it is refreshing to realise how much of value can be gleaned from intelligent, ideologically aware analysis of literary sources.

In using little known or completely unknown texts, it is possible to bring to light many unjustly forgotten women who lived through those turbulent times, as well as having new light shed on the familiar. Anna Parnell, inspirational figure in the Ladies’ Land League of the 1880s, fighting for tenant farmers’ rights, was the epitome of the New Woman, yet who knew that she was also regarded as akin to Marianne, symbol of the French Revolution? Such was her portrayal in a wide variety of British local and national newspapers, a rich mine of information overlooked when we concentrate on evidence from Irish sources.

There has been, rightly, public furore at the realisation that Ireland’s national theatre, founded and funded by women, was excluding women playwrights in its celebration of the centenary of the Irish State – but few people know that Winifred Letts, one of the few women to have a play produced by the Abbey Theatre, also used her experience of nursing war-wounded in England during 1915-1916 to write poems that reflected her understanding of conflict through the wounded bodies she encountered. Her sympathetic poem Deserter challenges the heroic image of war and her exploration of themes of grief and loss deserve to be widely circulated and discussed, particularly in these months of Somme remembrance.

While we have had some focus on the Ulster life of Roger Casement, little is known about his female friends, many of whom lived in the Glens of Antrim and were important influencers and supporters. Margaret Dobbs, Ada McNeill and Rose Young were three women from Protestant Ascendancy backgrounds who rejected the beliefs of their childhood to the extent that one of them, Dobbs, became an executive member of Cumann na mBan, teaching Irish and funding scholarships to the Gaeltacht, her home in the Glens gathering kindred souls in the way that Francis Joseph Biggar gathered nationalists in his Belfast home. This largely hidden story of activism included involvement in the Gaelic League, which brought together Protestant and Catholic, women and men, and those from different social classes. Frustratingly, few of the women’s letters to Casement survive, although we have his replies from which to piece together some of the experiences of those times. What exists reveals the New Woman of the Glens, whose ideas and perceptions of social justice owe much to their friendship with Casement, and the wider world in which he moved and shared with them.

Agnes O’Farrelly, one of the first female lecturers in University College Dublin, is often criticised for her speech at the inaugural meeting of Cumann na mBan because of her conservative emphasis on women’s role as an extension of her domestic role. There was, however, much more to her as a public figure. She was the first woman to publish a collection of Irish-language poetry, and this deserves greater attention. She also joined the campaign against the 1937 Constitution because of its reactionary clauses relating to the role of women in the home. Those of us who have been severe in our criticisms of historical figures for their failings are justly admonished when we see evidence hinting at greater complexities.

Eva Gore-Booth, commonly contrasted with her sister, Constance Markievicz, as a pacifist who rejected the actions of the republican combatants, is revealed in her writings to have been a much more ambiguous figure. The intensification of martial imagery and rhetoric in her poetry and prose after the Rising indicates a reaction that was much more sympathetic than often realised. Like Hanna Sheehy Skeffington, she distinguished between violence in imperial and colonial contexts. Gore-Booth is one of the best known of Irish queer writers, considering weakness and strength, male and female, war and peace not as oppositional binaries but processes to be negotiated. There is, therefore, far less of a contrast to her sister than is commonly perceived. This re-reading adds another dimension to the endless debate regarding the morality and outcome of the Easter Rising.

It would be a fitting outcome of this period of commemoration if Peggy Mitchell’s work was republished. Mitchell, who wrote under the pseudonym Garrett O’Driscoll, was a young woman who wrote short stories and a prize-winning novel while also working actively as a member of Cumann na mBan. Her writing combined war experiences with love plots, and while she later married a friend of Liam Mellows, the evidence is that she might have at one time been romantically involved with Mellows. It seems clear that this young generation of revolutionaries were radical in their personal lives as well as in their politics. Lodging in Harry Boland’s house and involved in all sorts of dangerous missions, she captured this in a fiction that provides us with a permanent reminder of women’s role in the national movement. Why do we not know of her importance in the literary canon of Irish political struggle?

While women activists did not write directly about sexual relations, astute attention to the small details of their witness statements, now available online from the Bureau of Military History, reveals much about how the body was viewed, particularly in the pressures and forced intimacies of war conditions. Women dressing wounds find themselves shielded from the reality of the male body and women imprisoned after the Rising write of their efforts to create some female space in supporting each other while incarcerated in a male zone dominated by British soldiers totally unprepared for the reality of women combatants. Of course, we know that these kinds of small victories were fleeting and temporary, as the early promise of 1916 faded and the forces of reaction gained dominance. With republicans marginalised by the new Irish State and women relegated to the home, those kinds of conversations, borne out of a belief that a new era of equality was on the horizon, gradually were silenced.

The role played by women in the foundation of the Irish State will, one hopes, continue to be a feature of our Decade of Commemorations. The disciplines of history, literature and cultural studies can play a huge role in broadening our knowledge and transforming perceptions. Feminist scholarship has a key role to play in helping to reshape our understanding of the past as we continue to work towards gender equality on both sides of the Irish border.

Dr Margaret Ward is a feminist historian and is currently Visiting Fellow in History at Queen’s University of Belfast. This article is adapted from her preface to Women Writing War: Ireland 1880-1922 (UCD Press), edited by Tina O’Toole, Gillian McIntosh and Muireann O’Cinnéide. ucdpress.ie