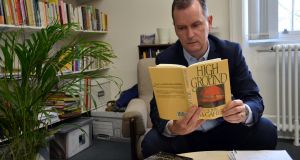 Prof Frank Shovlin, who is researching John McGahern’s work and correspondence for an authorised biography.

The University of Liverpool’s Institute of Irish Studies is launching a new £5,000 book prize in memory of John McGahern, for the best debut novel or short story collection by an Irish writer or writer resident in Ireland.

The inaugural John McGahern Annual Book Prize will be awarded for fiction published in 2019, from across the genres.

The submitted entries will be considered by a judging panel consisting of Colm Tóibín, author and University of Liverpool Chancellor, University of Liverpool Vice-Chancellor, ProfDame Janet Beer; Sarah Gilmartin, regular reviewer of new fiction for The Irish Times; and the Institute of Irish Studies’ Prof Frank Shovlin, who is researching John McGahern’s work and correspondence for an authorised biography.

Prof Shovlin said: “We at the institute are excited to launch this new initiative with the endorsement of John McGahern’s literary estate. The prize, named after one of Ireland’s greatest fiction writers, is designed to encourage, reward and promote new Irish writing.

“We look forward to judging what will undoubtedly be a strong field of entries and hopefully finding a writer who will continue in that great tradition of Irish fiction of which McGahern was such a vital part.”

The prize is open to any Irish writer, or writer resident in Ireland for more than five years, with the winner to be announced at the British Association of Irish Studies (BAIS) conference being hosted in Liverpool in July 2020.

Born in Dublin in 1934, and brought up in the west of Ireland, John McGahern is the author of six highly acclaimed novels and four collections of short stories, a play, an autobiography and a number of essays.

His novel Amongst Women won both the GPA and Irish Times Awards, was shortlisted for the Booker Prize and made into a four-part BBC television series. His final book, Memoir, was published in 2005. John McGahern died in 2006.

The University of Liverpool’s Institute of Irish Studies was established in 1988, and remains the only one of its kind in Great Britain. The Prince of Wales and President Michael D Higgins are joint patrons of the institute, symbolising the significant role it plays in the cultural, political and cultural life of these islands.

Stephenie Meyer on Midnight Sun: ‘This was just a huge, pain-in-the-butt book to write’
Real news has value SUBSCRIBE