Lake Like a Mirror: Surreal but real stories of women in Malaysia 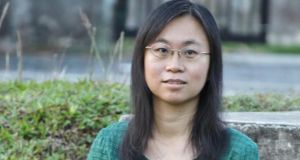 Ho Sok Fong: Life for Malaysian women in a strict, patriarchal country is the focus of the author’s second collection

A giant wall erected by the government. A world where mistresses are a part of the family. An internment camp for women who refuse to fit neatly into a society. A country where teachers can be fired for discussing the work of gay poets. It all sounds very Gilead, but this is not some terrifying, near-future dystopia, rather a depiction of present-day Malaysia in the stories of one of its up-and-coming authors, Ho Sok Fong.

Life for Malaysian women in a strict, patriarchal country is the focus of the author’s second collection, Lake on a Mirror. Its striking, fluid translation has already won an English Pen Translates Award for Natascha Bruce, whose work includes the translation of the short stories of Hong Kong surrealist writer Dorothy Tse. This makes Bruce a fitting interpreter of Sok Fong’s collection, much of which is surreal and unheimlich in nature.

The author, who lives in Malaysia, has a PhD in Chinese language and literature from NTU Singapore. The nine stories in this second collection are troubling and enigmatic, as they try to make sense of a society that seeks to oppress freedom. In precise and unsettling prose, each one considers, in its own unique way, the words that go unsaid and the lives that go unlived.

Two mind-bending pieces – Aminah, and Wind through the Pineapple Leaves, Through the Frangipani – tell about the stories of errant women in a reformer camp. Their crimes include not being devout enough and refusing an arranged marriage. In the camp, women are stripped of their names and individuality and given the name Aminah, which we’re told is as popular a name in Malaysia as Mary or Sarah in the West. Sok Fong uses it as a way to include multiple women in her narrative. Their lives in captivity blur, as do the traditional structures of storytelling, with elements from the first story bleeding in to the next.

In the stunning title story Lake Like a Mirror, a woman is threatened with expulsion for having a Muslim student read a poem by ee cummings

One woman, Hong Bee Lan, remembers herself arriving at the camp, and being stripped of her name in court: “No changes. No right of appeal.” The women remain incarcerated, in “temporary” confinement, until they learn to accept their Muslim fate: “‘God’s love is the rule,’ says an ustaz.” Marriage is presented as the only way out: “It’s time Shaimah got married, but who will her husband be? Not the policeman who raped her.” A third story, October, is equally complex, and sometimes unwieldy, in its presentation of fact. The narrator flits between a life of religious servitude and life in a brothel, both of which seem alarmingly similar.

The other six stories in the collection are less challenging, and arguably offer more pleasure to the reader. Their surrealness is grounded in everyday life, bringing us closer to the characters at the centre. In this, Sok Fung’s collection is reminiscent of the stories of Jan Carson or Diane Cook, or even Miranda July in some of the more offbeat situations.

In The Wall, a government, like many an authoritarian regime, enforces a new way of life while purporting to act in the interest of the people. When a little girl is run over on a motorway, they build a huge barrier around the city: “The only thing was, the wall blocked our back doors too, and now they opened only a little wider than the width of a foot. Wide enough for a cat, or a small dog, but too much of a squeeze for a human.”

In the stunning title story Lake Like a Mirror, a woman is threatened with expulsion for having a Muslim student read a poem by ee cummings: “There are people who prefer not to encounter these things. Naturally, you can teach whatever you like – and, well, I understand that literature shouldn’t be confused with politics … but now we have this problem, and it’s going to be tricky to explain to the higher-ups.”

In The Chest, An Yah, a lonely widow, looks back on 30 years of marriage, “during which they had changed both enormously and hardly at all”. The following story, Summer Tornado, works in contrast to An Yah’s empty nest predicament. Here we meet Su Qin, a lonely second wife trying to bond with her husband’s children in an amusement park: “There were words trapped in Su Qin’s gut. Words that she desperately wanted to say but couldn’t seem to get out. It was never the right moment, and so they had stayed inside her for years, wearing each other down.” It is a line that neatly summarises the focus of the collection as a whole: the damage done to women denied a voice.