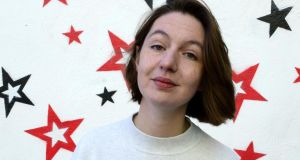 Sally Rooney: “I’m looking forward to the challenge of working in a new form, and of thinking about these characters and their lives in new ways.” Photograph: Cyril Byrne

This week’s big book news is that Lenny Abrahamson, the Oscar-nominated Irish director of Room, is to direct an adaptation of Sally Rooney’s novel Normal People for the BBC, while Cecelia Ahern is working with Nicole Kidman on a TV adaption of her next book, Roar.

Normal People, which will be published next Thursday, was one of three Irish novels longlisted last month for this year’s Man Booker Prize. Rooney, who was raised in Castlebar, will adapt the novel herself for the screen. The story follows a couple from the west of Ireland as their on-off relationship takes them from school to college and into real life.

“I feel very privileged to be working with such an extraordinary team,” Rooney said. “I’m looking forward to the challenge of working in a new form, and of thinking about these characters and their lives in new ways.”

Ahern and Kidman will be executive producers of the series, whose showrunners will be Liz Flahive and Carly Mensch, the creators of the Emmy- and Golden Globe-nominated Netflix series Glow, who have also written for Orange Is the New Black.

Roar, a collection of 30 stories about 30 women which is due to be published on November 1st, is billed as a look at the “sometimes comic, always moving look at the guilt, joys, humiliation and triumphs that define the modern woman’s experience, including the private moments when she feels the need to roar”.

Rooney is the cover star of Saturday’s Ticket, in which she talks to Catherine Conroy about her work and her politics. (Anne Enright reviews Normal People on September 1st.) Other book highlights this Saturday include Sean Sheehan interviewing the people behind two major new books of colourised photographs: Retrographic by Michael D Carroll and The Colour of Time by Dan Jonesand Marina Amaral; an essay by Kill All Normies author Angela Nagle arguing that Ireland’s new liberalism is just tech-driven consumerism dressed up as equality and empowerment; Future Popes of Ireland author Darragh Martin on why Repeal tops, not Lolli-Popes, should define 2018; and this month’s Hennessy New Irish Writing winning short story and poems.

We also have some great reviews: John Boyne on Now We Shall Be Entirely Free by Andrew Miller; Paul McVeigh on Take Nothing with You by Patrick Gale; Kathleen MacMahon on The Shoemaker and His Daughter by Conor O’Clery; Sarah Gilmartin on Heartbreaker by Claudia Dey; Nicole Flattery on Vox by Christina Dalcher; Michael O’Loughlin on Red Thread: On Mazes and Labyrinths by Charlotte Higgins; Caroline O’Donoghue on Now Legwarmers by Pascal O’Loughlin; John Horgan on The Schism of ’68: Catholicism, Contraception and Humanae Vitae in Europe, 1945-1975; Julie Parsons on Reading Lolita in Tehran by Azar Nafisi; and Caitriona O’Reilly on the best new poetry.

If you buy The Irish Times on Saturday in Eason’s, you can purchase The Choice by Edith Eger for €4.99, a saving of €6. Read Arminta Wallace’s interview with the author here.