‘They make the impossible possible, send our imaginations wandering, whisper to us in the dark: What if?’ 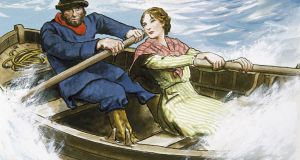 Heroes, heroines, she-roes (is that a thing? If not, I’m claiming it). Whatever you want to call the men and women we idolised as kids, they deserve our thanks for hanging out with us on our bedroom walls and keeping us up as we read about them by torchlight beneath the covers.

It isn’t something we think about often – the people who quietly inspired us as we muddled through our formative years. The sporting legends and pop stars we watched on TV, the inventors and explorers we read about in Ladybird books, the pioneers and warrior queens we learned about at school, even the characters we discovered in novels. Whoever our heroes are and wherever we find them, they make the impossible possible, send our imaginations wandering, whisper to us in the dark: what if?

My “influencers” are a formidable mix of real and fictional women I first encountered as a child or teen, but whose stories and characters still fascinate me. One of them, Grace Darling, inspired my latest novel. These are women who did something astonishing or brave, who left me starry-eyed, or who were simply quietly remarkable.

Grace Darling
An ordinary woman who lived an extraordinary life in a lighthouse off the Northumberland coast, Grace’s story is one of unprecedented female bravery. The Victorians couldn’t get enough of her after her rescuing survivors of a shipwreck, but Grace struggled with the adulation. The intrusion into her private life is believed to have played a part in her untimely death. Grace sat quietly in my mind for four decades until I rediscovered her story. Visiting her lighthouse, understanding the woman behind the heroine and writing a novel about her rather satisfyingly closed the loop on a fascinating school history lesson.

Florence Nightingale
A Victorian lady in a voluminous gown, working in the horrific conditions of war, was morbidly fascinating to my younger self. Nightingale’s approach to treating soldiers in Scutari during the Crimean War changed the face of modern medicine. Romanticised as the Lady with the Lamp and upheld as a poster girl for Victorian virtues, her accomplishments eclipsed those of Mary Seacole, a British-Jamaican nurse who worked behind the lines at the “British Hotel” hospital near Balaclava. Seacole’s story deserves to be more widely known.

Amy Johnson
The Amelia Earhart of Yorkshire. Born in Hull, Johnson was the first woman to fly solo from Britain to Australia, making the journey in 1930 in her beloved Gipsy Moth, Jason. I loved everything about this kick-ass, glamorous Yorkshire lass. She may yet find her way into one of my novels. Jason is now displayed in the Science Museum in London. Johnson died during service in the second World War.

Madonna
Thursday evenings was Top of the Pops in our house. When a dancer from New York burst onto the stage with 100 bangles on her arm, singing about a holiday, I was hooked. Controversial, ballsy, not your typical girl next door, Madonna sang her way through my teenage years and beyond. A legend in her own lifetime and someone I’ve always admired.

Chris Evert
For a wonderful fortnight every summer, the TV was set to Wimbledon and the strawberries and cream came out. My mum was a fan and it was her love of the sport that inspired mine. Chris Evert was my favourite player through the ’70s and early ’80s. Elegant, brilliant, tough and (dreamy teenage sigh) American, her epic battles with Navratilova had me cycling to the local tennis courts.

Charlotte and Emily Brontë
I’d never really thought about the authors of books until I discovered Wuthering Heights and Jane Eyre in my teens. When I read Lynne Reid Banks’ Dark Quartet, the lives of the Brontes became as fascinating to me as those of their characters. A family trip to Haworth Parsonage made an impressionable young Yorkshire girl a lifelong fan of Charlotte and Emily, and their work.

Agnetha Fältskog (aka Anna from Abba)
Abba were my world from the age of seven to 13. My parents even took me and my sister to see them live at Wembley Arena during their world tour in 1979. I know! With her Timotei-blonde hair, blue eyeshadow and that satin mini-dress with a cat on the front, I wanted to be Anna when I grew up. Still do.

Mary Anning
The woman who inspired the rhyme “she sells sea shells on the seashore”, Anning collected fossils at Lyme Regis to sell to visitors to the seaside resort. She caused a sensation when she discovered complete plesiosaur and ichthyosaur skeletons in the early 1800s. As a young girl who loved the sea and dinosaurs, I found Anning fascinating. She was named by the Royal Society as one of the 10 most influential British women in the field of science. Her story is brilliantly portrayed in Tracy Chevalier’s novel, Remarkable Creatures.

Elizabeth Bennet
I first read Pride and Prejudice for A Level English literature when I was 16. Along with Jane Eyre, Lizzie Bennet was a female protagonist I really connected with. I loved everything about her – clever, loyal, spirited, witty and with a passion for the outdoors. Austen’s world was so perfectly English and Lizzie’s complicated relationships, closeness to her sisters and independent spirit really resonated with me at the time.

Eliza Doolittle/Audrey Hepburn
I’ve put them together because it was through Hepburn’s portrayal of Eliza in the movie, My Fair Lady, that I first met her. I played Eliza in the school musical and studied Hepburn’s Eliza for hours. I went on to love her performances, and her style, in Breakfast at Tiffany’s and Roman Holiday. Eliza Doolittle led me to write A Memory of Violets, about London’s real flower sellers, 25 years later.

In a world of Kardashians it’s hard to convince our children that women like Grace Darling were pretty cool. Books like Goodnight Stories for Rebel Girls and the forthcoming Blazing a Trail: Irish Women Who Changed the World by Sarah Webb and Lauren O’Neill shine a light on women whose stories have been forgotten or overlooked. Similarly, historical novelists give a voice to the women history has too-often ignored: women of the space race, female second World War fighter pilots and spies, inventors and explorers – the list goes on.

Whatever we call them, and whether real or fictional, let’s encourage the next generation to find those brave, talented, and sometimes very ordinary people who will whisper to them in the dark: what if?