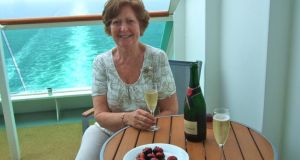 “Two summers ago I cruised in the Mediterranean. The itinerary included Israel, a first for me. In Haifa, I was surprised to find the vessel SS Exodus was now a museum. Many years ago Exodus, by Leon Uris, had captivated my imagination, and it has lived with me ever since, as no other book has. A second reading was called for and I found a well-thumbed copy on board. Whilst certainly not light holiday reading – it covers the birth of the new nation of Israel – it sharpened my focus for the next few days and added a lot more meaning to my visit.

“Uris begins his epic in the grey postwar days when countless displaced Jewish people wandered through Europe, their goal to reach Palestine at any cost. Just one of many ships involved in this massively dangerous operation, Exodus was intercepted at Palestine and the refugees were kept on board in sweltering heat for two weeks before being sentenced to internment camps in Cyprus. There they refused to disembark, went on hunger strike and threatened 12 suicides daily. Exodus’s journey was to cause a major international backlash.

“I found myself contrasting their vessel with my floating world of opulence and indulgence. Theirs had food and water rationing, no air conditioning and only 13 toilets between 4,515 people. I was enjoying a surfeit of sumptuous food, five-star service, a spa and my own ensuite.

“I have to say, on second reading this book touched me again, like no other has ever done.”

In conversation with Sara Keating