‘My characters have moments of triumph, in bed and out of it, just as real people do!’

Roisin Meaney’s new novel returns to the fictitious island of Roone, inspired by a visit to Valentia 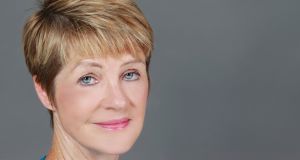 Roisin Meaney: “I love to write about Ireland because I’m Irish, and it’s in my blood. I love the way we interact here, the way we talk, and the way we think.”

The island holds a special place in the stream of our collective consciousness, a fact bestselling novelist Roisin Meaney cleverly exploits in her 16th novel, The Birthday Party.

“Three of my previous books were also set on the fictitious island of Roone,” she explained. “The other Roone books, in order of appearance, are One Summer (2012), After the Wedding (2014) and I’ll be home for Christmas (2016). The island location was originally inspired by a visit I once made to Valentia Island off the Kerry coast.

“Such a beautiful place had to be honoured by setting a book there. The first two books, and now the fourth, are set during the summer months, when Roone, like Valentia, comes alive with an influx of tourists. The third I set over the Christmas period, just to give readers a feel for the island at a quieter time. The advantage of revisiting such a location is that it’s already there, along with a host of familiar characters.”

Despite being translated into several languages, Meaney was not a natural born writer; rather her interest evolved over time.

Her first big break came when The Daisy Picker (2004), about a woman in a rut, won Tivoli publisher’s “Write a Bestseller” competition and a coveted two-book deal.

Putting Out the Stars (2005) should have solidified her ascent but instead disaster struck when Tivoli, a new fiction imprint of Gill and Macmillan, went bust. However, her third novel, The Last Week Of May (2007), won her a new two-book deal with Hodder Headline Ireland. It went on to top the fiction bestseller list in Ireland with the following, The People Next Door (2008), making it to number two. Next came Half Seven on a Thursday (2009), followed by The Things We Do for Love ( 2010), which secured a US publishing deal, along with its successor, Love in the Making (2011). However, it was her eighth book, One Summer (2012), which delivered her greatest commercial success.

“I’ve been with the Irish branch of French publisher Hachette Books since they took over Hodder Headline Ireland in 2008,” said Meaney, “and I’ve been lucky enough to have the same editor for all that time. Ciara Doorley has a keen eye and can spot my weaknesses a mile off but she’s the soul of tact and never pushes her views on me.

“So, at this stage, I trust her advice absolutely. I’ve written a book a year for Hachette since I signed up with them, except for one year when I was contracted to write two (when the Christmas Roone book was published, after a spring publication in the same year). I’m also delighted to have sold into Australia and New Zealand through Hachette Books Australia.”

She was born in Listowel, Co Kerry but her parents, both avid readers, moved to Limerick when she was just eight and the city remains her place of residence today.

Her creative endeavours haven’t been limited to producing books. Over the years she has entered and won various competitions involving slogan writing, with her many prizes including a Ford car, which she sold to pay her fees when she was about to enter teacher training college as she hadn’t yet learnt to drive, and couldn’t afford to run a car.

She peppered her teaching career with breaks including a two-year stint as a high school English teacher in Zimbabwe followed by three years in London working as an advertising copywriter (on foot of those competition wins).

While there, her boss showed her a science-fiction book he had written, but Meaney instinctively knew that she could do better. Eventually, during another career break from teaching she decided to live with her brother in San Francisco, with the intention of finally trying her hand at writing a novel.

She arrived in the US just three days before 9/11 and one of the hijacked planes involved was, like hers, heading west from Boston. Undeterred by the mayhem that ensued, she wrote the book that would earn her a precious foothold in publishing.

“I love to write about Ireland because I’m Irish, and it’s in my blood,” Meaney said. “I love the way we interact here, the way we talk, and the way we think. I couldn’t write with conviction about any place else without living there for a considerable period of time, and I love Ireland too much to do that.

“There’s no danger of people not wanting to read books with an Irish flavour – they seem to be popular the world over. As for the genre, I generally describe them, when asked, as commercial or women’s fiction, or even, slices of life. The good, the bad and the ugly, are all on show just as in real life. However, I deliberately avoid graphic writing, whether it’s violence or sex; it’s just not me.”

Her latest novel starts at the end of May and ends shortly after the local hotelier’s ill-fated 70th birthday party in August. Not everyone is in celebratory mood, and the plot packs plenty of emotional punches, good, bad and maybe even ugly.

Her international fan base will no doubt grieve for a popular islander who dies suddenly, leaving his widow and relatives in mourning. Elsewhere, a young woman (another regular) finds herself pregnant following a drunken encounter, and is struggling to come to terms with it.

On the other side of the world, a young Australian is packing her bags for her fourth trip to the island and is looking forward to seeing her long-distance boyfriend again. In addition, a wife in Dublin prepares to leave her husband and flee with her young son to Roone. The plot is suitably thickened by the arrival of an Italian visitor, who is something of a chaos character for some.

Meaney commented: “Every book is different. Sometimes ideas come without too much thinking, other times it takes weeks and sometimes longer before I’ll fix on something. Inspiration can come from anywhere – a chance remark, a newspaper article, or even a news item on TV.

“In every aspect of my work I try to be realistic. My characters aren’t perfect, and their physical (and other) relationships often fall short of expectations, as in real life. I don’t think that anyone believes ‘Hollywood sex’ is real, and for this reason I feel that it’s dissatisfying for the viewer, (a distortion of what they know from their own experiences to be true). However, that said, my characters have their moments of triumph, in bed and out of it, just as real people do!”
The Birthday Party published by Hachette Books Ireland on June 27th is available in trade paperback at £13.99 and as an ebook. roisinmeaney.com and Twitter @roisinmeaney