‘A jolt to the conscience’: women’s stories of fighting oppression

Yes, We Still Drink Coffee! is a collection of collaborative essays about overcoming injustice 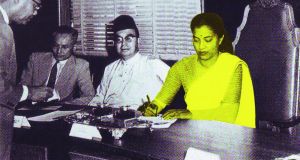 “I had no idea” – that was the immediate reaction of author Monica McInerney when she first read a new collection of highly personal stories told by female human rights defenders. In her foreword to the collection, which is intriguingly entitled Yes, We Still Drink Coffee!, McInerney describes these tales as “a jolt to the conscience”. She confesses: “I hadn’t realised the price women pay for defending human rights around the world, especially in countries such as Turkey, Somalia, Sudan, Kuwait, Palestine, Egypt and Tunisia. ”

It’s a reaction familiar to many people: although we may shake our heads in despair when we read about human rights abuses in distant places, and perhaps sign petitions or donate to international charities, most of us remain unaware of the lived reality of those who fight against injustice in other parts of the world. We don’t know the threats they endure, the risks they run on a daily basis. We have no experience of what it feels like to live in exile or to face imprisonment. And we have no conception of the need to maintain some kind of everyday normality despite the chaos going on around us. Yes, We Still Drink Coffee! is an attempt to bridge that gap in understanding.

The most striking aspect of the book – a joint initiative between two Dublin-based groups: Fighting Words, a free creative writing organisation, and Front Line Defenders, a project that seeks to protect human rights defenders at risk – is the collaborative way that the stories are told. Each one is the product of a series of conversations, pairing female writers such as Catherine Dunne, Hilary Fannin, Lia Mills, Melatu Uche Okorie and Sheila O’Flanagan with female activists from across the globe. The results make for compelling reading.

Sean Love, who founded Fighting Words with Roddy Doyle in 2009, explains the innovative approach. “Front Line Defenders wanted us to collaborate on a writing project with some women human rights defenders around the world. We were delighted to, and so we asked a number of women writers in Ireland who volunteer with us if they would be interested in linking with women human rights defenders in another country, and writing their stories.”

The idea was to focus not only on the vital and often dangerous work the activists were doing, but also to show them as “ordinary” mothers, sisters, wives, partners and daughters who happen to live in extraordinary times and to do extraordinary things. “We wanted to humanise them for the reader, to let them be seen,” says Love. “We didn’t want it be the sort of thing you read in an NGO report. It was about simply connecting.”

As the Kurdish human rights defender Nurcan Baysal explains in her introductory essay, which gave the book its unusual title, “life continues even in war”. She writes: “When a bomb drops, life stops for a minute, but then it continues. Children go to school, parents go to work, the sick are taken to hospital, we drink coffee and sometimes we even make jokes under bombardment, through tear gas and protests.”

Precisely because of its ambitious structure, and the logistics of putting the writers and activists in touch with each other, the book took a long time to come together. Orla Lehane, the education director of Fighting Words, says that they wanted to keep the process open and flexible, not prescriptive or appropriative, so that each couple were free to work together in their own way. “We were keen to make it as much of a partnership as possible, and each pair had their own dynamic,” says Lehane.

“It was slower than we imagined it would be, more complex, more difficult,” says Love. “But what we’ve captured is an incredibly powerful statement of humanity.”

One of the most resonant essays in the collection is about T, a human rights lawyer from North Darfur who provides legal assistance to women and girls subjected to sexual violence. Her story is told by the author and Irish Times columnist Hilary Fannin. When T and Fannin first met, T had been brought to Ireland for six months by Front Line Defenders for a period of respite. Fannin realised that she knew nothing about T’s world. “I was aware that I was in my own home town, where I live and work, and I had to try to hear from T’s perspective, and see how difficult it was to communicate that in a totally different culture.”

Fannin’s preconceived expectations of T were also immediately challenged. “I thought I would meet someone grateful to be safe, glad to have some respite. But I met someone burning with homesickness and longing for her culture and her family. I was struck, too, by her youth. She was so young, quite childlike. But her courage. She had this internal sense of justice and fearlessness. When I really tuned in to her and really tried to hear her, under the homesick, young, vulnerable girl I met, there was a powerful political consciousness. She said: ‘I will die doing this if that is what it takes’.”

What is it like to be on the other side of the table: the interviewee in this unique situation, rather than the interviewer? Hadeel Buqrais is an active human rights defender and writer in her home of Kuwait, where she works to monitor human rights violations by the Kuwaiti government. Her story is told by the author Catherine Dunne, who describes how, in 2017, Buqrais spearheaded an event called Namshi Laha or Walking for Her – a defiant protest walk through the streets of the capital, Kuwait City, in solidarity with the oppressed women of Saudi Arabia. As part of the vicious backlash that followed the walk, Buqrais and her children were subjected to numerous threats to their safety.

Speaking from her home in Kuwait, Buqrais says she still doesn’t feel safe. “We are threatened 24/7. It is a jungle we are living in – you must take the risk to save many lives while trying to protect yourself. The laws are like spiders’ webs, and you don’t want to fall in any trap. Here in Kuwait they want to pick a path for you, just to label you. Books are important because they have a documenting power, they build knowledge, awareness, they help to build bridges. That’s why I didn’t want to lose the chance to open up in Ireland – I am trying to build as many bridges as I can to show people what we are going through in Kuwait.”

Meeting and talking with Catherine Dunne in Dublin was clearly an important encounter for Buqrais. “This is the first time I see myself in the spotlight. I am recognised as a person for the first time. I felt so comfortable with Catherine and I feel I have a friend for life.”

Maintaining the rituals of everyday life – as the women in these stories do, alongside the astounding bravery of their public activism – is a quiet miracle of endurance and survival. As Nurcan Baysal writes: “Amidst all this cruelty, we are the people who refuse to leave this land, who are still here and still struggling. And yes, we still drink coffee!”