More than a map: the Ordnance Survey’s huge but hidden cultural impact

The Ordnance Survey in nineteenth-century Ireland had a huge cultural influence on not just the Gaelic and Anglo-Irish Revivals but also Synge, Joyce and Beckett 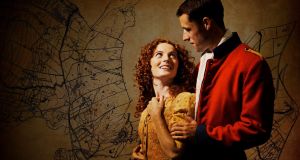 Aoife McMahon and Tim Delap in the Abbey Theatre production of Translations by Brian Friel, directed by Conall Morrison, in 2011 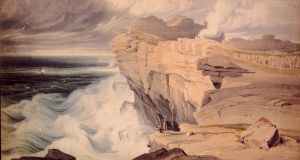 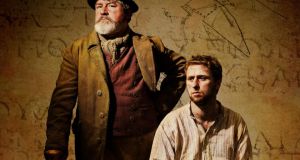 Denis Conway and Aaron Monaghan in the Abbey Theatre production of Translations by Brian Friel, directed by Conall Morrison, in 2011

We all know something of the story of the Ordnance Survey in Ireland in the nineteenth century: perhaps we’ve remarked on a particularly unfortunate translation of a placename, or used a 6-inch map to determine land boundaries. Maybe we have seen or read Brian Friel’s Translations, or heard about the Survey’s part in the anglicisation of Ireland, alongside the National Schools system, or the Catholic Church.

But just as our understanding of the “linguistic contour” (the phrase is Friel’s) of nineteenth-century Ireland has changed in recent years (see, for example, Nicholas Wolf’s excellent recent book, An Irish-Speaking Island), and our assessment of the National School system has been tempered, so too has our understanding of the cultural and political implications of the Ordnance Survey become more nuanced. We now know that it was also one of the most important cultural, historical, literary, and archaeological undertakings that nineteenth-century Ireland saw.

Under the auspices of the survey, musicologist and archaeologist George Petrie assembled an extraordinary team of scholars in his house on Great Charles Street, Dublin. From the mid-1830s to the early 1840s, Irish language scholars John O’Donovan and Eugene O’Curry, painters William Frederick Wakeman and George Victor du Noyer, poets James Clarence Mangan and Samuel Ferguson, and others, all joined Petrie as either employees or friends of the survey.

This unlikely assembly came about because the survey was instructed to make a map at a scale of six inches to one mile. The scale might seem unexceptional to anyone who grew up using the survey’s maps, but at the time it was nothing short of revolutionary – it called for enormous maps of frequently sparsely inhabited areas, and at a level of detail never before seen across such a vast expanse of land. How was the survey to gather the information to fill in such detailed maps? The answer was to task not only the engineers of the army, but also a crew of civilian workers under Petrie’s supervision, to both map the physical features of the landscape and also record every possible aspect of the landscape from its placenames (the initial justification for employing Irish language scholars) and archeology to its productive economy.

As the supervisor of the survey, Thomas Larcom, recognised, the result would be to pass in review “the local history of the whole country”. He wasn’t, it seems, fazed by the paradoxical task before him – you cannot easily be faithful to both local and national scales at once.

The results of this unprecedented collaboration, which the nationalist historian Alice Stopford Green called “a peripatetic university”, are not far to seek. At the most literal level, they can be found in the extraordinary collection of letters and other documents detailing Irish life on the eve of the Famine, which are available today in the library of the Royal Irish Academy (many have also been digitised). The survey’s employees had a profound impact on the nineteenth-century Revivals, both Gaelic and Anglo-Irish, thanks to their identification, collection, translation, and publication of many Irish-language manuscripts. The lines of influence from the survey to Samuel Ferguson and on to Standish O’Grady, Douglas Hyde, Lady Gregory, WB Yeats and other Revivalists are many – without the early antiquarian work of Petrie and his colleagues, the historical work that sparked and sustained the Revivals (no matter how fancifully they interpreted it) would not have been available.

The cultural impact of the survey also has a much longer and more obscure history in the world of Irish literature – its philosophical concerns shaped the extraordinary flourishing of Irish literature that we now call “modernist”. John Millington Synge, James Joyce, and Samuel Beckett – all writing decades after the initial work of the survey had ended – pick up on some of the anxieties of the survey as it struggled to represent a country that was rapidly emerging into modernity. What does this engagement look like in practice? There were three specific ways in which these concerns played into the work of both the Ordnance Survey and Irish modernists.

First, the survey employees (and especially in Petrie’s division) were obsessed with the promise and the perils of historical archiving – they were simultaneously convinced that they could capture all of Irish life, but also paralysed by the possibility that it was disappearing before their eyes even as they tried to record it. As the survey wrestled with this problem, James Clarence Mangan was writing poems, like The Lament of Mac Liag for Kincora, or Lament over the Ruins of the Abbey of Teach Molaga, that narrated the unavoidable failures of archiving processes to preserve the past. This dual sense, of the possibilities and dangers of historical archiving, pervades modernist Irish writing.

Second, the whole survey was consumed by the questions of scale that I mentioned above – how was it possible to capture every detail, ancient and modern, of the entire island? What was appropriate to include or exclude? John O’Donovan realised that nowhere was this more challenging than on the Aran Islands, which crammed so much history into such a small place. When John Millington Synge arrived 60 years after O’Donovan and began writing what would become The Aran Islands, he was primed in the work of the survey, and encountered the same problems – how could he tell the story of islands that had long been seen as isolated pockets of undiluted Irishness preserved among ancient ruins, but were in reality already keyed into global scales of trade and migration? And how could he, like O’Donovan, do justice to the traces of the past that interrupted the present of the islands?

James Joyce, too, worried about scales. His problem was how to fit all of the life of one day in one city into a form (the novel) that had never been designed to be so encyclopaedic. The ambition of Ulysses was nothing less than a reprise of the survey’s, but with Joyce, of course, the project was self-conscious and sometimes ironic. While many readers of Ulysses will know that the Wandering Rocks episode maps out the space of the city – its 19 sections providing what is often thought of as a bird’s eye view of Dublin at 3 o’clock on June 16th, 1904 – Joyce is at his most cartographic in the Ithaca episode, the obsessive lists of which most closely imitate and interrogate the survey’s nineteenth-century conviction that it could be a repository of comprehensive knowledge.

Finally, the survey grappled with the question of how to turn dynamic, lived space into abstract shapes on a map – what geographer JH Andrews memorably called “a paper landscape”– without also rendering the landscape empty of meaning. But perhaps its meaning – its sense of place and locality – was already absent in the rapidly modernising world of the nineteenth century. Samuel Beckett, known for his abstract and unidentifiable (yet always marked by traces of Irishness) landscapes, expertly rendered this philosophical problem in his early work, producing in prose and on stage an almost perfect image of the emptiness of the Ordnance Survey’s landscapes.

The survey, then, not only gathered together an extraordinary library of information that sparked historical scholarship in the nineteenth century, but it helped to call into being some of the best writing that Ireland has ever seen.

Cóilín Parsons is Assistant Professor of English at Georgetown University, in Washington, DC, and author of The Ordnance Survey and Modern Irish Literature (Oxford University Press, 2016)