On first publication it promised a message from the future. It now serves to fix a particularly Irish moment of millennial change and anxiety within its pages 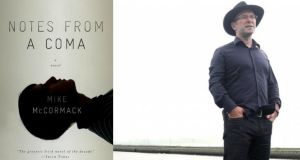 Notes From A Coma by Mike McCormack: a profound and prescient work of literature

What if Jesus was a cyborg? Would you care? What about if he was a cowboy builder selling Mayo holiday homes off the plans? Because that’s partly the implication of Mike McCormack’s Notes from a Coma (2006), a critically well-received but criminally under-read novel which articulated not just the tension between the fantastical Ireland of old and the shiny carapace of technology grafted to it during the Celtic Tiger years, but which also anticipated our data-driven contemporary moment and the increasingly hypertextual experience of day-to-day life.

McCormack has lately won both the Irish Novel of the Year and the Goldsmiths Prize for this year’s single-sentence Solar Bones. But the roots of his long-form experimental tendencies are clearly visible in the prescient and intentionally fractured Notes from a Coma. It is the story of JJ O’Malley, a precocious Romanian orphan adopted by a Louisburgh farmer who, after a personal tragedy, volunteers for an experiment in the use of deep coma as an option in the EU penal system. McCormack himself describes the novel as “John McGahern meets Philip K Dick. Imagine they were commissioned to collaborate on an episode of The X-Files”. It is, potentially, the first great Irish novel of the twenty-first century.

Notes from a Coma begins, deliberately it seems, where the previous hundred years of Irish domestic realism left off. It opens in a farmyard with animals being loaded onto a truck, an event followed by heavy drinking and, in a nod to McGahern, mention of a night in the local barracks. Even the voices of the book’s narrators are recognisable archetypes: the farmer, the reliable neighbour, the schoolteacher, the girl-next-door, and the canny local TD. Where Notes from a Coma strikes towards the future, however, is in McCormack’s use of these testimonies as anchor texts for supplementary discourses in what is the novel’s most distinctive quality.

These elements might initially look like footnotes but one would be wrong to classify them as such because they do not do what footnotes do. They do not cite sources (even to fictional works, as in Flann O’Brien’s The Third Policeman) but instead comprise a literal subtext running underneath the story. McCormack calls these “contingent riffs” on whatever the novel’s narrators are talking about at a given time and, in that way, they serve as a hardcopy analogue of today’s hypertextual rabbit hole. They extend across pages and draw the reader’s attention away from the oral testimonies of the main narrative, informing and distracting in equal measure. An initial mention of Killary, for example, leads to a poetic meditation on Ordovician sandstone and vitamin D deficiency, neurotransmitters and historical hermeneutics.

When Notes from a Coma did receive negative criticism it tended to centre on these riffs without exploring their structural relationship to the words of the narrators. Yet it is crucial to note how they serve as the outer edge of the concentric rings of influence surrounding JJ O’Malley, an authorial effort to inscribe his character as widely as possible in the world. Just as the young JJ writes his physical address inside the cover of his catechism – “Cahir, Louisburgh, Co Mayo, Ireland, the Milky Way, the Universe…” – so too the stories out of which the novel emerges determine his social co-ordinates. Encompassing them all is the broken circumambient of the contingent riffs. This “event horizon” thus restricts the reader’s ultimate knowledge just as JJ cannot know what is beyond the edge of the universe.

A limitation so, but a productive one as McCormack utilises the space within the event horizon to posit an analogy of the nation state itself, a site “where identities as ongoing processes morph and shift through spatio-temporal planes”. And the transitional figure of JJ O’Malley is the singularity at the centre of it all. Throughout the novel he lies there suspended between the past and the future, between life and death, aboard a ship named Le Soleil Noir: a black sun swallowing the son. Because JJ may not be the child of the nation by blood but he certainly qualifies by temperament (and indeed by stereotype) as his interests are “nothing built on formulae”, being instead literature, history and religious instruction.

To these characteristics are yoked the intrusive cybernetics of the twenty-first century. JJ, representative of blarney and banter, is wired into the quantitative via IVs and catheters and EEG monitors. The brain which once interrogated the ecclesiastical is reduced to patterns broadcast across the internet. The child of the nation becomes “a continuous stream of data” (and this when Facebook was still in short trousers). This unsettling integration speaks to an increasingly secular Ireland in which God, no doubt to the unease of many, is merely “an emergent property of neuronal activity in the superior parietal lobule”.

Though naturally this transition does not go unchallenged. Pushing back against the mechanistic are McCormack’s constant references to ghosts (in the machine and otherwise), “souls clearing a path through the technosphere” as the indigenous fantastical confronts the invasive science fictional: our “rush towards the abstract” as “fiction and history are put through narrative loops beyond all unravelling”. No surprise so that, when it comes, JJ’s medical resuscitation is deemed a “resurrection”.

He returns from non-death to discover that his experience has become “part of the nation’s dream”. He is a human hyperlink between what Ireland once was and what it might become. In similar fashion, Notes from a Coma grounds the much lauded Solar Bones in McCormack’s longer history of experimentation. As a novel it is part burning bush, part “telemetry over a paraphrase of our time lines”, and while on first publication it promised a message from the future, it now serves to fix a particularly Irish moment of millennial change and anxiety within its pages.