‘Mia Gallagher is a writer with an artist’s imagination’

Beautiful Pictures of the Lost Homeland, argues Claire Kilroy, is challenging, it is brave, it is original, it is flawed, it is moving, it is fascinating. It is art 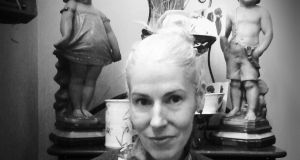 Mia Gallagher displayed an exceptional flair for voice and characterisation in her 2006 debut novel, HellFire, which depicted a young Dublin woman just released from jail and her quest for answers. Beautiful Pictures of the Lost Homeland is set in Dublin, too, and its characters are also searching for answers, but their minds roam beyond Ireland, to Berlin, Bohemia, Brighton.

There are two main timelines. The action opens in the present day. A bombing of the London underground is told from the point of view of the suicide bomber; meanwhile, in Dublin, fortysomething Georgia Madden, recently transitioned into a female body, records a letter to her father, David, from whom she is estranged.

The second timeline is that of Georgia’s childhood, Ireland in the 1970s. Georgie is a little girl trapped in a little boy’s body. Her mother, Aisling, is dying of cancer. Her father is hapless and well-meaning but entirely out of his depth. He is not convinced Georgie is even his child. Aisling exhorts a hippyish young Englishwoman, Lotte, to take care of Georgie after her death. It is hardly a reasonable request, but then, Aisling is on morphine.

Gallagher is a writer with an artist’s imagination. It advances though experiment. Her technique, to no small extent, is to present artefacts and images, much as a visual artist might, and to allow the audience to take from them what it will. Her characters are divided into those who can see the true natures of the people around them, and those who cannot – who cannot see even their own natures. There is a virtual wunderkammer, or cabinet of curiosities, within the novel, which the reader (or “visitor”) is invited to explore as they wander through what is described as a “floating Raum (space/room) outside normal spacetime conventions” in which the “history/herstory” of Bohemia – the lost homeland of the title – throughout the centuries is told. But told by whom? All is revealed in time.

Lotte tries to help take care of Georgie, but she herself needs taking care of. She is one of the special people endowed with the ability to see. She sees that Georgie is a girl. Lotte is the daughter of Anna Bauer, an evacuated Sudeten German who handled the brutalities inflicted on her during the postwar “wild time” – when Bohemian German women were regarded as “fair game” by soldiers – by putting them out of her mind. Anna’s testimony appears as a transcript for a documentary in which she refers to but avoids detailing the ordeal she endured during the “Nazi-time and the flight and the rapings”. Anna’s trauma, however, has surfaced in the next generation. Her son and Lotte’s twin brother, Andreas, blew himself up in an anti-fascist protest while involved with the German radical left.

Those are just the living characters. Then come the dead ones. Or are they? Georgie’s nine-year-old imagination embarks on some arresting and creepy peregrinations to make sense of her predicament in the context of 70s Dublin, where no recognition of such a predicament exists. Gallagher is astonishingly good at dramatising inner turmoil. She doesn’t resort to adjectives; instead she deploys physical manifestations. David’s stress is “something inhuman crouching in front of him. A whirl of matter and energy.” A child can have an imaginary friend. What if that friend turns vindictive, weird, almost vampiric? What if others start to perceive the friend, too? Characters are haunted, though this is not a supernatural novel: it is a novel about how we process trauma.

One way we process it is through committing acts of terrorism: the 1974 Monaghan bombings, the bombing in which Andreas killed himself, the bombing of the London underground – there is “some subliminal connection between repressing root causes, degeneration and protest”, David muses. The identity of the suicide bomber is not revealed until the end, though the hints are there if you look. Gallagher deploys clues throughout, which help decode the text, such as the scent of almonds, or childhood relics.

This is also a novel about identity. There is Georgia’s fractured gender identity (“Georgie wonders what the teenager’s willy is like: small and mushroomy like hers?”). And there is the fracture of identity that comes with postwar displacement: where is home for Anna Bauer? Or for her daughter? Lotte speaks of her “rootless, rotten DNA”. Her surname isn’t even her own, but that of the stepfather who abused her.

There is so much to say about this novel. It is sprawling, but not sloppy; messy, but not a mess. There will be as many readings of it as there are readers. Beautiful Pictures of the Lost Homeland is challenging, it is brave, it is original, it is flawed, it is moving, it is fascinating. It is art.

Claire Kilroy’s The Devil I Know is published by Faber. This review first appeared in the Guardian