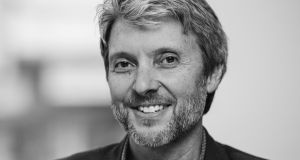 Gary Barker: I deeply want more young men everywhere to find the power of empathy and self-awareness, and the universal truths, that fiction and prose can offer. Photograph: Andy Del Giudice

The last novel I read that made me weep openly was Exit West by Mohsin Hamid. There is a scene about refugees, arriving in the US, unable to speak English, mistreated in the neighbourhoods they move to and by the government officials who receive them. The main character, Saeed, himself a refugee, sees how they internalise this sense that they are sub-humans. And he sees their fear:

“Maybe, Saeed thought initially, they feared he might be able to understand them. Later he suspected something else. That they were ashamed, and that they did not yet know that shame, for the displaced, was a common feeling, and that there was, therefore, no particular shame in being ashamed.”

I can’t explain what it was exactly about that scene that made me cry. Perhaps it was my own encounters with refugees and immigrants, many of them friends and colleagues, and that sense of internalised shame that Hamid portrays so well. Perhaps it was that I read Exit West in the midst of the Trump administration’s ongoing daily mistreatment of poor children and adults fleeing the violence of Central America that I know personally. I have lived in four of Latin America’s most violent countries during my life, in my case by choice. I know the fear that drives refugees here and their desire to stay in their countries of origin with the people and places they know. Maybe I remembered, in reading this scene, just how much I understand their shame.

A fictional account of the refugees gave me a moment to let loose the sadness that I had accumulated about our current immigration crisis and perhaps my years of working with and being friends with immigrants and refugees and wishing I could do more. It felt good to weep, openly. I was reminded of the power of prose to allow that deep sense of empathy and connection, to live in that alternate unreal world that can illuminate our own and allow us to feel.

But not many men do so any more – read fiction, that is. Only 15 per cent of men in the US say they read for pleasure on a given day, and men in the US represent only about a third of fiction readers. Among younger men I know, few can tell me a novel they have read recently that moved them. They can cite a science fiction book or a thriller that impressed them, but few tell me about a book that made them feel deeply.

I direct an organisation that works to promote healthy masculinity and I certainly see in that work how we make it difficult for boys and young men to feel they safely express their vulnerability and their deepest feelings. One boy of 10 years of age we interviewed recently said it well: “Sharing feelings makes you look weak and vulnerable. People will take that vulnerability and use it against you.”

We raise our sons to focus on achievement, on action, to be tough and competitive – all attributes that are important, for our sons and daughters. But we also raise our sons to close off their emotions. This phenomenon is so widespread among men that psychologists have given it a name – alexithymia – and begun to study it. There is no shortage of men seeking therapy who have trouble opening up, and no shortage of women who want male partners to be more emotionally open, aware and connected.

But as we talk about the emotional repression of too many men, it’s important not to make it seem like men are born with this syndrome, that it is inherent to being male. Our emotional straitjacketing as men is something we learn, something instilled in us, inculcated into us every time we are told to “man up” or “that big boys don’t cry”. We as men and boys learn this. Which means we can unlearn it.

One of the areas of deep emotional challenge for men is breaking up – the loss of love and valued relationships. If you don’t believe me, Google “break up” and see how many blogs there are by women complaining of the emotional tone-deafness of men – either during a break-up or causing them to break up with a male partner.

About 10 years ago, on a work trip to Zagreb, a Croatian colleague took me to an amazing museum there called the Museum of Broken Relationships. The museum was created by a couple who had broken up and wanted a way to express loss and to honour the end of a relationship as much as we honour the beginning of them. The museum is filled with letters and objects of love gone wrong.

Upon entering the museum, two things happened. First, I was utterly moved by the range of heartbreak and the creativity of how we humans express it. Second, I was struck by how many of the entries were related to men’s ineptness in relationships. How men’s emotional distance or callousness ended relationships. Or how men have trouble ending relationships without causing pain and destruction. How poorly we cope as men at carrying on after someone has left us.

I expect (as does my publisher) that more women will buy it and read it than men will. But I must confess I truly want men to read it. Young men in particular. I deeply want more young men everywhere to find the power of empathy and self-awareness, and the universal truths, that fiction and prose can offer.

I dare them to read more fiction, fiction that moves them, that allows them to feel vulnerable. Be brave, men. Read until it moves you. You just might weep and your life will be better for it.
Gary Barker is the author of The Museum of Lost Love (World Editions)