Men on the Moon: Lessons from the space race

Book review: A History For The Future and Chasing the Moon take stock of what happened, and what it all meant 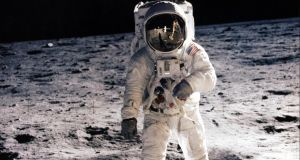 Buzz Aldrin on the moon during the Apollo 11 visit, on July 20th, 1969. Photograph: Nasa/AFP/Getty

When Neil Armstrong eased down the ladder from the Apollo 11 lander’s hatch, the way we look at the moon changed. It remained an inspiration to lovers, poets and artists. But it was also a place you could visit. We’d seen people there on TV. There were footprints in the dust.

There still are: not much changes on the moon. But there are no new ones since the last Apollo mission in 1972. America won a race of its own devising in which it was the only serious competitor, then lost interest. So, it seems, did most other people. We remember those days now when one of the dwindling band of moon men dies, or on anniversaries.

7 Q&A: Can I still pass Covid on after I’ve been vaccinated?

12 Taxing pandemic payment ‘could be unconstitutional’

16 Germany to extend lockdown into February amid new restrictions

28 Speedy rollout of vaccine puts Israel ahead of the rest

30 Miriam Lord: Seanad sits in Dáil chamber but still has that vacant look

32 Joe Biden’s presidential inauguration: Where can I watch, and what are the key moments?

33 Sitting up straight does not prevent or treat back pain, study finds

37 Gary O’Hanlon: ‘Guys are supposed to be fine about miscarriages. But I wasn’t’

39 WHO warns of ‘catastrophic moral failure’ in Covid vaccine distribution