Not To Read review: writer’s essays illuminate the ‘vocation of defeat’ 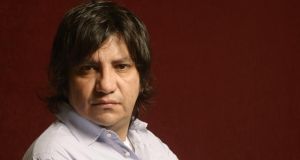 Chilean writer Alejandro Zambra: gives us glimpses of the lives and works of writers for whom putting words on the page is rarely, if ever, a straight-forward matter. Photograph: Ulf Andersen/Getty Images

Book Title:
Not To Read

It is no easy thing to begin a review of a book which consists mostly of charming and insightful book reviews. The comparison invites itself, and is unlikely to be favourable. Not To Read is a collection of Alejandro Zambra’s non-fiction writing; typically short, approachable missives on various south and central American writers published in the Chilean press between 2003 and 2008. Originally published in Spanish as No Leer in 2010, this first English edition (translated by Megan McDowell) adds several more recent pieces to the pile of 60-odd essays.

In the opening cut, “Obligatory Readings”, Zambra says of his teachers at the Chilean National Institute: “That’s how they taught us to read: by beating it into us.” Not To Read is maybe best understood as an antidote to such prescribed reading – a series of exercises designed to circumvent the idea of reading as something which must be done in a particular way, with a particular result. The obligation of the title pertains not just to what must be read – Madame Bovary in this case – but also to how it must be read and what must be learned from it. Zambra’s approach is altogether more ambiguous, more porous: what one gives to reading, and what one receives from it, changes from moment to moment, book to book, writer to writer. Tastes change; personally, politically. Sometimes you’re just not in the mood.

That said, Not To Read is a great introduction to Latin American writing of the last 50 years. Its firm but light-hearted dismissal of “the Boom” (embodied by globally fêted writers such as Gabriel Garcia Marquez and Mario Vargas Llosa) gives way to an erudite and quietly confident discussion of novelists and poets who, as McDowell puts it in her introduction, might not “fulfil European readers’ expectations of Latin American writers – no magic, no local colour, no bombast”.

Instead we get glimpses at the lives and works of a more self-questioning cohort, writers for whom putting words on the page is rarely, if ever, a straight-forward matter. Zambra lingers a while on a line from Clarice Lispector: “I am writing with a great deal of ease and fluidity. One must distrust that.” “That’s how we are in Chile,” Zambra says. “We distrust fluidity, the ease of words; that’s why we stammer so much. It’s not a criticism, just a description.” Indeed, most of Not To Read could be described as description and not criticism (this, in turn, is not a criticism either). Zambra says that he has no theories, only examples; examples which refuse to coalesce within a recognisable theoretical framework, but which do, in time, add up to something like a diverse personal canon: Nicanor Parra, Enrique Lihn, Julio Ramón Ribeyro; Josefina Vicens, Natalia Ginzburg – a fluid and hearteningly well-thumbed set of touchstones.

The first half of the book consists of short newspaper columns equal in length to this review, while the second half contains longer, more digressive essays and lectures. There is more room in this latter section for Zambra to reflect on his own position as a writer, an occupation which is never far from the surface of these texts. Zambra calmly disavows the humblebrag of being more a reader than a writer (an “elegant” but “demagogic” self-construction) and allows the agonies of the writer – a foundational scepticism of language, a near unavoidable unease with the task of communicating – to colour the pleasures and boredoms of the reader.

‘Talking to no one’

What the two activities seem to share, for Zambra at least, is what he calls the “vocation of defeat that is implied by spending hours talking to no one”. Not To Read suggests that there is no ascension in the literary sense; no point at which reading or writing becomes something we have mastered. Taste, Zambra says, is thought of “almost always with a feeling or conviction of superiority associated with the present”. We like to think that we grow out of our childish preferences and misunderstandings, that we become more “mature” – as readers if not as people. “Now we read better: that’s what we believe,” he writes. “How to annul or even confront – to not say combat – that conviction of superiority?”

Not To Read is a wonderfully licentious guide to undermining that conviction. As Roland Barthes, a subtle but consistent influence on this book, once wrote: “No progress in pleasures, nothing but mutations.”