Mark Billingham: why research comes last, and other crime-writing tricks

Simply talking to people who know what they’re talking about is research that’s far more important than boning up on the latest piece of police procedure. Truth, not facts 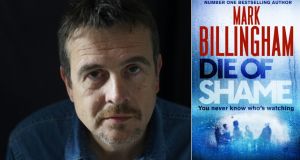 Mark Billingham: To some people, an elaborate series of murders would appear to be fine and dandy, whereas one erroneous coffee shop is clearly unacceptable. It’s all very odd, because I’m writing novels, not documentaries, and – call me naïve – but I’ve always believed that the base ingredient of my job as a novelist is to make things up. Hello! It’s fiction… Photograph: Charlie Hopkinson

Research can get you into trouble. It’s important, of course, but there are pitfalls. An obvious one – especially when writing dark crime novels – is that you can occasionally find yourself dealing with someone who doesn’t see the world in quite the way you do and certainly shouldn’t be left alone with sharp objects. Once, after posting on a forensic anthropology website for information on the speed at which a body might decompose under a particular set of circumstances, I received the following email.

Burying them nude is best.

Aside from…troubling moments such as this, the biggest danger with research is the temptation afterwards to throw every single thing you’ve discovered into the book. More often than not, this is at the expense of the narrative. I’ve spent weeks finding all there is to know about people smuggling/ darts/ playing the euphonium, so I’m damn well going to let the reader know about it whether they like it or not!

It’s rarely a good idea, which explains why a lot of writers do their research afterwards. Counter-intuitive, of course, but this way you can find out only those things you really need to know and so lessen the risk of bombarding the reader with information they really don’t need. The key thing is to decide what is important and what isn’t. Does it matter if I say my detective works for the “Murder Squad”, when in fact his counterpart in the real world probably works for something called the Homicide and Serious Crime Command (Area Six/Team Three)? No, I don’t think it does.

There will always be sticklers, of course, and where once you might have received angry letters (usually written, for some reason, in green ink) these days it’s more likely to be emails in capital letters. There will be complaints letting you know that the enjoyment of an “otherwise good book” was spoiled by the fact that a particular album was released six months earlier than a character claims or that Spurs never actually beat Aston Villa during the 1973 season or, on one memorable occasion, that there ISN’T A BRANCH OF STARBUCKS IN BRIXTON!

To some people, an elaborate series of murders would appear to be fine and dandy, whereas one erroneous coffee shop is clearly unacceptable. It’s all very odd, because I’m writing novels, not documentaries, and – call me naïve – but I’ve always believed that the base ingredient of my job as a novelist is to make things up.

The bottom line is that you take trouble over the things that matter and, when you do this, you quickly discover that the “facts” and the “truth” are not always the same thing.

My latest novel, Die Of Shame, is set among a therapy group for recovering addicts. In many ways, it’s a rather unusual locked-room mystery and it gave me the chance to create characters from a variety of different backgrounds. The lives of addicts are often defined by secrecy and deceit and, while this is perfect for creating credible suspects, I was determined to get as close to the truth of addiction and psychotherapy as possible. I spoke to several psychotherapists and dutifully read the books they recommended, but it was only through a number of long conversations with my closest friend that I really began to grasp the realities of addiction.

Mike was a hard-core addict for 20 years and though he has now been clean for longer than that, he still regularly attends NA meetings and talks about his life as an addict in prisons and schools. He is a remarkable man. As you can imagine, much of what he told me was extremely harrowing, but there were also many hilarious stories which eventually found their way into the book. It proved to me that simply talking to people who know what they’re talking about is research that’s far more important than boning up on the latest piece of police procedure. Truth, not facts. Mike’s insights into the life he once led are at the heart of the story and played a key part in the creation of a crime novel I’m immensely proud of.

The research that went into my previous novel, Time Of Death, was rather more straightforward. It involved no more than spending a day or two in the place I based the fictional town of Polesford on. Oh, and a bit of stuff about bugs, with which I was helped by a wonderful scientist called Prof Lorna Dawson, who has a far more twisted imagination than any crime-writer I know.

Currently, that story is being re-imagined by the BBC for a television adaptation that will air in the autumn. The programme-makers now have to wrestle with some of the same problems I did while writing the book, as well as several that thankfully I never had to worry about. Anyone who has read the book will know that a pig plays a crucial part in the story. Not a speaking part, more of a ‘

“featured extra”. At a recent script meeting, the creative team had to listen respectfully as a letter from the BBC compliance department was read out, stressing the vital importance of the pig in question being “ethically sourced”.

It’s a TV show now. That stuff’s not my problem anymore.

The show will almost certainly upset the green-ink brigade, not just because of any factual errors it might contain, but principally because of the ways in which it differs from the original novel. Some of the names will be different and elements of the storyline will have changed, but that’s because they have to. It’s an adaptation and these things always happen. Such changes do not bother me while the themes and the tone of my original story are still there and as long as the characters remain engaging and credible.

As long as there is still truth.

And I don’t give a stuff where they put a Starbucks.

Die of Shame by Mark Billingham is published in hardback by Little, Brown