Margaret Drabble: ‘What you choose to see is important, to catch the spirit of change’ 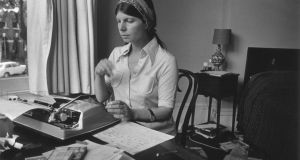 Margaret Drabble in 1974: the young novelist had been feeling neglected, on the sidelines of her social group, and thinking, That’ll fix them! as the pages mounted up. Photograph: Evening Standard/Getty

Margaret Drabble is a dame of the British empire and, as she agrees from her house in Oxford, has been “part of modern life for a very long time”. She was born in Sheffield in England in 1939, and her first novel, A Summer Birdcage, was published in 1963. The title, a quote from a 1612 play by John Webster, suggests the respect for scholarship she gained with her starred – or particularly outstanding – first in English literature from Cambridge University.

Despite that achievement she never considered an academic life. While writing the book she was an aspiring actor with the Royal Shakespeare Company, married to the actor Clive Swift and marooned in motherhood. Some years later she admitted that she had been feeling neglected, on the sidelines of her social group, and thinking, That’ll fix them! as the pages mounted up.

“Of course it didn’t,” she says. But made a dame for services to literature in 2008, a year after her second husband, the biographer Michael Holroyd, was knighted for the same reason, she agrees that perhaps both of them could be seen as among the people to be “fixed”. “Yes. Perhaps we are. Perhaps I’m one of the people who needs to be put in her proper place.”

Drabble, who is taking part in West Cork Literary Festival next week, has in a sense been fixing people through her fiction all her life. She began at a gallop, A Summer Birdcage was followed by The Garrick Year (1964), The Millstone (1965), Jerusalem the Golden (1967) and The Waterfall (1969).

I had to defend the film and my views on unmarried mothers. We didn’t call them single parents back then

She was pleased three years ago with an article by the writer Tessa Hadley, who described The Millstone as “a beautiful and momentous book”. As “a comedy of virginity” it has some similarity of theme with Ian McEwan’s On Chesil Beach, despite half a century between them.

“I haven’t read it, or seen the film. And I don’t want to. It’s such a worrying topic, the pain of not knowing what to do when first married. We knew nothing about sexuality at all, really. And as girls we were all frightened of getting pregnant. It was so easy to conceive and the consequences were so enormous.”

Apart from a four-part BBC television adaptation of The Waterfall, which she has now “completely forgotten, I’m afraid”, The Millstone is her only book to reach the cinema screen (as A Touch of Love, in 1969, with Eleanor Bron and Ian McKellen).

“The literary reviews were fine, on the whole, but when it became a film there were protests. It was a different kind of audience, and I had to defend it and my views on unmarried mothers. We didn’t call them single parents back then.”

I suggest that some passages from those initial novels share what Virginia Woolf once called a passion to describe. “I suppose I do share that. Trying to put into words, for no reason, what I’m looking at in daily life. It’s true. It is a passion.”

Drabble discovered Woolf through her own mother, Kathleen Marie Bloor, who as an earlier convert had gone to hear Woolf speak in Cambridge, from where Bloor also had graduated in English. Drabble’s afterword to The Peppered Moth (2000) revealed that the novel, an interrogation of evolution, mutability and human affection, was really about her mother.

It’s the going places that I like best. It’s all an adventure

“Our relationship was very close and also very difficult. She was an unhappy person, although my father was a kind and generous man. She was frustrated, I think. She had a really good mind and had been a teacher but had to give that up when she married. She got back to it during the war but after that she was stopped again; the schools wouldn’t hire married women as teachers. It was a problem I couldn’t solve. I think a lot of women of my generation tried to give their mothers a better life, but history was against us. And them.”

One of the few perceptible interruptions in Drabble’s career came with her time as editor of the fifth, critically acclaimed edition of The Oxford Companion to English Literature, which appeared in 1985. “It was five years of solid work, but it was quite fun, and in a way that was my going back to university; it was a privilege to do that – and to get paid for it!”

With brief mentions of her biographies of Arnold Bennett and Angus Wilson, the surprised pleasure she took in winning the Golden Pen Award in 2011 and the provenance of her often resonant titles, we slip conversationally past several of Drabble’s 18-strong backlist, one of the more prominent being The Pure Gold Baby (2013).

Here again is a single mother; here again is the confidence to offer characters engaged in the intellectual life, scholars and writers. And again as with so much of her work a proposition – life with a mentally disabled child – becomes something deeply enriched by research, apparent simplicity becoming far-reaching and enlightening, in this case involving anthropology and mitochondrial DNA and, basically, how people live with one another.

Her use of a unique authorial voice to examine the moral ambiguities of modern society is tempered by a sense of closure in her newest book, The Dark Flood Rises (2016). Although suggestive of apocalypse – and the ominous title is not misleading, for indeed there are floods, climate change and, of course, the dark which threatens us all in the end – the book reads like a thriller. “I tried to give it a lighter tone so that it wouldn’t be very heavy and sad. But getting the right tone is quite hard work, making sure the story isn’t too depressing.”

It’s not. It’s often funny, with a lot of fixing and imbued with Drabble’s scepticism, steeped in the brine of Simone de Beauvoir’s rage that, if we are going to live to old age, we should be given something to live for. Drabble allows her ageing characters to choose, where they can, for themselves , with a bleak hint of Samuel Beckett sprinkling salt on the wounds of the “care” industry lightened by an evocation of the Canaries as the legendary Happy Isles, the gardens of the Hesperides.

It’s true that I still have a great interest in pottering around the country, visiting the little galleries in small towns

As a member of a book group – Drabble enjoyed recently discovering Elizabeth Strout – a close friend of the late Doris Lessing (“I didn’t follow her footsteps in my life, but she was a huge influence on my thinking”) with more than half a century of novels to her name, and the beguiling memoir The Pattern in the Carpet (2009) adding to her non-fiction, it’s probably unfair to ask for her favourite of her own titles.

She thinks for a moment and then selects The Needle’s Eye, from 1972, a searing account of self – or soul – sacrifice. “I still feel it is an important book. I had a bigger view of life when I wrote that. I was somebody with a wider grasp. And I’d been reading Henry James, perhaps too much. There’s a lot of renunciation in Henry James.”

So here we are, wondering if she’s been put in her proper place. A New York Times assessment by Phyllis Rose in 1980 described Margaret Drabble as “the novelist people will turn to a hundred years from now to find out how things were . . . Vast and unglamorous, Miss Drabble’s Britain is her most important character.”

“That’s very nicely said. And it’s true that I still have a great interest in pottering around the country, visiting the little galleries in small towns. You see what’s happening, the nail bars and betting shops growing around these hopeful buildings, the nature of British town life changing in front of our eyes. What you choose to see is very important now, to catch the spirit of change as it is happening. It’s all good material.”

Her tone is speculative. Is she working on another novel?

“I think I’ve finished with that for the moment. Perhaps forever.”

I hesitate. Is it all right with her for us to write that?

An Evening with Margaret Drabble takes place at the Maritime Hotel in Bantry on Wednesday, July 18th, as part of West Cork Literary Festival