‘Make America Great Again is not a good poem. It’s a stupid poem ’

Donald Trump is the epitome of the bad poet, says Eileen Myles, newly celebrated poet of queer culture, whose work, and take on US culture, are increasingly finding the spotlight 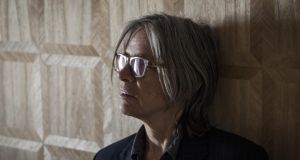 Eileen Myles: “I can’t tell you the amount of people who want me to write articles about ageing. Really? Guy at the top of his powers, is he asked to write about ageing? What, am I a rotting corpse out here?” Photograph: Emily Berl/New York Times

‘It’s too late,” the poet Eileen Myles says about the impact of getting more famous, or winning any of the major awards that have generally eluded her. “I’m already ruined. Whatever I am, I’m not going to change how I write.

“The problem with being celebrated is that you have to figure out how to find time again. The thing that was so wonderful about New York in the 1970s is that you had all of the time in the world. Nobody wanted anything from you. You would just unplug your phone. There was no social media. There were no answering machines. You were so ‘there’. And as an ex-Catholic all I wanted to do was be there, because I had never been there. I was always told what to think and what to do.”

We’re talking in Dublin, where Myles will later give a reading for the first time, in a joint event between Poetry Ireland and Trinity College.

Although Myles has been published since the 1970s, for most of her life her fame has been limited to the worlds of American poetry and queer culture.

Perhaps her best known work, the brilliant memoir-like novel Chelsea Girls, was republished in 2015. A new selected collection, I Must Be Living Twice, is a great place to start. Myles’s poems flow freely, cascading down the page, and are often chatty, funny, sexy, urgent and brilliant.

When Myles reads her work aloud it comes to life, the words fizzing into action. Humour that previously chilled out in the edges of the text jolts awake. That languishing in the corners could also refer to her career and persona, like a pool player hanging in the shadows, waiting to shark the chumps when the time is right.

Shining a Light on Eileen Myles was the title of a New Yorker piece in 2015. Last April a spread in the New York Times, headed “The poet idolized by a new generation of feminists”, featured a photo shoot of people who cite Myles as an inspiration: Tavi Gevinson, Hari Nef, Staceyann Chin, Beth Ditto, Justin Vivian Bond, Porochista Khakpour and Emily Gould.

“People were joking, ‘What, do you own stock in the New York Times?’ ” Myles says, laughing. “I still keep being in it. It’s like, ‘When in doubt, put Eileen in.’ Very strange. I’m from Boston originally, and in the Boston Globe I got a spread. It was crazy. When that died down, December [2015] came and Transparent [an Amazon television series] got released, and I had poems on that.

“The irritating one is when people say, ‘You’ve become known because of Transparent.’ I was becoming known before that. But on the other hand I love when somebody says, ‘I didn’t know your work until I heard it on that TV show.’

“I’m really a child of the 1950s and 1960s, which was very much the golden age of TV. Nobody knew what TV was, and you got introduced to beatniks on TV: the whole culture . . . Television distributed Beatnikhood, which was so affiliated with poetry. In a way TV introduced me to poetry, so I feel that it’s great I would then be floated by the same medium.”

Myles and Jill Soloway, the creator of Transparent, a groundbreaking series that has won several Emmys and Golden Globes, were a couple for a time. Now Myles is working on a film adaptation of Chelsea Girls for Amazon Studios.

In a way Myles is lucky to be here at all. She talks about the “destruction and damage” in the New York of yore: “Just by sheer luck I’m not dead. I should have been by the way I lived.”

Myles came closest to checking out in the 1980s. “In my early 30s, I mean, I was just a falling-down drunk. I was not going to survive. I managed to move to the other column through the influence of friends who were starting to do something different.”

We talk a lot about Hillary Clinton. “If those forces were mounted for a male candidate, that would be considered an assault on the union, an assault on the office of the president, on the election, on our democratic process. If it happened in any other country we would have a new election. But it happened to Hillary, so ‘She just f***ed up,’ ‘She was a mediocre candidate,’ ‘She failed the Democratic Party.’ It’s like, woah. And women are repeating this.”

We also talk about Donald Trump. “Trump is such a bad poet. Trump is the epitome of the bad poet. ‘Make America Great Again’ is not a good poem. It’s a stupid poem.”

And we talk about Myles’s staying power. “You get kicked in, but I didn’t go away, they didn’t make me go away, and some of these guys did go away, you know?

Chip on their shoulders

“Perhaps one of the biggest problems for women is the generations are played against each other all the time. I just didn’t understand the chip that older women have on their shoulders about the fact that they have been devalued for 20 years, and they’re seeing hot crews of young girls pouring in, full of excitement and ambition. When you’re young and you’re hot you don’t quite get that you’re getting a pass because of your beauty, because you’ve never been anything but that. And so again it’s as maddening as sexism itself. There’s no conversation.

“We don’t talk about any of those things, so we’re certainly not going to say, ‘And, girls, just understand that you will be commodified in a way that men won’t. Men’s skills, men’s intelligence, men’s powers will be commodified, but your beauty is what’s chiefly getting commodified, and everything else is being pinned to that.’

“It almost seems like you need an older generation to tell you that. It’s a real education problem, that we don’t have that exchange, and men do. The way that young men honour and support older men is obvious. I’ve certainly experienced some hero worship, but I’ve also experienced some takedowns.

“I can’t tell you the amount of people who want me to write articles about ageing. Really? Guy at the top of his powers, is he asked to write about ageing? What, am I a rotting corpse out here? I thought I was having my moment.”

Does Myles feel vindicated now that the spotlight is growing brighter around her? “Greatly. Enormously. Of course. Yet I’ve not won any book awards. It’s still a class issue . . . I’m from the Ginsberg-Ashbery, much more experimental canon. Kathy Acker said it first: people like us, we don’t get grants. We get publicity. I’ve gone from being a cool poet: whenever I would read at a graduate programme over the years people would go, ‘The thing about Eileen Myles is that she’s cool.’ I just felt, f*** you.”

At close quarters the playful and knowing indignation is brilliant fun. “Badass is one of my least favourite words, again, because it makes all sorts of more interesting things be unsaid still. It’s like if you call me a punk poet you’re not saying dyke, you’re not saying working class, which is not that I want you to say those things, but you’re not talking about vernacular. You’re not talking in any precise way about the writing. So I wind up sounding like a female Bukowski, which, you know . . .” Myles’s eyebrows rise.

She remembers a friend, René Ricard, joking with her years ago. “He was in the Warhol film Chelsea Girls, and he was a poet and art writer and somebody I knew, who died a few years ago. He was very much the king of the nightlife, and very funny, very nasty, sort of a bitchy – well, not so much a queen, but a very New York character. I remember him telling me when I was pretty young, ‘You’re going to get famous when you’re really old, like when you’re 50.’ And I was like, Oh my God, that’s the worst thing anybody has said. But it’s kind of right, even later.”