‘The Good Son’ and the wicked cheer 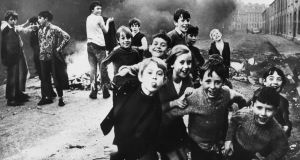 Children in Belfast jeer at British soldiers in December 1971 while a fire smoulders in the street behind them. Photograph: Keystone/Getty Images

Recently, I came across Occupied Pleasures, a collection of photographs of everyday leisure activities in Palestine taken by the Jordanian photographer Tanya Habjouqa. There are images of teenage surfers, free runners, yoga enthusiasts, picnickers and bodybuilders taken against blue skies and broken streets. The intention was not to minimise the difficulties of life in the occupied territories, but to portray nuance, resilience, reality. And the photographs are fun. To the faraway observer, that sense of fun makes a compelling point of entry to a world she cannot hope to fully understand.

The photographs reminded me very much of the humour and vibrancy, the unmistakable life, in Paul McVeigh’s The Good Son, in which Mickey Donnelly navigates a world into which he doesn’t really fit. Ten years old and looking to a future he hopes will save him from the vicious, performed masculinity of the other boys and the vacillating affections of pretty girls, Mickey’s is a convincing voice, all the more so because he’s funny. And his voice gives us that compelling point of entry into a world many of us have never known: that of fractured, Troubles-era Belfast, where life must go on despite the violence, despite the occupation, despite the injustice, despite the mistrust and uncertainty and wrath and fear that colour every moment of every day.

One might state that this is cleverly applied “black humour”, but I’m not sure that the term is complex enough here. Sure, we are laughing at antics played out in a smoking landscape, where the tasks of everyday are frequently disrupted by antagonists, authoritarians, bigger horrors. And sure, that is one of the ways in which we cope with such disruption. If you don’t laugh, you’ll cry. When things are stressful or frightening, people develop thick skin and an appreciation for the absurd, for gallows humour. We treat those things that are grave and critical with acerbic indifference. We are sarcastic about drip-fed hope. We poke fun at the Reaper. Deploying this kind of narrative voice in fiction can soften a reader’s disposition towards a difficult topic. In especially skilful hands it can be a radical act, sharpening transgressive fiction or teasing out a reader’s complicity in monstrous acts.

For McVeigh, such humour is both his characters’ psychological safeguard and a devastating literary technique, for it serves first as a delightful key to Mickey’s world, and then, once we are comfortable, as a horrifying contrast. The more we appreciate that humour, the gentle, funny banalities of day-to-day life, the more we worry, and the more defined the background threats of Mickey’s world – poverty, confinement, chaos, retribution – become.

Mickey’s likeability is more pronounced because we are afraid, almost from the book’s opening, that the environment he lives in could kill him, if not physically then certainly spiritually. Presented in such a cheerful voice, Mickey’s ma’s circumstances are not normalised or made mellow; rather they seem all the more harrowing. His older brother’s reinvention as a local hard man only further exposes his vulnerabilities as an unsure youth in a community making big demands of him.

McVeigh’s wicked sense of humour and capacity for perfectly capturing childhood’s vibrancy functions initially as a friendly welcome, but once we’ve given over to the book’s charms, it takes on a sickening, almost coercive flavour. We are so invested in Mickey’s capacity for joy that we cannot look away when that joy is threatened.

None of those things that threaten Mickey or his family are substantial enough to hinder the city he lives in. This, too, is important: no matter what Mickey endures, whether it is a private heartbreak or shared public torment, no matter how it might make us laugh or cry, Belfast goes on. And so must life for Mickey, even though around him bombs explode and men die and neighbours threaten neighbours, even though he finds himself capable, too, of dark deeds.

There are particular challenges to growing up in a war zone, but McVeigh reminds us that the common challenges of growing up have to be dealt with whether your world is calm or chaotic. Mickey deals with small embarrassments, irritating peers, an overactive imagination, unrealistic dreams, and the reader smiles and laughs because these are things every reader recognises. Life goes on, as it does for surfer girls and Parkour boys in Palestine, not for revolutionary purposes, not for grand gestures, but because life must.

Lisa McInerney is the author of The Glorious Heresies, winner of the 2016 Baileys Women’s Prize for Fiction and the 2016 Desmond Elliott Prize. Throughout July, we shall explore The Good Son from many angles, not just with its author but also with contributions by several other well-known writers, including Laura van den Berg, whom Salon.com called “the best young writer in America”; Alison Moore, Booker-shortlisted author of The Lighthouse; Lucy Caldwell, winner of the Dylan Thomas & Rooney Prize; Danielle McLaughlin; Paul Burston, author of seven novels and founder of The Polari Salon & Prize; as well as Sarah Hutchings of City Reads Brighton; and his British publisher, Jen Emery-Hamilton. The month will culminate in a podcast in which the author will discuss his novel with Martin Doyle, assistant literary editor of The Irish Times. This will be published on July 31st and recorded at a public event in the Irish Writers Centre, Parnell Square, Dublin, on Tuesday, July 19th, at 7.30pm.