If Banville succeeds in making readers return to Henry James, this lively enterprise will prove a useful and generous gesture to a rich and nuanced American classic 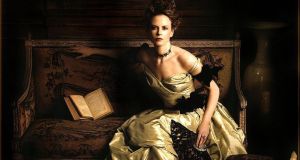 In the spring of 1879 the American master Henry James spent three months in Florence during which he began drafting the novel which would become his most famous work.

The Portrait of a Lady is a strange and wonderful sexual minefield, as overwhelming as a heated greenhouse filled with plants, intoxicating and consolidated by menace. It is not quite his finest novel – The Spoils of Poynton, The Ambassadors and The Golden Bowl were to follow – yet it was a landmark achievement for him and remains a defining narrative of psychological realism. He was 38 on its publication in 1881 and as his doomed friend, Constance Fenimore Woolson, also a writer, assured him, it would, and did, elevate him to a new level.

The Portrait of a Lady tells the story of Isabel Archer from Albany, New York; young, idealistic, independent of mind and sufficiently interesting to engage the interest of a caustic old aunt, Mrs Touchett, who sees her as a project. The venerable dame brings the girl with her to England where Mr Touchett, a retired banker, resides. The intention is to enable Isabel to indulge her notion of freedom and explore Europe. Her pioneering curiosity emboldens her to reject an affable lord who comes complete with a castle.

Early in the third person narrative, poised, wry and eloquent with intent, the reader is informed; “It is true that among her contemporaries she passed for a young woman of extraordinary profundity; for these excellent people never withheld their admiration from a reach of intellect of which they themselves were not conscious, and spoke of Isabel as a prodigy of learning, a creature reported to have read the classic authors – in translation.”

An earlier Jamesian heroine, Daisy Miller, had already ventured over to Europe. The obvious theme is that of the innocent spirit from the New World risking the dangers of the corrupt older one. Daisy perishes from malaria; Isabel was also following in the footsteps of Flaubert’s Emma and Tolstoy’s Anna, both of whom had killed themselves, while Hardy’s Tess, a pure woman, if one with a complicated history, would also end tragically although not for another decade, in 1891.

Born in New York, a son of an outspoken father and brother of the philosopher William, the young James had bided his time in Paris and knew Flaubert, Turgenev and Zola. He also understood literature and its ability to depict the life of the mind; he was sophisticated, evasive, European by inclination if not birth and he believed that character created incident.

Ambivalence dictated his approach to his art as well as his life. At the close of The Portrait of a Lady, Isabel, by then the mother of a dead baby, having disobeyed her devious, egotistical husband, hurries to England to be at the deathbed of her loving cousin Ralph. After a devastating final exchange with him, she is left on the edge of what? Rebellion or submissive acceptance of her plight? Meanwhile, her most aggressively determined suitor, Caspar Goodwood, who has followed her across the ocean, appears to finally admit defeat.

For this he revised the novel, making subtle changes, a word here, a phrase there

Henry James did toy with writing a sequel, and although he felt what he had done “was complete in itself” he did add, “the rest may be taken up or not, later”. He did return to it, 25 years later, in 1906 when preparing his New York edition. For this he revised the novel, making subtle changes, a word here, a phrase there. Most importantly he supplied a long preface in which he ruminates about the house of fiction which “has in short not one window, but a million – a number of possible windows . . .” He concludes: “There is really too much to say.”

James did not write a sequel. Irish writer John Banville has – and has done so with wit, daring, vivid description and a sense of fun. That said: why? Why would a novelist with an international reputation as a literary stylist expend his powers on impersonating the very different, often sonorous prose and syntax of a writer he clearly admires? Could it be to assist Lord Warburton? Sequels tend to be commercial ventures, Mrs Osmond is not. Banville knows the book and has exchanged his familiar laconic, first-person voice for a knowing, detached, somewhat gleeful pastiche which consistently avoids the very real menace James summoned at will.

James does begin the novel at a leisurely pace which Banville emulates, initially, almost too diligently: “In the street outside the sun was shining, for the afternoon still lingered – the seemingly endless journey from Gardencourt, first by dogcart along by the Thames, with their luggage piled on a four-wheeler behind them, and then on the hurrying train from Pangbourne, had in reality taken less than two hours in total.”

Not so much older, but certainly wiser, Isabel is likeable, not quite as formidable as George Eliot’s Dorothea Brooke and clearly not as lucky. Both continue to intrigue. Banville sets the scene for his battle-scarred and resourceful Isabel: “It was a fact that, for Isabel, Europe had been unavoidable; Europe had been her fate and so it was still. Yet she should not have allowed her aunt to thrust her upon that fabled continent s precipitately, as a free-trader’s posse might snatch from a doorway of a dockside tavern some poor young hearty fuddled on rum and press him into a captive life upon the rolling ocean; indeed she should not have allowed it.”

Central to the James classic is that the Old World wrong done to Isabel is actually perpetrated by two expatriate Americans. Banville reduces the dastardly Gilbert Osmond to a clown and the comic touches evident in the James novel become openly funny, while the characters are even sharper.

There is an impressive scene in which Isabel is demolished by Osmond and Merle’s now adult and acidic daughter Pansy. But The Portrait of a Lady is an architectural novel. Much of its genius lies in the Miltonic imagery; Osmond inhabits a villa in which the windows are heavy lids, not eyes. Its facade “had a somewhat incommunicative character. It was the mask, not the face of the house.” Even the undergrowth in the garden is rife with sinister intent. Nowhere in Mrs Osmond does Banville achieve the devastating chill of James’s famous chapter 42 in which Isabel, informed by the murky reality of her situation, sustains an all-night vigil. Although Banville pits Isabel against Osmond in some vicious exchanges, his prevailing tone is far lighter and he cannot resist a very obvious gag with a missing satchel stuffed full of banknotes.

John Banville does not need Henry James, and James certainly does not need Banville. Mrs Osmond is an entertaining homage. But if Banville succeeds, and he should, in making readers return to Henry James, this lively enterprise will prove a useful and generous gesture to a rich and nuanced American classic.