A Troubles novel? Nobody wants that

Adrian McKinty: ‘I think readers can sniff out authenticity. Before I’d been making stuff up but now I was telling the truth’ 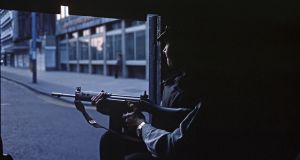 I wanted a protagonist that would generate a lot of friction and fracture lines so I made him Catholic, a policeman, bohemian, middle-class and I gave him a Derry accent. Photograph: Getty Images

It was July 2011 and I was facing something of a crisis. I had missed the deadline for my new novel by six months and I still had no book. I’d been writing thrillers and mystery novels at a pace of a book a year for the previous eight years and now the well had run completely dry. I’d been teaching during the day and at night staring at a blank computer screen with bleary eyes.

Half a year of worsening writer’s block and no pages at all.

And then one morning very late or very early I wrote: “The riot had taken on a beauty of its own now. Arcs of gasoline fire under the crescent moon. Crimson tracer in mystical parabolas. Phosphorescence from the barrels of plastic bullet guns. A distant yelling like that of men below decks in a torpedoed prison ship. The scarlet whoosh of Molotovs. Helicopters everywhere: their spotlights finding one another like lovers in the Afterlife.”

When I woke up the next day I read the paragraph and liked it but I was immediately alarmed because I knew that this passage had taken place in Belfast. When my first novel had come out in 2003 it had been well reviewed and I’d been called in to pitch a TV show to the BBC. I’d offered them a Sweeney/ Starsky and Hutch-style crime drama set in Belfast during the ’70s and had been told in no uncertain terms that this would not fly. A wise old owl at the Beeb advised me to avoid Northern Ireland as a subject matter at all costs because “nobody in Ireland wanted to think about the Troubles ever again, no one in England wanted to think about Northern Ireland ever again and the Americans still thought of Ireland in terms of The Quiet Man and wouldn’t know what the hell I was talking about.”

In 2003 the Irish crime fiction scene was on life support with maybe a dozen titles per year. I saw that the wise old owl was right. So, for the next eight years, I’d written about pretty much everywhere I’d ever been to in my life except Belfast.

Until now. Not only was this 2am paragraph Belfast but it was Belfast in 1981 right after Bobby Sands’s death in the dark heart of the Troubles. I called the book The Cold Cold Ground and assumed my publishers weren’t going to be too happy with a Troubles-era novel – but when everybody’s telling you not to write about a certain subject it’s almost certainly the subject you should be writing about. I sent the synopsis to my US publishers who promptly turned it down but fortunately my UK publishers said yes.

I grew up alienated from literary fiction, which I saw as a genre for and about upper-middle-class people. Consequently I’ve always wanted to use crime fiction as a vector for making art; in Cold Cold Ground I tried to do exactly that as well as discussing a lot of interesting themes, particularly race, religion, gender and sexuality. I set the book in the terrace where I was literally born and raised, in a working-class housing estate in Carrickfergus. I wanted a protagonist that would generate a lot of friction and fracture lines with the people of that street so I made him Catholic, a policeman, bohemian, middle-class and I gave him a Derry accent.

When the novel came out it not only got the best reviews of my career but it actually sold, which was a complete novelty. I’d always been well reviewed but no one had actually gone out and bought the bloody books. I think readers can sniff out authenticity. Before I’d been making stuff up but now I was telling the truth. Not what Werner Herzog calls the truth of accountants, but artistic and emotional truth. Thirty years had passed and people were ready to hear about had really happened during Belfast’s 30-year suicide attempt from 1968-1998.

I thought The Cold Cold Ground was going to be only book I’d ever do on the Troubles so in the end I tried to say too much and I forgot things. I remembered the bombings and murder and racism and homophobia but I forgot that in the midst of tragedy Belfast has always used jet-black humour as its coping mechanism.

In the subsequent books in what became the Sean Duffy series I managed to wrangle the tone closer to the way it actually was back then. Chiaroscuro works because the darkness and light are in balance.

Rain Dogs begins in the winter of 1987. A young woman is found dead in Carrickfergus Castle just outside of Belfast. The woman is a reporter for the Financial Times who was allegedly depressed and suicidal. Rain Dogs starts as a conventional locked room mystery, becomes an almost meta reflection on locked room mysteries in general, detours to Finland and the “abortion special” overnight ferry to Liverpool before bringing it back to Belfast again.

Two men I met in real life – Jimmy Savile and Muhammad Ali – are catalysts for the book and both of them make an appearance in the novel.

Rain Dogs is the fifth book in the Sean Duffy series and by this stage I understand the characters well enough to let them tell their story through me. Duffy still lives in the house where I was born (113 Coronation Road, Carrickfergus) and he is still a man out of joint with his neighbours, ’80s music, Thatcher, Reagan, the RUC, the Provos and the whole scene. The book won the Edgar Award which was a completely unexpected international breakthrough.

There is one more Sean Duffy novel after Rain Dogs, the economically titled Police At The Station And They Don’t Look Friendly, but Rain Dogs works as a standalone and it ends on the kind of rickety transition that I love to see in novels and music. Happiness for Sean is out there, as it is for all of us, fleeting and frail, just a little snowdrop of light, but definitely there, burrowing out of the dark earth where it’s been hiding all along.
Rain Dogs by Adrian McKinty is October’s Irish Times Book Club pick. Ian Rankin, Brian McGilloway and Val McDermid will be contributing articles about McKinty throughout the month, along with an essay by a serving Catholic PSNI officer, which will be published anonymously as his life is still under threat from dissident paramilitaries. The series will culminate in a public interview with McKinty conducted by Irish Times Books Editor Martin Doyle in Belfast’s Europa Hotel (Europe’s most bombed etc) on Saturday, October 28th, at 1pm as part of the inaugural NOIRELAND International Crime Fiction Festival, which runs from October 27th-29th. The podcast of the interview will be available on October 30th.