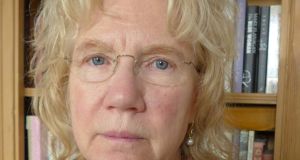 Maggie Hamand: I tried to write with humanity, and respect. I don’t have any wish to denigrate religion, and indeed, there are passages in the book based on my own experience of prayer and God’s presence.

The premise of my latest novel, Virgin & Child, will no doubt be seen as so outrageous and provocative that it calls for some explanation.

It’s a novel that arose out of a thought experiment, which I wrapped up as a literary thriller. It was long in the writing and brings together all the different aspects of my own life and work, and yet the idea came to me in one instant, more than 10 years ago.

I was studying for my master’s in theology, having come to faith after a long struggle between my head and my heart, wanting to understand it better. We had a task: to review the then Pope Benedict’s first encyclical, Deus Caritas Est (God is Love). What was praised by the Catholic Church and many commentators for what Ruth Gledhill called ‘”its beautiful and passionate writing” and theological rigour seemed to me to set up such an idealised nature of love that no human being could possibly come close to it.

An encyclical is addressed to the world, not just the Catholic Church, and this one had nothing to say to anyone who doesn’t support the church’s position that only in a heterosexual marriage and when “open to procreation” can sex be approved.

The encyclical failed to address any of the new approaches to gender, embodiment, sexuality and sexual orientation in our postmodern or “transmodern” world. There was nothing either to help or offer guidance with all the difficult and complex moral and ethical dilemmas faced in the modern age by us imperfect beings in an imperfect world. In short, it was an epic fail.

I had spent a great deal of my early career involved in women’s reproductive rights. I worked for various charities and sat on the Committee to Defend the 1967 Abortion Act, and worked with Spanish groups trying to set up contraception and abortion services after Franco’s death.

I saw at first hand the very real pain and suffering and the struggles faced by women who found themselves unwantedly pregnant, and the moral conflicts they faced. The language used by the Catholic Church around abortion, as well as on issues such as homosexuality and transgender, is dismissive and horrible.

What could happen to shake these popes and cardinals in the Vatican, wrapped in their dogma, surrounded by medieval walls and completely divorced from the reality of people’s ordinary lives, desires and problems? How, in particular, could they ever understand a woman’s lived experience, what it is like to be unwantedly pregnant, or the lives of those who feel different?

And then the idea came to me. It was only if one of them became mysteriously pregnant, I thought, if they desired to end it and were afraid of childbirth, if they discovered that they were not male as they had thought, that they would understand. And I liked the idea that they could be intersex, since I had been a tomboy as a child and had felt frustrated with the gender roles in our society when I was growing up, especially since my then ambition was to become an astronaut.

Yes, this seemed an absurd idea for a novel. Was this even possible? Could I make it convincing? Happily, my first degree was in biochemistry, which included a module in molecular genetics. I looked at scientific papers and found that a rare condition exists where two early embryos fuse, one male and one female, and then go on to develop as one individual, but with a random distribution of male and female cells and characteristics.

One case study caught my eye – a person with one ovary and one testis, who appeared to be male. And there had been 11 live births to such people. So, while of course it was extremely unlikely, it was indeed possible – and so it needn’t be a miracle, though of course people would suspect that it was.

My Pope, Patrick, is the first Irish Pope. I chose an Irish Pope because there has never been one, so I felt that he couldn’t be thought to be based on anyone specific; and because I have always identified as a Celt rather than English, as my Welsh, Scottish, and distant Irish ancestry far outweighs my English blood.

It also seemed appropriate in terms of the enormous changes that have taken place in Irish society in the last few years, with the diminishing power of the church, tarnished by child abuse scandals, and the legalisation of abortion, which happened towards the end of the writing of the novel.

At first, it was hard to like my Pope Patrick. He started off as dogmatic, rigid, fussy, a bit like Benedict himself. And then Benedict resigned and we had Pope Francis – a different kind of character altogether. My Pope changed too as I recreated his childhood.

As I wandered round Cork where my cousin lives, and where it was therefore convenient for Patrick to have grown up, he began to become human. I realised that as a child he had been mocked for being different, something I had always felt at school. He was desperate for human love and connection, and found himself in a position where this was impossible to achieve.

This human love is of course mediated through touch, something withheld from him by his mother and father; his difficult relationship with his parents rested on secrets which he uncovered only after his father’s death.

As the cardinals in my novel opposed him and threatened his position, even took steps to remove him, I felt more and more sympathy with his predicament. And as the story unfolded, and his faith was shaken, it reflected my own struggles with Christianity, something which as a scientist I had always found hard to believe, and yet which constantly tugged at my heart till I could no longer resist it.

I tried to write the book with humanity, and respect. I don’t have any wish to denigrate religion, and indeed, there are passages in the book based on my own experience of prayer and God’s presence. The Catholic Church today is torn, as is my novel, between those who want things to stay as they are and those who want to make the faith more relevant in the modern world. My novel is a way of engaging with this debate, asking questions and inviting people to share in the experience, rather than giving any definitive answers.
Virgin & Child is published by Barbican Press, priced £16.99

Benjamin Zephaniah: ‘Coppers were standing on my back and I thought, I’m going to die here’
Real news has value SUBSCRIBE