The former prince of the Nazi regime, who still defends his father 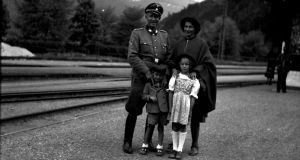 Philippe Sands may have met more war criminals than anyone else in the world. “I’ve sat with mass murderers who are totally regular decent folk when you’re sitting having a cup of tea with them,” he says. “I’ve met their partners. I’ve met their children.

“I’ve had the experience, a couple of months ago, of doing a hearing in the International Court of Justice opposite Aung San Suu Kyi. She’s sitting literally three feet from me, and she stands up and defends the indefensible. She does it in a beautiful tone, using beautiful words, a very elegant and persuasive individual.”

As a barrister and human rights defender, Sands has been involved in the prosecution of crimes committed in the former Yugoslavia, Iraq, Rwanda and Congo, along with Pinochet’s Chile, the US detention camp at Guantanamo and the persecution of Rohingya in Aung San Suu Kyi’s Myanmar.

“What you learn in my day job is that nothing is ever what it seems,” he says. “You have to treat everything with an open mind and expect the unexpected. And, I suppose, in the work that I do, that’s what I’ve come to understand.”

Sands has brought that understanding to his work as a writer. His best-selling book, East West Street, won the Baillie Gifford Prize, the most significant award for non-fiction writing in the English language. East West Street sprang from a trip Sands took to Lviv, the western Ukrainian city that was the birthplace of both his own grandfather and of Hersch Lauterpacht, the Jewish legal theorist who laid the intellectual groundwork for much of what we now know as international human rights law.

Following the interwoven personal and intellectual strands of history that stretched from Lviv to Vienna, Paris, London and the US, Sands captured both the tragedy of the Holocaust and the ethical and legal response to it in the decades that followed.

One of those he met along the way was Niklas Frank, son of Hans Frank, who ruled occupied Poland for the Nazis and was executed at Nuremberg. Niklas, who repudiates his father and approves of his conviction and execution, introduced Sands to Horst Wächter, the focal point of Sands’s new book, The Ratline.

An engaging, somewhat eccentric septuagenarian who lives a frugal life in a crumbling medieval Austrian schloss, Horst is convinced his father was not a war criminal, but an unfortunate victim of turbulent times, caught up in events outside his control.

Horst’s belief in his father’s innocence flies in the face of the evidence. Otto von Wächter was a lawyer, a committed Nazi and a member of the SS who rose to high command in the parts of eastern Europe where genocidal mass murder was at its most industrialised and terrible.

As governor of Kraców, he set up the walled ghetto in which Jews were incarcerated, and which few survived. Later, he was sent to Lviv as governor of Galicia, where hundreds of thousands of Jews and other undesirables would be murdered or transported to camps for extermination.

Sands has no doubt that, had Otto von Wächter stood trial after the war, he would have been found guilty and hanged. “There’s just no ifs and buts about it,” he says. “His closest friend and colleague Arthur Seyss-Inquart [administrator of the Netherlands during the Nazi occupation], who did no worse than him, was one of the 22 defendants in the main Nuremberg trial.”

Seyss Inquart, who was hanged in 1946, was Horst Wächter’s godfather. “And Horst goes to sleep every night in his bedroom with a photograph of his godfather hanging above his bed, which has taken me a bit of getting used to,” says Sands.

Inside Politics · Interview: Philippe Sands, author of The Ratline

One wonders how he can tolerate Horst’s seemingly wilful blindness to the crimes of Otto, who was probably responsible for killing his grandfather’s entire family. There are two reasons, he offers. The first is that Horst never tries to conceal any of the extensive family documents and archives he holds on his parents’ lives and activities.

Unlike many other Austrians, including other members of the Wächter family, Horst is not trying to bury the past. “At no point in 10 years have I asked Horst for a document and he said to me, no, you can’t have that. He’s been utterly and totally open.”

The second reason is that Sands sees Horst, too, as a victim. “I do feel empathy for him,” he says. “He’s a damaged person. Horst lived the life of a prince until he was six years old, and then in 1945, his world collapsed. It all disappeared literally from one day to the next.

The Ratline began as a 10-part podcast for the BBC in 2018. Part detective story, part romance-adventure and part horror drama, It tells the story of the relationship between Otto, a dashingly handsome lawyer, and Charlotte, a vivacious young woman from a wealthy family. Their passionate and at times turbulent courtship and marriage plays out against the backdrop of interwar Vienna, as Austria struggles to find its place in the world following the collapse of its empire.

In the podcast version, Stephen Fry voices Otto and Laura Linney plays Charlotte as their letters chart their lives together while he rose through the ranks of the Austrian Nazi party. At one point he had to flee to Germany because of his part in the murder of the Austrian chancellor. Returning in triumph after Hitler’s Anschluss, he was instrumental in the removal of Jews from the Austrian civil service, professions and universities before moving further east.

How important, I wonder, is the fact that this is a story about Austria, a country which seems to have avoided a reckoning with its Nazi past.

“My hunch is that one of the reasons that Niklas [Frank] and Horst have taken different paths is that Niklas has lived in a German environment,” says Sands. No country has engaged with its past as Germany has.

“By contrast, Austria, from the 1950s, was treated as ‘Hitler’s first victim’. Whereas in fact, if you look at who the most willing executioners were, many of them were Austrians. The idea that somehow the Wächters are victims of the Nazis is a travesty. And yet the Austrian narrative allowed that to be told.”

After the war, Charlotte would talk about the war with sadness, he says. “About her wonderful husband. How he was killed in the war and how they knew absolutely nothing about what had happened. So I think Horst grew up in that environment.”

Sands is unblinking about the complicity of people such as Charlotte in what happened under the Nazis, but perhaps because of his own experiences in court, is always interested in moving beyond a simplistic caricature of monstrous evil. In the book, the Wächters come alive as cultivated, often attractive people, and Sands can also understand the argument that they were carried along by historical forces beyond their control.

“It’s not justifiable, but it’s understandable,” he says. “Austria went from being a global superpower to a rump state in the space of weeks. That is coupled with a vast influx of refugees from the east. Most of them are very poor Jews. And all of a sudden this wealthy, fabulous society, the place of Freud and Mahler and art and culture and money and the emperor and the opera house, is an impoverished, weakened country. And in those circumstances, the hatreds begin.

“Charlotte comes from a vastly wealthy family. Where does her anti-Semitism, her hatred come from? That is much more complicated to explain, but it plainly comes from teachings in that community and possibly also from their own churches.

“It’s a complex area. How does someone like that get caught up in mass killing, then turn a blind eye to it or worse become complicit in it? That’s a really worrisome question, because it raises the question, what would I do? What would you do? Can we put our hands on our hearts and really say there are no circumstances in which that wouldn’t happen? And I think the answer is no, we can’t.”

Otto and Charlotte’s story did not conclude in 1945. The Ratline’s title refers to the underground Nazi escape route out of Europe facilitated by sympathisers, many of them in the Catholic Church.

After three years on the run, Otto made his way to Rome, where he lived undercover in a city swarming with Cold War agents, fascist fugitives and other postwar human debris. His life ended suddenly and mysteriously in 1949 amidst intrigue and suspicion.

Sands spent a lot of time sifting through archives in Rome, attempting to discover what really happened (Irish bishop Paul Tighe, best known these days as Pope Francis’s social media manager, is among those thanked for their help).

This year the Vatican announced it would open records relating to Pope Pius XII’s actions during and after the war. Does Sands think this will expose collaboration between the Vatican and the Nazis?

“I suspect that when coronavirus is over and we return to the archives, material will emerge which will shed light on what Pius XII knew and did and didn’t do,” he says. “But my own sense of it is it’s a complex story. One has to address these matters fairly and honestly.

“I think it will be painful for some people that he didn’t do more. But it will be disappointing for others who seek to point the finger of blame. That, in fact, he did rather a lot more than some of the naysayers like to say. Pius was caught in a particular political moment.

“What I discovered through the Wächter archive is that Otto was caught also in that political moment. And what we stumble across is a literally unbelievable alliance between the Vatican, the Americans and former Nazis that you could not invent.”

The Ratline is published by Weidenfeld & Nicolson