Interview: The travel journalist and author has set his latest novel, Hunters in the Dark, in Cambodia, after a trip there to cover the genocide trials awakened his interest in the country 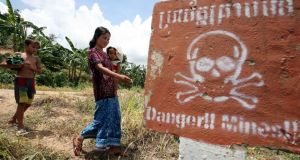 Pailin, Cambodia, which was run by the Khmer Rouge until just eight years ago and is the setting for Lawrence Osborne’s new novel, Hunters in the Dark. Photograph: Tang Chhin Sothy/AFP/Getty Images 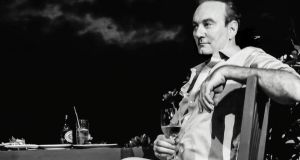 Lawrence Osborne: ‘I never knew how the book was going to end when I started writing it’

It was probably only a matter of time before professional traveller Lawrence Osborne set a book in Cambodia. Although the events of his novel The Forgiven unfolded in Morocco and another in Macau, Cambodia was a place that got under his skin when he was in Phnom Penh in 2008.

“I was sent there to cover the genocide trials in 2008 by Vogue, of all publications. Can you imagine!” he roars laughing, as perplexed as we are that the fashion magazine would show such interest in the Khmer Rouge’s wrongs. “When you go there to find out about its political history, you also become curious about its physical texture, which has everything to do with its recent past. On an emotional level, it’s gripping and disturbing and magnetic, though it was many years before the idea occurred to me to write a story there.”

The eventual result is Hunters in the Dark, a chilling novel of an expatriate, Robert O’Grieve, who wins ill-gotten money in Pailin, a border town that was run by the Khmer Rouge until just eight years ago. The bad juju follows the cash as it is appropriated by a string of shady characters: first a suave but drug-addled American, then a desperate taxi driver, then a corrupt cop who had served under Pol Pot’s regime.

“The reviews are coming out now and they’re talking about how meticulous the plotting is, which is ironic because I

never knew how the book was going to end when I started writing it,” Osborne says.

“I think one of the reasons the plot became intricate but fit together is that I let the ball roll down the gradient and followed it; you can see how one thing leads to another. In a sense, it’s a very Buddhist plot. It’s fatalistic.”

Following the karma of the story, he points out, is opposite to a typical western structure, which relies on character development and thus free will.

The southeast Asian setting plays an important part and, unlike in much expat fiction, it’s set in the present day. So, for example, our protagonist writes home just enough to prevent his parents in Sussex from worrying, and our bent cop professes his love of HBO’s Vikings.

“There’s nothing worse than exoticising things,” he says. “God knows, writers – and journalists are the worst offenders – make things look better or worse depending on their agenda.” Osborne tries to steer clear of surface-level rumination whether writing fiction, travelogues or pieces for Newsweek and the Wall Street Journal.

Osborne blames his nomadic nature on Irish genes (his late mother was from Clew Bay in Co Mayo) and his sense of being an outsider during his formative years as a scholarship student in Cambridge. He was born in England and has lived in New York City, Paris, Mexico, Istanbul and, since 2011, Bangkok. The 56-year-old is the type of charmer who makes friends easily. What’s unexpected is that it’s more to do with his active interest in others than his imparting of worldly wisdom.

I imagine his life in Bangkok – chosen for the fresh air to help his emphysema and low cost of living to allow him the time to write – is spent at lavish dinner parties fuelled by enough Sang Som rum, conversation and heat to last until daybreak. But he rejects the idea of being a bon vivant.

“There’s a certain amount of hedonism in travel itself,” he says. “But I don’t go to parties too much; that’s one thing about growing older, I veer away from that now. I have a quite monastic side. It’s a party town and you can do that all day every day if you want, but for me, that would defeat the object of going there, which is to work.”

Consequently his routine involves waking up late, going for a swim to clear the lungs, then running errands and administration in the heat of the day.

He might get a two-hour massage (“it’s only $40, so who cares?”), spend time with his Thai girlfriend of three years or meet friends.

He writes in the cool of the night and he concentrates on fiction more than journalism. “In your 20s and 30s it’s fine and you do some interesting stuff, but as you get older, you have to find a better revenue stream. I wrote some non-fiction books, and you don’t make any money from it. But fiction is interesting. People will tell you there’s no money in it, but my first book, The Forgiven, has just been picked up to be made into a film.

“I have two, potentially three, options, and they give you the option fee plus 3 per cent of the production costs as a lump sum of cash. So if you live as a modest writer, that will last you a long time.

“I still do travel journalism even though it’s bullshitty – it’s hard to write the way you want to write because American publications always rewrite. But they send you to interesting places and they pay for everything. Plus it’s a very agreeable break from daily writing.”

The reach of Hollywood

His last major mission, in November, was a surreal-sounding trip across Mongolia with Fast and Furious actor Michelle Rodriguez and her friends. “It was an absolute hoot. Lots of vodka, lots of caviar. All across Mongolia everybody knew who she was. On our way down to the Gobi desert, we stopped off at this tiny cheese market where I didn’t believe anyone would recognise her, but when we walked in, it was pandemonium. [Puts on a curious accent] ‘Oh! Michelle Rodriguez!’ Everyone had to take a selfie with her. It was an extraordinary insight into the reach of Hollywood.”

How did she cope away from the comforts of LA? “Well she’s a Dominican lesbian from the hood,” he says with his hearty laugh. “Everywhere we’d go, she’d say, ‘Daaamn, these bitches are fine’.

“I adore her, she’s a fun woman. It was my birthday while we were travelling, so she threw a birthday [party] for me. She’s an absolute sweetheart.”

He has spent the past few months in Santa Maddalena, a Tuscan writing retreat used by Colm Tóibín, Bruce Chatwin and Zadie Smith, among others.

Having already offered his account of life in the Thai capital in 2010’s travelogue Bangkok Days, he aims to update its representation in fiction with the forthcoming book.

“What we have currently is crime novels like John Burdett’s and Stephen Leather’s. Some are actually very good, but I think the whole subject matter is dated and cliched, so I hope to revise it.”