Kruso review: A fall from grace before the fall of the wall 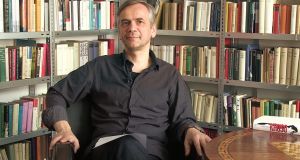 A tragedy has caused Edgar – Ed – to retreat into a world of literature. He is a student upon whom his professor can depend. If in doubt, quiet, traumatised and obsessive Ed will be the one who will recite the work of whatever poet comes under discussion.

Dr Z suggests that Ed consider writing his final thesis on the Austrian Expressionist poet Georg Trakl. Ed duly accepts and stays up for two nights to read everything he can find in the library. Having risked a shaky ladder to fetch the books from a high shelf, he realises he is drawn to the idea of falling. It suits his state of mind as he continues drifting through grief.

German poet Lutz Seiler has brought all his art, linguistic ease, flair for dazzling images and mastery of what he describes as “the nervous systems of memory” to this extraordinary debut novel about a young man in free fall during the closing months of the old GDR. It is 1989 and the old order is about to collapse, but Ed’s desire for flight is more about his personal needs. Still he battles on, attempting to fill the void left by G, his girlfriend whose horrific death has placed him in a vacuum.

Sympathy has begun to ebb as time passes. Ed studies on, reading and committing to memory poem after poem, as if words are his only lifeline. But then G’s cat vanishes. A plan begins to take shape. “Edgar Bendler had decided to disappear – a sentence that could have come from a novel.”

Ed makes meticulous preparations, intending to travel light, although he does pack an oversized notebook. (“It was bulky and impractical, but it was a gift from G.”) While tidying his flat he looks through the contents of a shoebox and finds a map of the Baltic coast. The coastline has been traced in blue while specific sites were underlined with a ruler.

He stares at the markings. “It’s possible, very possible, that you did this, Ed,” he says to himself. But he can’t be certain, and this interests him as his memories flow through the novel in the form of a retreat from the life he is living. Perhaps it was his father’s map.

Within pages, Seiler has established distracted, heartbroken Ed as an engaging Everyman, damaged and real. The poor fellow pauses to look around the apartment he is about to vacate for the summer. “In farewell, he wanted to play some music: soft, very soft music. He stood mindlessly in front of the stove for a time, until he realised he could not play the record on the burner, that the burner wasn’t a turntable.”

The reference to music is inspired. If ever a novel was written as a symphonic gesture, Kruso is it. Reading Kruso is similar to listening to music, and the narrative both requires and confers a musical engagement.

Memory becomes a thematic refrain that is brilliantly sustained. The award-winning American translator, Tess Lewis, conveys the essential strangeness of the laconic, at times fantastical narrative, which triumphs through dialogue that consistently replicates the randomness of everyday speech. The ultimate power of Kruso rests in the characterisation of Ed, who responds to his surroundings with the forensic grasp of detail peculiar to being in shock. Meanwhile, his memories, many of which are from his boyhood, persist, often with a haunting beauty.

Early in the story there is a wonderful scene at the train station, where Ed is approached by an old man seeking help in moving a wardrobe. The approach is ambivalent and Ed notices how the man’s “stiff, shiny pompadour” of brown hair “slipped down to the nape of his neck”. Then the transit police appear. “With them was a dog, which kept its head lowered as if ashamed of its role.”

The smell of the sea greets Ed even before he leaves the train. As a child he had been brought to the Baltic, but his destination is a small island off the coast. On Hiddensee he hopes to heal his heart. The idyllic island, with its connections to playwright Gerhart Hauptmann (1862-1946) is famous as a holiday retreat, a sanctuary for hippies and dreamers, and, far more poignantly, as the place from which many East Germans attempted daring escapes by swimming to Denmark. In time, this vast army of dead, unclaimed victims begins to preoccupy Ed.

It is not difficult to be accepted on Hiddensee. Ed succeeds in getting a job washing dishes at the Klausner, a restaurant. Here he meets the enigmatic and unusually democratic leader of the seasonal workers, Kruso. There are obvious references to Daniel Defoe’s Robinson Crusoe: This Kruso is clearly in need of a companion, and in Ed almost immediately identifies a fellow grieving kindred spirit. But Seiler’s magnificent novel is far closer in imaginative conception and philosophy to Thomas Mann’s The Magic Mountain. There are also echoes of Alain-Fournier’s Le Grand Meaulnes and, thankfully only fleetingly, Aldous Huxley’s Brave New World.

Seiler has written a literary novel rich in allusion and cross references. But unlike, for example John Burnside’s clinical and heavy-handed Ashland & Vine, which reads as a dogmatic exam thesis, or Nadeem Aslam’s more opulent if laboured approach, Seiler’s style is relaxed and unaffected, his images invariably taking the reader by surprise.

Back in the world

Kruso the character, devoid of all irony, is not Prospero, nor is this novel a reworking of The Tempest. The endless washing of dishes is juxtaposed with life-or-death escape attempts. The epilogue is a daring change of voice and tone. It is as if Ed has returned to the real world.

As a poet best known to date for his superb collection In Field Latin, Seiler has dramatically revised the revered German tradition of nature poetry. The East Germany in which he grew up is gone and much of the natural environment lost. Seiler is not nostalgic; his vision is profound, seductive and humane, but not at all romantic. His art is such that he makes this big, dense and lively novel irresistibly readable because the writing appears effortless.

Kruso is an exciting, expansive work of German literature; it may well prove one of the major novels of the 21st century.

Eileen Battersby is Literary Correspondent and author of Teethmarks on My Tongue.