Killing Commendatore review: a Japanese Gatsby in a subconscious Wonderland 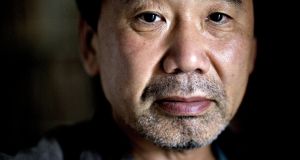 Haruki Murakami: More ringmaster than master, a clever imagination playing to the crowd

Being one of those, you know the type, who wings it at literary discussions, MA seminars, on Rick O’Shea posts, pretending they’ve actually read the Japanese master Haruki Murakami, I felt that finally coming to him now, without preconceptions or the desire to genuflect – a metaphorical Murakami virgin – would put us on an equal footing. (He’s never read me either.)

The teacher inside takes out the biggest red pen she can find. Okay, Murakami, let’s see what you’ve got! Excellent, I write below the striking prologue – loving the faceless man and the penguin charm offered in exchange for a portrait.

An unnamed protagonist relates his story; divorced, 36, a portrait painter, he lives alone in a house on top of mountain (an inner landscape kind of mountain), across the valley from Jay Gatsby’s white-haired Japanese cousin, the great Menshiki. The man-boy artist makes endless cups of tea, stares at canvases, and belts out similes so big, I duck to take cover. Predictably enough, our painter/narrator is desperately trying to rediscover his creative genius and to develop his own artistic style. But as I plough on, red pen almost spent, it all starts to read like the first draft of a book, the big version of the big book, of Genesis, where everything is included and then included all over again.

Like Lear’s fool, the Commendatore could be an internal guide, a kind of metaphysical sat nav

Then, out of nowhere, and I mean that literally (nothing metaphorical, metaphysical, meta anything about it), a grey horned owl appears in the attic space of the house (clearly by house, I mean subconscious mind); there is the promise of a 1,000-year-old, bell-ringing, mummified Buddhist monk buried in a hole, close to the house (far too close), which may turn out to be a well – wells are highly symbolic. We could be looking into the unconscious mind at this point, that old reservoir of feelings, thoughts and urges, buried deep, deep inside. The main man’s fascination with his dead sister’s small breasts coupled with the short distance between the well (the unconscious) and the house (the subconscious), has me frantic at this point (the conscious).

For the life of me, I can’t figure out the need for the monk, or perhaps in some unexcavated part of me (the preconscious), I don’t want to. Of course, no line-up would be complete without a two-foot-tall titular Commendatore, wearing traditional Japanese garb, who introduces himself as an “idea” incarnated in the figure that apparently fell out of the mysterious painting hidden away above in the attic (remember the symbolism) with the owl. Though I’m not entirely sure of his purpose. Like Lear’s fool, the Commendatore could be an internal guide, a kind of metaphysical sat nav, conjured up to voice the interior monologue of our rather low relief painter friend – or maybe Murakami just put him there, because he could.

Killing Commendatore often feels lazy, like a painting-by-numbers version of an Old Master done in crayons

There’s a whole host of characters in this book, skipping around in the magic realism more as “types” than anything else. The holy grail, as usual, is self-knowledge, enlightenment even, for all its commercial worth. It is rather difficult to measure the characters’ levels of successes or failures when they remain wholly flat-pack, IKEA types (assembly required). And therein lies the fault of this big, feral beast of a book: the in-world mythology of magic realism is so bizarre, so consistently inconsistent, it distances reader from character(s), rendering them all more like the Commendatore himself: little more than “ideas”, sample people, manifest in the borrowed forms of figures from other places, other stories, other Wiki pages.

Cue explicit intertextuality (my favourite). Jaguar-driving, chino-wearing Gatsby is present, resplendent in all his loneliness and mystery. Alice, shipped from Wonderland, frolics about, like a rash. Shadowy, shape-shifting Dorian Gray hovers, on some other astral plane, contemplating new perspectives, new ways of seeing. Aesop, the great fabulist, stands centre stage. And Aesop’s on acid! There are so many migrants in the passages of this labyrinth, it seems theatrically reminiscent of Noah’s Ark. But who is being saved?

References to other texts, paintings and music are woven densely, like thick clothes-line rope, into the narrative, but, despite its length, its multi layers, its complexity, Killing Commendatore often feels lazy, like a painting-by-numbers version of an Old Master done in crayons.

However, it is the Crayola effect that makes this work original – childlike in its telling, but grand in the big, loud, colourful marks it makes. Too contrived in its madness, too garish and long, the words spill out over the pages like the clutter of a hoarder in therapy. But it’s one hell of a session. One hell of a tale.

Murakami the master? The ringmaster maybe – a funny, entertaining performer; a clever imagination playing the crowd.

Sir, I applaud you, I scribble across the last page!