Kevin Curran: ‘writers should be writing against power’ 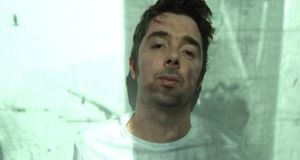 Kevin Curran: write for no one other than yourself because, believe me, when you read that manuscript for the 50th time, if you’re not into what you’re trying to get at, you’re screwed

The one that sticks out is The Lord of the Flies. I’ve a vivid memory of sitting on my parents’ couch as a youngster and being dumbstruck by the death of Piggy.

I’m going to cheat here and say any of The Adventures of Tintin.

Every week there seems to be so many new writers and old writers I’m only discovering, but Rachel Kushner’s The Flamethrowers really blew me away. And Frankie Gaffney’s Dublin Seven is such a breath of fresh air, and alongside that is Karl Parkinson’s The Blocks. Between the two of them they’re creating a whole new literary scene!

John Updike writes about the collapse of the Twin Towers in a short story, Varieties of Religious Experience, with this line: “when, as abruptly as a girl letting fall her silken gown, the entire skyscraper dropped its sheath and vanished with a silvery rippling noise”. To make you see something new through words (especially with an event that is synonymous with television) is some achievement. And Saul Bellow has an amazing few lines at the beginning of his short story, Something to remember me by, that I can’t quote (it’s too long) but it concerns a turntable and a vortex and how we sometimes see life as moving along smoothly (the turntable), but really it’s spiralling downward (the vortex). Again, incredible imagery.

I’m going to cheat and name four. Liam O’Flaherty’s version of Ireland just isn’t in vogue anymore. Sean O’Reilly mightn’t be under-rated, but definitely under-appreciated. Philip Ó Ceallaigh’s work seems to have been forgotten in all this “new wave” talk, and Christine Dwyer-Hickey definitely deserves to be much more highly rated.

Print all the way.

Three first edition, leather-bound monstrous slabs of books containing The Traits and Stories of the Irish Peasantry by William Carleton. (Got them online from a garage in Boston.)

I write wherever I can get a moment – standing waiting for the train, in a car park, anywhere and with anything that will put words on a page. Pens, pencils, markers, anything.

The Barrytown Trilogy. I was about 12 when I read it and suddenly a new world of writing possibilities opened up.

My most recent novel, Citizens, is a dual narrative from 1916 and 2011. So, the 1916 bits were heavily researched. My great-grandfather’s Bureau of Military History report was my prime source along with a book written by a newsreel cameraman from the 1920s. On a practical note, I went to O’Connell Street two years ago around April 20th and stood where I reckoned Pearse might have when reading the proclamation and then took pictures of the shadows I cast…. I was checking where would be best – if I was a newsreel cameraman in 1916 – to stand for the best light. Not quite Kevin Barry camping out in a cave, but field-work nonetheless.

Don DeLillo’s Libra. As I was reading it I had to remind myself it was fiction, such was the level of intensity and insight given to the lives of the main characters, most notably, of course, Lee Harvey Oswald. It’s an incredible book with a wide-screen scope that manages to encompass a defining political and cultural moment for a whole nation while opening up new avenues for fiction along the way.

Since none of my friends have kids that age (the oldest is about 4) I’ll hold off on that one for another 14 years. Who knows, by then there could be a book I’ll really want them to read.

Anything and everything by Camus. I only got into him in my mid-twenties. Amazing writer.

Get out into the world and live. Then write. And write for no one other than yourself because, believe me, when you read that manuscript for the 50th time, if you’re not into what you’re trying to get at, you’re screwed.

I’ve mixed feelings about this. The official world loves them, and they do get your book out there, but a tweet from someone I respect or a recommendation from a fellow writer can, and probably would, be more gratifying.

Nowhere, I hope. Especially the independent Irish publishers. That’s where the cutting-edge literature of our time is coming from. Liberties, New Island, Lilliput, Tramp Press, Stinging Fly… think of the stuff they’ve put out recently, and what’s to come with Oisin Fagan and Roisin O’Donnell amongst others. Incredible.

Navel-gazing literature is all the go and anything that is overtly political, or even subtly political or confrontational is kind of ignored or pushed out of the way. Maybe it is the unhealthy mixing of state funding for full-time writers or things like “The Laureate for Fiction”, but writers should be writing against power. Not one big name in Irish literature has even attempted to gauge the feelings on the street and engage with contemporary social realism without sentimentalising it.

Absolutely everyone has a story and tragedy isn’t exclusive to a Shakespearean stage.

If they don’t reply to your email in a matter of days, as much as it hurts to accept it, stop hoping and move on – they’re not interested. (Other writers will know what I mean… I hope.)

What writers, living or dead, would you invite to your dream dinner party?

All of Don DeLillo’s White Noise.

“Our.” It’s a Balbriggan term that I’ve had to remove from anything I’ve ever published on the editors’ insistence. It’s “our” pronounced as “au-wer” and it’s used as a substitute for a name, like a kind of personal pronoun, as in, “How’s it going, our?” “Our lad” is my second favourite – for the same reasons.

Michael Collins during the Treaty negotiations.

What sentence or passage or book are you proudest of?

In my debut, Beatsploitation, I have a scene where the teacher listens through a partition to two African kids talking. It captured perfectly the essence of the whole book, and, as far as I’m aware, a scene like that – with two black characters just talking – hadn’t been written before in Ireland.

What is the most moving book or passage you have read?

A scene in John McGahern’s The Leavetaking when the main character’s mother passes away. Powerful stuff.

My son, Sebastien, is nearly three, so every book he reads at the moment brings with it a whole new world of enjoyment.

Kevin Curran is the author of Citizens and Beatsploitation (Liberties Press)