As this gripping, readable study of the Armenian genocide makes clear, Germany long before the Nazis had come to terms with ‘Völkermord’ 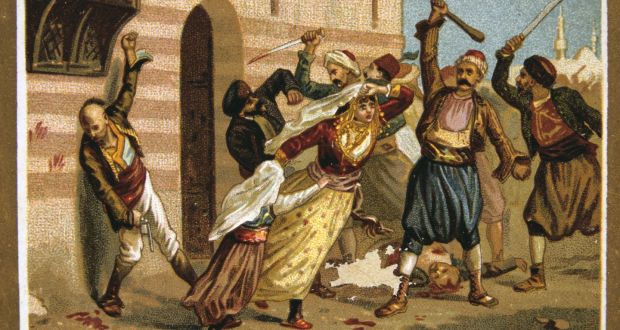 Book Title:
Justifying Genocide: Germany and the Armenians from Bismarck to Hitler

On the eve of the Nazi invasion of Poland that began the second World War, Hitler allegedly quipped, “Who, after all, speaks today of the annihilation of the Armenians?” Today, the question has lost its rhetorical ring – indeed, a great many people speak of that annihilation.

2015 marked the 100th anniversary of the 20th century’s first genocide, the killing of perhaps one million Armenians by Ottoman Turks. The centenary witnessed an outpouring of books and media attention devoted to the mass killing. Turkey’s official refusal to accept responsibility for the atrocities – and even to acknowledge their commission – continues to make for political turmoil at home and to earn the nation opprobrium abroad.

Now comes Stefan Ihrig’s fascinating and highly readable account, Justifying Genocide: Germany and the Armenians from Bismarck to Hitler, which suggests that Hitler was wrong even at the time.

Ihrig, a scholar at the Van Leer Institute in Jerusalem, demonstrates that the mass killings of Armenians hardly had to wait the better part of a century to seep into the public’s consciousness. Far from a crime long concealed in secrecy, rumour and denial, the genocide was widely known and reported on from the time of its commission – particularly in Germany, the nation that would soon build aggressively on the Turkish precedent.

Germany and Turkey were allies during the first World War, with the Ottoman-German alliance ratified on August 2nd, 1914, shortly after the outbreak of hostilities in Europe. German diplomats stationed in Turkey knew about the “deportations” of the Armenians from the get-go, and communicated much of what they knew to officials back home.

Johannes Lepsius, a Protestant German missionary, published a remarkably detailed account called Report on the Situation of the Armenian People in Turkey, some 20,000 copies of which were distributed to Protestant vicarages in 1916. Lepsius also lectured to German parliamentarians in the Reichstag about the atrocities. As Ihrig observes, “no other government was as well informed about the genocide in progress as the German government, except of course, for the Ottoman government itself”.

It is one thing, then, to claim that German officials were aware of crimes committed against Ottoman Armenians, and another to say that they were aware of the genocidal character of these crimes. Yet Ihrig convincingly demonstrates that German reports of the day used “fully fledged ‘genocide language’”, describing the carnage as tantamount to “extermination” and the “annihilation” of a people.

Reports even spoke of Völkermord – “people murder”, that anticipated Lemkin’s neologism. German officials recognised that Turkish atrocities represented nothing short of a co-ordinated effort to destroy the Armenian people.

Admittedly, the average German might have known far less, thanks both to wartime press censorship and the natural incredulity that greets reports of stupefying atrocity. But even this changed dramatically in the postwar years.

On March 15th, 1921, in the middle of a crowded street in Berlin, Talât Pasha, the former Ottoman Grand Vizier and a leading architect of the atrocities, was gunned down by an Armenian student. Seized by the police, the student, Soghomon Tehlirian, insisted that the victim, and not the assassin, was the true murderer.

The trial, staged in Berlin, only lasted a couple of days but still was “one of the most spectacular” of the 20th century. The defendant openly acknowledged that he had committed the act but denied his guilt. “I have killed a man, but a murderer I was not [sic].” This defence turned matters on their head: “in the end it was the Ottoman Empire and the victim, Talât Pasha, who were on trial”.

The brief trial ended in Tehlirian’s shocking acquittal; it is unclear whether the jury believed the killing was justified or that trauma had rendered the defendant less than fully responsible for his actions.

In any case, the trial was extensively reported in German newspapers, so claims of public ignorance about the genocide were no longer credible by the early years of the Weimar Republic. And yet knowledge did not necessarily mean condemnation. Rather, Tehlirian’s trial sparked a passionate debate within Germany, not about whether the reports of atrocity were true, but whether the atrocities themselves were justified.

Notably, a great many German newspapers, particularly those on the political right, lined up against the Armenians. This was partly a case of nationalist publications defending the actions of an ally. But the nature of the defence was chilling, especially when read through the filter of German history to come.

The killings, German pundits opined, took place during wartime, and were largely provoked by the Armenians themselves, who constituted, so it was claimed, a fifth column of backstabbers prepared to sabotage the Turks. Armenians were disparaged as a people without a homeland and any sense of national loyalty: clannish, greedy, shifty and committed only to their own power.

While it may seem odd that a European nation should ally itself with a Muslim majority against a Christian minority, Ihrig reminds us that Armenians were viewed less in religious than in racial terms, as constituting a distinct, and decidedly less savoury type of human.

If all this sounds disturbingly familiar, it is hardly coincidence. Ihrig brilliantly lays bare the “confluence” between German anti-Semitic and anti-Armenian stereotypes. Jews and Armenians were treated as “Semitic cousins”, with the latter playing the role of “quasi-“ or even “über-Jews”.

To his credit, Ihrig generally avoids drawing any straight line from German debates about the Armenian genocide to the Holocaust. The Nazis were not, he concludes, simple imitators of the Young Turks. But Turkey had introduced extermination as a way in which a modern nation state could “solve” problems posed by an unwelcome minority.

In spirited fashion, Germany had debated the merits of this solution. And in the decades preceding their own, more ambitious campaign of genocide, many right- wing Germans had responded with understanding if not outright approval.

Lawrence Douglas teaches at Amherst College, US. He is the author most recently of The Right Wrong Man: John Demjanjuk and the Last Great Nazi War Crimes Trial