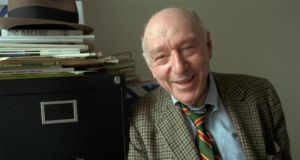 Joseph Mitchell in his office at the New Yorker in 1994. Photograph: AP

It’s well known that this year marks the half-centenary of the deaths of Brendan Behan and Sean O’Casey – indeed, one of the milestones (Behan’s) has already been commemorated by a stamp. But a third literary demise of 1964, just as notable, has been less well advertised.

No doubt it’s because there was no actual loss of life involved. Even so, 2014 also marks the 50th anniversary of the death of American author Joseph Mitchell’s literary career, born 35 years earlier.

The man himself survived for decades afterwards. In the interim, however, he suffered one of history’s longest documented cases of writer’s block, clocking in finally at 32 years, when the physical part of him died too, aged 87.

His silence was all the more dramatic because be didn’t go mad, or become a recluse. On the contrary, he continued to report for work at the New Yorker every morning, always neatly dressed, his outfit usually topped off with a fedora.

He took an hour and a half for lunch, as a rule. Then he returned to his office until it was time to go home. And so it continued, until 1996. In a tribute after his death, a colleague recalled: “Sometimes, in the evening elevator, I heard him emit a small sigh, but he never complained ...”

I don’t know if Mitchell and Behan ever met in New York. They may well have done, because during his much-publicised visits there in the early 1960s, Behan often drank in McSorley’s, the Greenwich village alehouse that Mitchell’s writings had helped make famous.

The many stories Mitchell set in that pub were collected in his best-known anthology, McSorley’s Wonderful Saloon. But if there was an explanation for the epic silence into which he fell in 1964, it probably centres on another series of New Yorker articles, published in book form as Joe Gould’s Secret.

The Joe Gould in question was a real person: Boston-born, Harvard-educated, and by the time Mitchell came to know him, a fully-fledged eccentric, wandering the New York streets by day and by night sleeping in flophouses or doorways.

He was also, by his own plausible account, working on an opus called An Oral History of Our Time, for which he took copious notes. It would be a record-breaking tome when finished, he predicted. As a work in progress, he once estimated its length at 9.25 million words, or “about a dozen times as long as the Bible”. Mitchell first introduced him to New Yorker readers, in a 1942 profile, as “Professor Seagull”. It would be 22 years before he returned to the subject, this time under the headline that became the book title.

Joe Gould was several years dead by then, so Mitchell could safely divulge his secret: that the Oral History had never existed outside his head. Such of the would-be author’s notebooks as could be found contained only random jottings.

The tale’s sad denouement was published in two parts, starting on September 19th, 1964 (the day after O’Casey died, incidentally). It was just as sympathetic as the prequel. And well it might have been, because as Mitchell admitted, Gould and he had had much in common. The Oral History reminded him of a novel he had once planned to write, Mitchell recalled. “I was twenty-four years old at the time and had just come under the spell of Joyce’s Ulysses. My novel was to be ‘about’ New York City. It was also to be about a day and a night in the life of a young reporter ...”

He had obsessed on it for over a year, sometimes sketching several chapters in his head during a subway ride. But as with the Oral History, not a word was ever committed to page. And after relieving himself of Joe Gould’s Secret, Mitchell wrote nothing else again, either.

Maybe it was Joyce, not Gould, who did the real damage. After all, when he broke his silence briefly in 1992, to contribute a preface to a collection of republished works, Mitchell also revealed himself to be under the spell of Finnegans Wake, which he had read “at least half a dozen times”.

As for revisiting his own work late in life, he was pleasantly surprised by its “graveyard humor”. He attributed this to his maternal ancestors, Presbyterian Scots who settled in North Carolina. Yet even here, Joyce’s Wake had beaten him to it. “Every time I read the Anna Livia Plurabelle section I hear the voices of my mother and my aunts,” the octogenarian Mitchell said. Small wonder he gave up writing early.

Caoilinn Hughes: ‘The patriarch is still at large’ in Irish society
4