£30,000 prize for ‘Days Without End’ makes him first novelist to have won twice 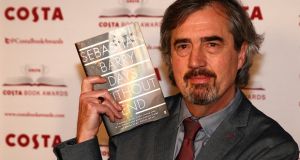 Sebastian Barry with his book Days Without End. Chair of judges Kate Williams described it as ‘magnificent, and searing’. Photograph: Peter Nicholls/Reuters

Barry’s win makes him the first novelist to ever win the overall Book of the Year prize twice. Poets Seamus Heaney and Ted Hughes are the only two writers to have achieved the double to date.

Professor Kate Williams, chair of the final judges, said: “We all loved this magnificent, searing, thrilling book , brutal, terrifying yet with moments of light and beauty. Brilliant writing that takes you to the depths and the heights of humanity, and a voice you simply can’t forget”.

Barry was born in Dublin in 1955 and lives in Co Wicklow. His works include the play The Steward of Christendom and the novel The Secret Scripture, which won the Costa Book of the Year in 2008 and was shortlisted for the Man Booker Prize. 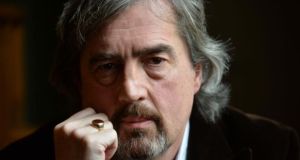 Review: Days without End Read our review of the Costa-winning book

Eoin McNamee, reviewing Days Without End in The Irish Times, wrote: “There is a majestic rhythm to Barry’s prose, deep craft in the shaping of the novel, the impetus of events carrying us through at pace…

“Sebastian Barry is the most humane of writers. The leeway is always generous; beauty is mined to its last redemptive glint…the voice is humorous, compassionate, true. It is his glory as a writer. It is the stern, glorious music of a great novel.”

Also announced on Tuesday was the Costa Short Story Award which went to Jess Kidd and is worth £3,000. She grew up in London as part of a large family from Mayo, where she recently moved. Her winning story Dirty Little Fishes is about a young Irish girl in London. Billy Callaghan from Cork was a runner up in this category.

The runners-up, to the overall prize, who each won £5,000, include Dublin-based author Brian Conaghan, who won the Children’s Book Award for The Bombs That Brought Us Together, and Keggie Carew, who won the Biography Award for Dadland, the story of her 10-year race to unravel the truth about her Irish father’s past as he slips into dementia.

The other two runners-up were Francis Spufford, who won the First Novel Award for Golden Hill, set in 18th-century New York, and Alice Oswald, who collected the Poetry Award for Falling Awake.

The awards, known as the Whitbread from 1971 to 2006, are the only major book prize open solely to authors resident in Britain and Ireland.

Irish authors have enjoyed significant success in the past 12 months. Lisa McInerney won the Baileys Women’s Prize for Fiction and the Desmond Elliott Prize for her debut novel, The Glorious Heresies, Suzanne O’Sullivan won the Wellcome Book Prize for It’s All in Your Head, Mike McCormack won the Goldsmiths Prize for Solar Bones, Sara Baume’s Spill Simmer Falter Wither won the Geoffrey Faber Memorial Prize and Sarah Crossan won the YA Prize 2016 and the Carnegie Medal for One. Paul McVeigh won the Polari Prize for The Good Son and Paul Murray jointly won the Wodehouse Prize for The Mark and the Void.