In praise of older books: Life and Fate by Vassily Grossman (1985) 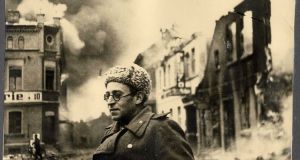 I’m reading Life and Fate on a beach in Croatia. I peek from under my sunhat. Mothers and fathers, children, babies, grandparents. Lying in the sun. Swimming in the warm sea. In Moscow, Croatia and France play for the World Cup. Europe at peace.

My eyes return to the page. The Soviet Union. 1942 -1943. War. Jewish nuclear physicist Viktor Shtrum waits for the phone to ring, the door to burst open, the arrest. Stalin is unpredictable. You never know the hour.

In Stalingrad, Lieut Gen Yemenko confronts Gen Paulus. Their soldiers, men and women, die in their thousands. On the Kalmyk Steppe, Lieut Col Darensky can think of nothing but the lice. “(H)e had spread out his pants and was squashing the lice that infested them. He was moving his lips silently, evidently keeping a tally.”

Viktor’s mother, Anna, writes to him from the ghetto in Berdichev, Ukraine. They will never meet again. The trains lumber towards Auschwitz. Grossman, a war correspondent and witness to the consequences of the Holocaust, takes us into the gas chamber. Strangers: a boy, David, and a woman, Sofya, are together. “She clasped the boy to her with the peculiar strength familiar to the Germans who worked there. . . . (she) felt the boy’s body subside in her hands. . . ‘I’ve become a mother’, she thought. That was her last thought.”

Grossman details life across the vastness of the Soviet Union. The Lubyanka prison in Moscow, the labour camps, fighter squadrons, the shattered wreck of Stalingrad, Viktor’s laboratory. Life as people lived, suffered, died.

When the phone call comes to Viktor Shtrum, it’s Stalin. “One word of his could annihilate thousands, tens of thousands, a people.” He asks if Viktor has everything he needs. “I believe in my work,’ said Viktor.” He was suddenly brave.

Russia 2018. Today’s battlegrounds are its football pitches. Grossman died in 1964, his book suppressed. We read it now with profound gratitude. A warning to us all.