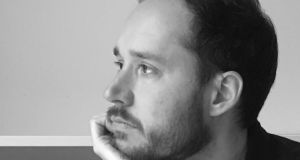 Sam Byers has written a sharp, pacey and anxious book, made all the more unsettling by its close proximity to the now.

In Pieter Bruegel the Elder’s painting, The Tower of Babel, a series of Roman arches, resembling the Colosseum, suggested to viewers the hubris of that civilization, connecting the biblical story with the particular anxieties and cultural understandings of 16th-century Europe. Bruegel’s tower, built on slanted ground, rising up to the clouds but also crumbling in places, is referenced strikingly on the front of Sam Byers’s second novel, Perfidious Albion, in a masterwork of cover design. Here, the tower is made up of the edifices of British buildings – offices of the state, train station facades, apartment blocks – and littered with slogans. (“Celebrating a rich past, creating a new future”, “The rental revolution is here” – these hint at the hubris of corporate political culture that has slipped into post-meaning.) All the while, the cranes and scaffolds and diggers are continuing their work: construction hasn’t even come close to completion.

A satirical, often-gripping portrait of a post-Brexit England in turmoil, Perfidious Albion begins when, one evening a masked man disrupts a literary party in the small English town of Edmondsbury, and begins reading aloud short sections of private emails. Later, a nondescript van rolls up into the town square, projecting a pornographic tape of a local woman, just about covering her face. “We are The Griefers”, the tape announces. “What don’t you want to share?” This is a world in which connection and disconnection are exploited, in which information, anonymity and depersonalisation are mobilised with a disturbing force. Eventually, The Griefers’ project becomes more honed, more explicit: if someone makes a sacrifice, the leaks will end. As the reel of images flicks through the faces of the residents of Edmondsbury, it starts to slow, eventually pausing on one face.

Byers conjures up a recognisable and disorientating world of quickfire information – “Who wants to write something that’s already yesterday?”– where a single tweet spirals out of control, where privilege and exposure run wild, clashing with personal relationships. Perfidious Albion also offers a savage and often brilliant takedown of masculinity in the 21st century. Here, “woke” men outprofit women after gaining a basic sympathy with feminist concerns. As one of the main characters, Jess, muses, it was “the age of beatified masculine emotion. Everywhere you looked, men were sweeping up awards for feeling things.” At one point, she snarkily corners a particularly pompous male writer: “When you feel sad, do you also feel a little bit proud?”

Eventually, the tower of babel begins to descend into chaos. Hugo Bennington, the smoking, ale-drinking, “man of the people” leader of the rogue political party England Always (remind you of anyone?) needs attention, needs something to fan the flames, and finds it in a purposefully misinterpreted tweet about #whitemalegenocide. A local tech company makes headway with its proposal to turn a council estate into a grim social experiment – different entrances for different tiers of residents, where people log in and gain “community points” by offering services to neighbours. This is a dystopia of the very near future – just a few logical steps ahead of us.

Like Luke Kennard’s The Transition (4th Estate, 2017), in which social control is figured through a surreal and grimly funny portrayal of neo-liberalism capitalism and gentrification, Perfidious Albion plays intelligently with the possibilities of data, of manipulation and miscommunication. Jess, who has invented a series of online personalities, including the elusive artist Byron Stroud, and uses her multiple online personae to craft a system of web analysis, tracking the repercussions of her comments, tweets and interventions, mapping the thoughts of innumerable strangers. “It was the online equivalent of a barium meal. She fed ideas into the internet’s hungry maw, then traced their progress through to its bowels.”

Sometimes the critiques are a little heavy-handed – a reader of the Record (a newspaper readers will recognise as bearing striking resemblance to another right-wing British tabloid) reads “not to have his fears assuaged, but to have them confirmed”. The free indirect discourse of the novel – whereby the prose reveals the thoughts and feelings of the characters from a grammatical remove – makes the line between Byers’s satire and the integrity of the characters’s solipsism sometimes difficult to define. But Perfidious Albion is brimming with comic energy, and if it sometimes spills over, it would be curmudgeonly to wish for more restraint. This is a sharp, pacey and anxious book, made all the more unsettling by its close proximity to the now, its knack for collapsing the boundary between the absurd and the terrifying.